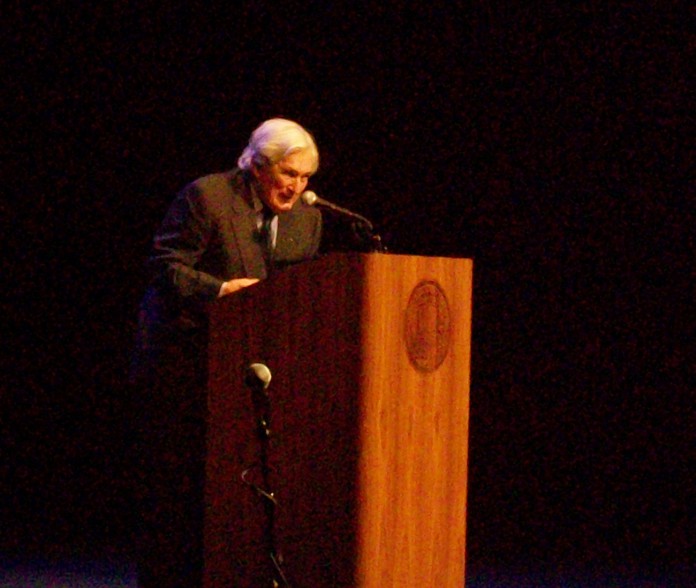 Former World Bank President Sir James David Wolfensohn came to UCSB’s Campbell Hall to give a talk on his new book, A Global Life: My Journey Among Rich and Poor on Monday, January 10. Wolfensohn, who is one of only three people in World Bank history to have been elected a second five-year term as president, used the contents of his book as a springboard to shine light into the various developmental works and anti- corruption programs that he had advanced during his term in the World Bank and that he still currently advocates.

After his first three years as World Bank President, Wolfensohn discovered a reality that was accruing traction in the World Bank – balance sheets were not increasing. The bank was continuously lending money to the world’s poorest nations, who had no sustainable means to repay back their loans. In reaction to this, these nations would keep applying for more loans in order to repay their pre-existing loans.

According to Wolfensohn, what was even more shocking about this circumstance was that the bank had no provision in its system or bylaws that allowed debts to be written off.

“I got to the bank, and here [we were] in this very idiotic situation,” he said.

Wolfensohn sought to resolve the aforementioned situation by bringing debt forgiveness—granted only when certain conditions were met—into the World Bank. Additionally, Wolfensohn began pushing for poverty alleviation as a key aid strategy in working with developing nations. Recognition of corruption and its effects on loans given to nations completed the fundamental thrusts that Wolfensohn stood for during his term as the bank’s president.

“His idea of changing the World Bank from being solely a financial institution to focusing on poverty and social injustices is inspiring,” said UCSB Global Studies major Amy Buchard in reaction to Wolfensohn’s talk.

Additionally, Wolfensohn emphasized the need to recognize and work with the emerging influence that China, India, and the rest of Asia are having on today’s world. He predicts that around 40 percent of the world’s Gross Domestic Product (GDP) will collectively come from China and India within ten years of 2050. Together with the rest of Asia, these nations will be contributing to 65 percent of world GDP.

“The momentum has shifted. China and India, two of the world’s growing [players], are moving forward simultaneously in world affairs,” he said.

Wolfensohn has come a long way from being the young Australian teenager who came to the US with nothing but 30 dollars in his pockets. He remembers the challenges he experienced during his youth and, in closing, relayed advice given to him by David Rockefeller that to this day he still strives to live by.

“You must always remember that in building a career, you must never forget to give something back to the community,” he said.

“It was amazing to sit in front of a man who was worth millions and realize that his humility made him just as human as I was,” she said.