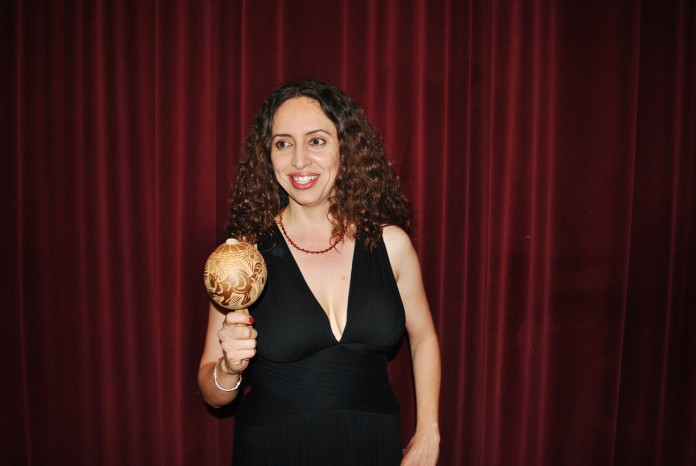 Adelina Anthony brought her one-woman show, “La Angry Xicana?!” to the UCSB Multicultural Center on Thursday, January 20.
“Thank you for coming tonight,” Anthony quipped. “And if you haven’t yet, you will.” With an opener hinting at the pleasure to come, Anthony continued to use her multicultural musings to taunt and tease the filled MCC theater into climax by the evening’s end.

With her shtick consisting of an abrasive and loud stage presence, parodying the stereotype of the “angry Chicana,” Anthony’s act sizzled in south of the border self- deprecation, wit, and feminine facetiousness.

With an act rooted in cultural taboo, lesbian sexuality, and growing up Latina in America, Anthony’s performance offered spectators wit and wisdom. Channeling the consciousness of colored women, Anthony dived into diatribe, disarming the prejudices that protect the politics of racism and sexual bigotry. Like many performers before her, Anthony continued the tradition of using humor to sidestep the sensitive boundaries that typically leave these subjects out of discourse.

“And wait, they give you Brokeback Mountain?” Anthony cried. “That was SUPPOSED to be Brokeback Ranchero, aye!” Anthony made this joke early in her set, which pinned crosshairs on one of her favorite targets: Hollywood.

Anthony’s problem with the 2005 film is that the short story it was adapted from was written about two Chicano cowboys, and instead Hollywood gave us “wholesome whiteness.”

Anthony’s persona and stage presence was purposefully overbearing, obnoxious, and sassy—all elements she derived from the typecasting of Latina characters in television. Her diva personality worked greatly for her routine. A self-proclaimed, “thug and lesbian,” or as Anthony preferred, “thesbian,” her performance offered comedic insights into different perspectives that usual occupy societal sidelines.

Her comedic jests prompted laughter from the audience and she presented aspects of the American experience outside the “funnel of the institutionalized.” Anthony’s viewpoint is one that is channeled through her childhood of growing up poor, homosexual, brown and female in America, all aspects that have now shaped the attitude and angle of her commentary.

Aside from knocking Hollywood, Anthony moved toward any progressive’s favorite punching bag: Bill O’Reilly. Anthony skewered O’Reilly’s broadcasts, announcing that a lesbian gang epidemic was taking hold in America and that these lesbian lawbreakers packed pink pistols to boot.

“Ain’t no butch mamacitas out there carrying out pink guns!” she said. “Billy boy should make a call to Homoland Security.”
Anthony’s charm and character created a performance that was as hilarious as it was eye-opening and engaging.
“I loved it. Her stand up is about put-downs,” said UCSB fourth-year Film major John Cone.

Kay Reghabi, a fourth-year Global Studies and Art major, thought Anthony’s comedy to be both comedic and crucial.

“I was a fan! I love comedy that really focuses on social commentary and she brought that. Her set was really about using comedy to get inside misconceptions, and her sly comments on race and sexuality add a great dialogue for her humor,” she said.

During a free evening of jesting and jokes sponsored by Associated Students Queer Commission, De Colores, and The Resource Center for Sexual and Gender Diversity, Anthony offered students that “came” giggles, amusement and food for thought.

Bob Dylan’s Album is Much More Than a ‘Shadow in the...