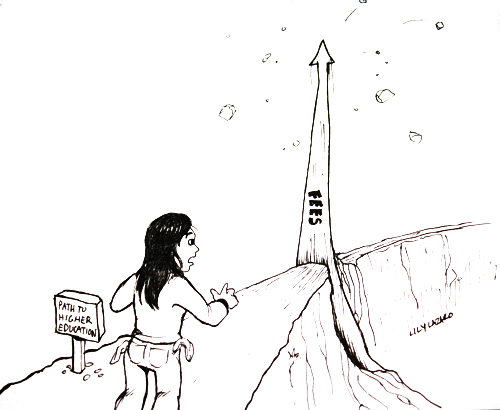 Two weeks ago, UC and Cal State students all over California witnessed the demise of a promise. This promise was made by our state leaders to fund a public higher education system—a system that generates a better workforce and better Californians who are willing to show their gratitude for their college education by becoming productive members of society.

Instead, there was an increase in funding for current prisons all across the state, for keeping prisoners incarcerated longer, and for plans to create more prisons across California.

I don’t know about you, but I’m feeling a bit confused. On the one hand, we are encouraged to pursue a higher education, but on the other we are faced with increasing debt and fewer opportunities to receive loans. Meanwhile, Sacramento expects an increase in number of criminals. Perhaps they believe that fewer college students means more lawbreakers, an interesting thought if you consider that filling classrooms rather than prisons would contradict this equation.

As a current UCSB student, it frustrates me that the state once said that college should be accessible to everyone—a noble principle that separated California from all other states. But with more colleges and more banks closing their doors to students, my frustration must be shared by other Californians. Although there is continued funding for Cal grants and the Blue and Gold Plan, many members of the middle class, like me, have no access to federal aid and have to watch their parents dig into their savings, retirement accounts, 401Ks and Social Security.

Yet as California residents, my parents and I pay three times for my college education: once through sales taxes, once through internal revenue taxes, and once through straight-forward fee payments. As UC fees and state taxes increase, so does my diminishing sense of gratitude to the state of California.

Even though I know going to a UC is still cheaper than most private colleges, who’s to say that twenty years from now there will even be a public University of California system for my kids to call their alma mater? Because once the state stops funding a school system more than its constituents, it ceases to remain publicly accessible to all. Instead, the word PRIVATE comes to mind, and with it the end of a once great egalitarian state called California.