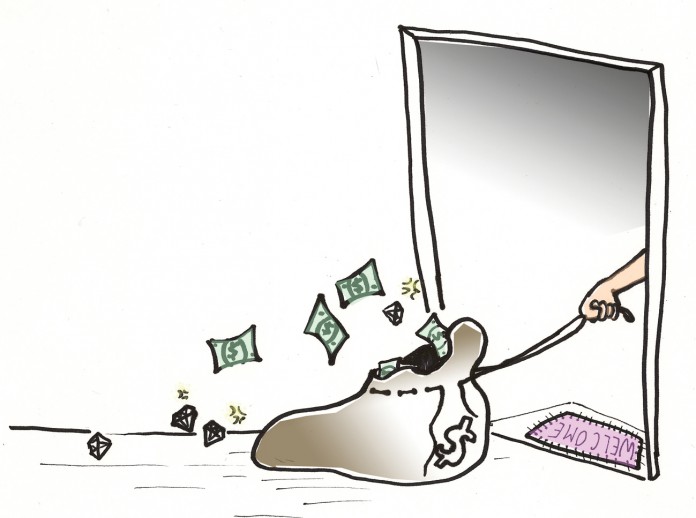 I think we can all agree that Isla Vista is not the classiest place. We accept crushed cans of Natty Light littering stampeded yards on Saturday mornings and hordes of drunkards stuffing their faces with cheesy nachos at 3 a.m. It’s what makes I.V. original and exciting. But what really tarnishes our unique student ghetto is the level of stupidity exhibited by the town’s thieves.

I have been the unfortunate target of three separate robbery attempts already, and have only lived in I.V. for eight months. But from my experiences, I can attest that robbers in I.V. are getting progressively less skilled as the quarters roll on.

The first attempt I was a victim of happened no more than five days after my roommates and I moved into our first home. The thief was so eager for his prize that he couldn’t even wait until we were out of the house. If only he knew that our roommates who were moving in later were the ones bringing all the valuables—TV, stereo, and the highly-coveted George Foreman grill. At midnight, he tried to take the screen off of the kitchen window. He made such a racket that my roommate, in the most secluded room of the entire house, could hear it.

Then, when he saw a light turn on, he ran into our enclosed backyard instead of down the driveway to the street. He was forced to return past the window, risking a positive identification when we later relayed the account to our trusty I.V. Foot Patrol. He also left a very clear set of fingerprints, although, to this hoodlum’s credit, none were previously on file.

The second time I wasn’t so lucky. I foolishly brought my purse out to a friend’s party, but with my cute outfit I couldn’t possibly manage a place for my phone, sweater, and keys—female readers may empathize.

That night, I left my purse on the couch for all of five minutes while I walked across the street to greet another friend. In that time, my purse was swiped. Let me throw a plea out to future thieves: please check the contents before you put an innocent student through such a hassle. There was no wallet. As I haven’t joined the iPhone cult yet, my cell was a beat-up flip phone that, quite frankly, I might have handed over if asked! The purse itself was fake-looking and slightly stained.

A month later, my purse was recovered from the neighbors’ roof, where the thief chucked it. The phone was still there. So were all my keys. My Access card, with money on it, was still there. The only thing taken was my sweater.
Perhaps the thief was cold that night.

The most recent incident happened over Winter Break (prime time for petty thefts as I.V. turns into a ghost town). My roommates and I returned home to find a back door ajar. At first we thought one of our housemates absent-mindedly left it open, since nothing appeared to be missing.

Two days later, one housemate realized that someone had stolen and cashed $1,200 worth of checks. Three other girls in the house also had checks stolen and cashed. At first glance, this was the most successful burglary of all. But on second thought, I had to ask: who is so unskilled in the art of theft as to write the checks out to his or her real name?

Needless to say, the police caught this amateur within a week of taking our report. He was seen at a Wells Fargo, depositing checks from houses all over Isla Vista.

It’s almost insulting. Did this man really think we wouldn’t notice over a thousand dollars missing from a bank account? Did he think he could get away with robbing us blind? We’re college students, for crying out loud; we need that money for pizza and beer.

As this University gets increasingly more competitive and entering freshmen continue to raise the bar of excellence, it seems the opposite is true for criminals in this town. Next thing you know, we’ll leave the door unlocked but they won’t be able to figure out how to turn the knob.