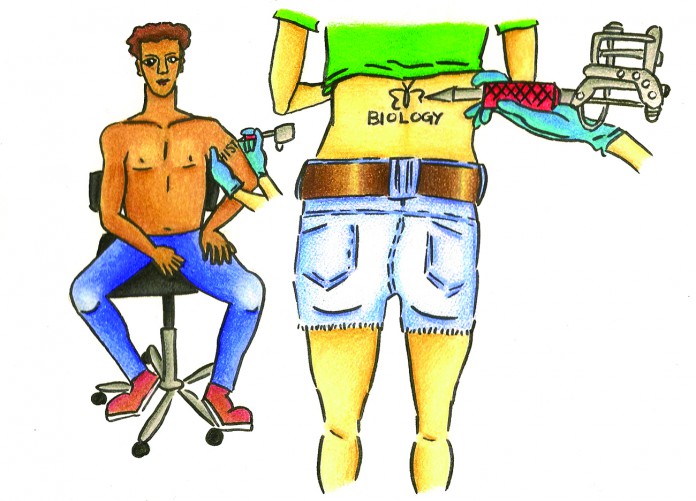 Some students are spending their days at UCSB just going through the motions—going to classes to get through the week and eventually reaching a relaxing weekend. School is an enemy, a stressful burden for them. If this sounds like you, maybe you aren’t taking the right classes.

Some people are pressured into studying a subject by their parents. Others don’t pursue a degree they’re interested in because they think, ‘What can I do with that?’ Some people have passions that aren’t reflected in the available majors at UCSB.

But with some creative thinking, there are ways to get around this issue. For instance, if you are interested in graphic design, you can major in Art and Communication.

People may wonder what you can do with a supposedly “useless” degree, such as Art History or Philosophy, but with some digging around, you can find many careers involving those subjects. Sometimes, majoring in a certain subject as an undergraduate can allow for a more specific degree in graduate school.

Leslie Purdie, a second-year Anthropology and History major at UCSB, dreams of going to graduate school to become a librarian. During high school, Purdue said that she had her heart set on becoming a lawyer, but wasn’t exactly sure why. She wasn’t particularly passionate about it, but thought that it would give her a comfortable salary and some respect.

It wasn’t until Purdue participated in UCSB’s Freshman Summer Start Program in 2009 and heard a librarian come to speak that she changed her mind.

“I had to abandon [what I thought would be a decent career choice] and go with what made me happy,” said Purdue.
After reevaluating her goals, she made lists of what she wanted to get out of her career, which were things like security, happiness, hours, salary, people, and location. In the summer of 2009, she began exploring her interest in libraries more by getting a job at Davidson Library in the Special Collections department, where she is working on reorganizing collections of old, limited edition, or signed works on everything from the civil war to cult awareness.
Purdie believes that a good way to explore your interests is to take classes where you learn “a little about a lot,” such as Anthropology, so that you can pick out specific topics that interest you within the curriculum and explore it further.
Exploring your options is important.

Jemely Dorado, a third-year Sociology major, initially came to UCSB as a Biology major. After taking the challenging introductory classes, however, she realized that she didn’t want that type of stress in her life. She began exploring other options and eventually fell in love with Sociology.

“If I did Biology, I would have had to go to graduate school in that field,” said Dorado. “With Sociology, I have more opportunities and options.”

Career Services is an excellent resource to explore the diverse options available in choosing a major and a career. The Career Center offers two types of assessment tests—the Myers-Briggs test and Strong Interest Inventory. The two tests analyze your personality and provide you with a list of careers and majors that you may enjoy.

Also available at the Career Services Center are “major binders,” which contain general information about each specific major, such as required classes, jobs attainable, salaries for those jobs, and a list of top graduate schools for certain subjects. There is also additional information online at www.career.ucsb.edu.

Rhiann Joshua, a Career Peer Advisor, says that exploring is the best way to decide what would be a good major.
“The important thing about choosing a major and a career is seeing components of your interests and how they can apply to a major,” said Joshua.

Taking a variety of general education and introductory courses can offer insight into many fields and help to pinpoint interests. Another way to have fun and explore possibilities is to get involved in various clubs and organizations on campus.

Don’t simply choose a major because you think that it will make you rich or make people think highly of you. Choose a major by exploring your options and finding what it is that you enjoy.

You might say that you are too far along in your education to change tracks now, but hope is not lost. Just because you major in something doesn’t mean you have to do it for the rest of your life. An undergraduate advisor of mine told me about a Global Studies major who opened a hot dog stand on the Santa Monica pier and is now as happy as a clam.

By being creative about choosing a major or a career and discovering what you love, college and classes can actually be fun and not feel like a chore. Just get out there and explore—you may be surprised by what you can achieve when you’re doing something you love.