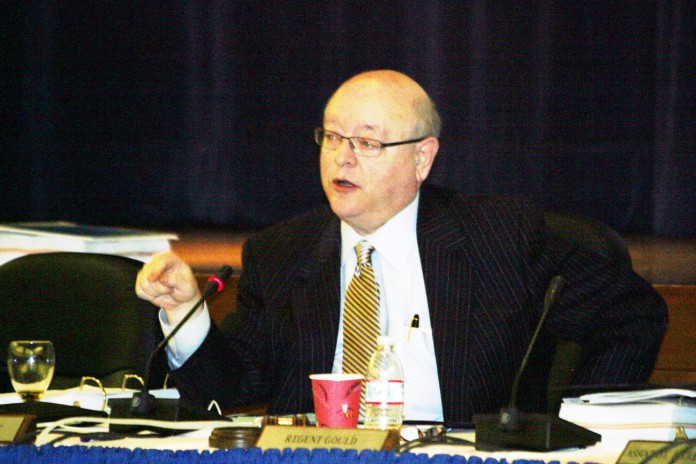 Tensions were high during the public comment period, in which student protesters, advocates and UC employees voiced their frustration and anger towards the current state of UC budget affairs.

Cindy Ramirez, a first-year undergraduate from University of California Santa Cruz, declared that there was more than a 75 percent chance she will have to drop out of school due to the proposed fee increases.

“I got accepted to Brown this past spring, but I chose to go to UC Santa Cruz because I thought it would be more affordable,” said Ramirez. “Now I find out that it’s in fact more expensive and I think that’s wrong.”

Jasmine Hill, the president of the Undergraduate Students Association at UCLA, also described how desperate students were becoming in terms of their living situations due to student fees.

“There has been an increase in shoplifting of food on campus by students, as well as an increase in unit loads for students who are trying to get out of UCLA as quickly as possible,” said Hill.

Regent Russell Gould, who was in charge of leading the UC Regents meeting through its agenda, stated that with the California state budget in a $25.4 billion deficit, funding for the University of California has decreased 40 percent from what it was 20 years ago.

“This is a long trajectory of declining funding,” said Gould. “And although furloughs of UC employees saved the UC system $236 million overall, it is not a long-term solution.”

Gould also acknowledged that even though increasing student fees is the hardest choice the UC Regents have to make, it is a necessary one.

University of California President Mark Yudof addressed the UC Board of Regents by whole-heartedly defending student fee hikes for the 2011-2012 academic year because of their importance in sustaining student financial aid.

“Current benefits have not changed for UC students,” Yudof said. “In fact, the number of UC students admitted with Pell Grants have increased from 31 percent to 39 percent and over half of students attending UC schools come from homes where their primary language is not English.”

Faculty Representative Daniel Simmons, a non-voting member of the UC Board of Regents, stated that Regents had “little choice” but to proceed with student fee hikes.

“I believe it’s unlikely that California can contribute to the UC Budget,” said Simmons. “And UC faculty and staff have been absorbing the costs. Faculty and staff generally support Yudof’s proposal for student fee increases.”

Simmons went on to elaborate on how UC faculty and staff receive numerous lucrative employment offers from other universities around the country and are forced to take them, decreasing the number of faculty retained by the UC system.

One alternative means for generating revenue for the UC system was the increased enrollment of out-of-state and out-of-county students, eventually resulting in a 10 percent cap across all UC campuses.

Provost and Executive Vice President Lawrence Pitts headed the Committee on Educational Policy and stated that non-resident students provided around $100 million in net tuition for the UC system, with the average non-resident paying about $34,000 as opposed to the average UC student paying about $11,000. Pitts also explained how important international students and out-of-state student were in terms of increasing geographic diversity and perspectives on UC campuses.

However, Regent Odessa Johnson questioned whether it was more important to provide geographic diversity to students rather than providing more classrooms and sections for students.

“How do you justify this to the public?” asked Johnson. “It bothers me that we are increasing the number of out-of-state students. How do we justify to our constituents that letting students in from other countries and states who take classroom space from California residents is better for them, for their children?”

Pitts responded with the notion that the University of California is still offering admission to every eligible California student, though it may not be to their first-choice campus.

The last agenda item during open session for the UC Regents on Wednesday, Nov. 17 was the motion to change the title of student fees paid by UC students to tuition. The motion was passed quickly and unanimously by UC Regents.

The motion to vote on the raising of UC student fees will occur on the morning of Thursday, Nov. 18.