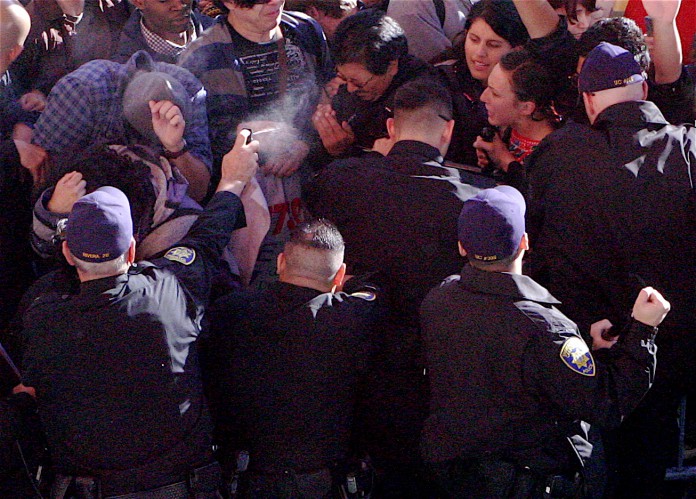 Thirteen protesters were arrested at a protest during the University of California Board of Regents meeting held at UCSF on November 17.

About 300 students from across the state of California attended the demonstration against the potential 8 percent tuition increase proposed by the UC Regents.

Of the 13 arrests, 11 were students; 7 from UC Berkeley and one each from UC Davis, UC Santa Cruz and UC Merced.

According to UCSF Chief of Police Pamela Roskowski, the student arrested from UC Merced was charged with assault with a deadly weapon. Allegedly, the student was able to dislodge an officer’s baton during an attempt to take over the board meeting and to strike the officer in the head with the baton.

The officer responded by drawing his gun to the protesters.

“The officer drew his gun in a defense diligence,” Roskowski said.

Official reports say the officer in question only drew his gun once, however, an eye witness reports he drew his gun twice. Protesters called for the officer to have his “gun taken away” and called for his removal of duty that day. Roskowski said that an investigation will follow, according to police procedures.

As students tried to take over the UC Board of Regents meeting, police used both pepper spray and tear gas to stop the protesters from advancing. However, according to official UCPD reports only pepper spray was used during the protest.

Emily Hallinan of UC Merced administered first aid attention to students who were victims of both pepper spray incidents and tear gas as well as those who were hit with batons. Hallinan is first-aid certified and treated countless students.

“There were a couple [students] who were particularly bad. They were maced, pepper sprayed,” Hallinan said. “I’m here to protest these outrageous fee hikes and take care of people if I can.”

Representatives from University Professional and Technical Employees (UPTE) and American Federation of State, County and Municpal Employees (AFSCME) unions were also present during this protest. UPTE members were concerned with the cut of retirement and retirement health-care options.

Bob Haller, a 27 year employee of UC Berkley, came to the protest in response to these possible benefit cuts.

“UPTE demands fair treatment for our retirees. Their health-care costs are going up, they are cutting benefits for retirees and cutting benefits for future hirees and this is a degradation for all we’ve worked for. We (UPTE) have worked for 30 years for livable wages and to be able to retire with dignity,” said Haller. “UPTE is not asking for lots of money, we’re asking for our retirement pension to keep us current with the rising inflation.”

Students stood in solidarity with the worker unions, chanting, “The students and workers will never be divided!”

“I don’t want us to have more fees. They just raised our fees 32 percent last year and they are trying to raise it another 8 percent.” Vianson said.

As a result, students are experiencing hardships when it comes to their education.

“We are here because we want the Regents to see that we will travel all the way up here to San Francisco, to know that our classes are impacted to the point where we can’t even get into the classes that are necessary for the next quarter,” UCSB student Diane Torres said.

The vote on the tuition increase happens Nov. 18 and students plan to continue their protests tomorrow, bringing more students with them.