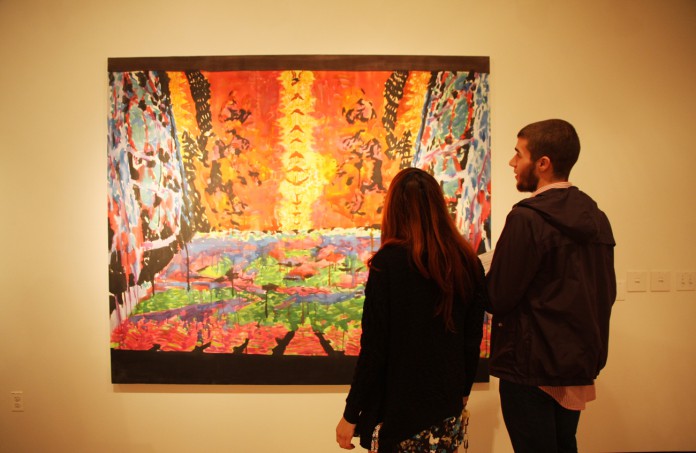 Spatium Sets, a group exhibition in collaboration with Master of Fine Arts (M.F.A.) candidate, Daniela Campins, opened Saturday, November 13 in Gallery 479 and closed November 20th. The show coincided with U.C.S.B’s Interdisciplinary Humanities Center’s ongoing event series, “Geographies of Place”, a series that deals with place as a space whether it be a tangible or a metaphysical state. All of the artists that participated in the exhibition have delved into an exploration of their own relationships to space. The manner in which this idea has been executed can be seen in a variety of media, from sculptures with a painterly quality to paintings with architectural aesthetics. Although not all of the artists had seen each other’s work previously, the unifying concept allowed them to create a cohesive and focused show.

Bessie Kunath a first year M.F.A. student curated the show. Kunath studied at University of San Francisco and California College of the Arts and has worked in various museum and gallery settings.

When asked what about what she enjoys most about working with other artists she said the best part was, “helping them realize what they are working on.”

For this particular show, Campins and Kunath collaborated, using Campins work as foundation to build both the solo and group portions of the show. Kunath contacted some artists she had come to know (either personally or simply through their work) whose work would compliment and build on Campins’ architectural painting style. She chose artists based on their color pallets, technical style, and, most importantly, their conceptual processes. Kunath found artists that have been experimenting with the elasticity of paint as a raw material. For example, one of the exhibiting artists, Rema Gholoum, has taken painting off the canvas and on to “found-object” sculptures. Each artist had his or her own way of dealing with space and the way paint could be used to interact with and create a space.

The idea of perceptual space is the driving idea behind Daniela Campins most recent body of work.

In my interview with Campins I learned that she takes inspiration from a variety of sources Russian constructivism and architecture to Op art to images from her home country, Venezuela. For some time Campins has been interested in the idea of painting intuitively. For her this means, if she were to create one aspect of a painting, a conscious or subconscious intuition would lead her to the next step in the painting process. This cyclical painting style allows her to connect with her past, future and subconscious present.

Her painting entitled “Punto Fijo” illustrates the goals Campins wished to achieve with this show, while also acting as a window into what the future holds for this body of work. Campins began this piece while attending school at California State University Long Beach, but abandoned it at the time. She began working on it again with the concept of stage-like, shallow figure-ground relationships in mind. To achieve this tension between “representation and figuration” she masked off sections of the painting and played with the temperatures of the colors. What resulted is a flat sky blue plane that cuts across a warmer, deeper, more figurative background. At this point Campins felt that the painting had become too aesthetically beautiful; she had just come by this new type of oil-based paint that she wished to implement in this painting. Rather than using a brush as she had with the rest of the painting, Campins spread the paint on to the canvas with a piece of cardboard. This element gives the painting a choppy and almost unfinished feel, exactly what Campins hoped for.

“I like [my paintings] to feel unfinished,” Campins says, “when they are finished, I feel like their possibilities have been exhausted”.

The concept of space is multi-faceted. It can be interpreted literally or virtually, physically or emotionally, through a variety of medias both on 2-demensional and3-dimensional planes. Those who attended the show enjoyed the chance to see the work of many different artists.

Spatium Sets highlights a group of talented artists that individually and collaboratively bring their own spatial relationships to life through their work. Even though this a specific art show is over the IHC will continue with its series throughout the year, remember that gallery 479 is not just a red building that looks like a barn, it is home to student artists who collaborate together to create not just art, but an experience.

Art to Zoo: A Collection of Pictures Worth A Thousand Roars