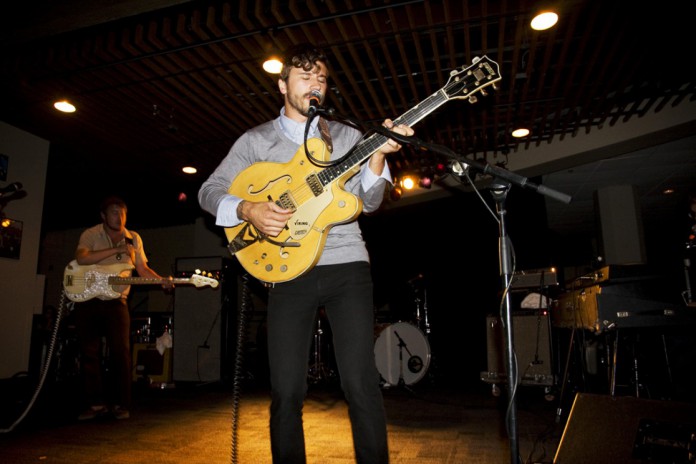 In the past, The Hub has had some big names like Beck take the stage. But on Monday, November 1, The Hub opted to kick off the unofficial end of midterm season by hosting a musical event headlined by the experimental music group Portugal. The Man.

The Hub is the perfect setting for a musical performance. It has great acoustics and an overall feel that is eerily similar to the Saturday Night Live musical performance stage: simple and classy. Having the stage positioned in one corner of the Hub funnels the audience in toward the band. This, combined with a low ceiling, creates an ideal live atmosphere that rivals your best friend’s basement in being able to provide a more intimate kind of performance. This level of live music entertainment, at a mere $21 admission charge, is all conveniently offered on campus.

Portugal. The Man. may not be as well known as past performers, but the show was a hit nonetheless.

“The band was great, totally original, and the indoor venue made it a lot more intimate,” UCSB sophomore Dianna Kniazewycz said.

What can be said about Portugal. The Man.? For starters, they’ve got a name unlike any you’ve ever heard, and, luckily, a sound to match it. Imagine if Jack White actually took the time to learn how to sing and play the guitar, then called up the guys from Radiohead and The Mars Volta to set up an experiment resulting in an ultra-dynamic, strangely melodious, clash of musical genres with a life of its own. Their resulting bastard child would be Portugal. The Man.

When asked about how they developed their unique sound, bassist Zach Carothers explained how growing up in Alaska gave the guys exposure to many different styles of music: everything from Blue Grass to 80’s Metal, then later Indie music. Their newest album, American Ghetto, has a kind of Progressive Rock feel with a pervading dark, haunting tone. According to Carothers, this is intentional.

“Yes, [the new album has] more of a darker sound so we wanted this one to be more mean. [It’s] nice to change themes,” Carothers said.

At times during the performance, you could get lost in long instrumental tangents with elements of psychedelic rock, Spanish guitar solos, and electric keyboard parts that leave you unsure ofhow to describe them to your friends when you get home. Somehow “trippy” doesn’t do them justice.

The band’s willingness to experiment beyond popular norms is commendable, and Carothers insists that their rising popularity hasn’t lead to any pressure to conform to industry standards.

The Hub performance marked the end of Portugal. The Man.’s current tour, but the band members assured they would be back at it soon.

When asked about life on the road, keyboardist Ryan Neighbors said, “[The most important thing is] doing what you got to do to stay sane. We encourage tooth-brushing and showering. We got to learn a lot about people [and] places. I learned to not drink beer on the streets.”

Bassist Michael Million said that the band would also be playing on Saturday, Nov 6 at New Noise Festival, so if you attended that show, chances are you saw them there.

There wasn’t much bad to be said about Monday’s show, except that it would’ve been fun to see more enthusiasm from the crowd.

But as one insightful crowd member, UCSB freshman Andy Brooks, said, “I think as their average intelligence goes up, a crowd’s craziness goes down. We aren’t at Ozzfest, these kids have brains.”

True that. But be sure to check out future shows in The Hub. On Friday, November 12 Neon Trees will be performing, and OK GO will take the stage on Friday, November 19. Show times and ticket prices change for each show and are available on The Hub’s webpage.