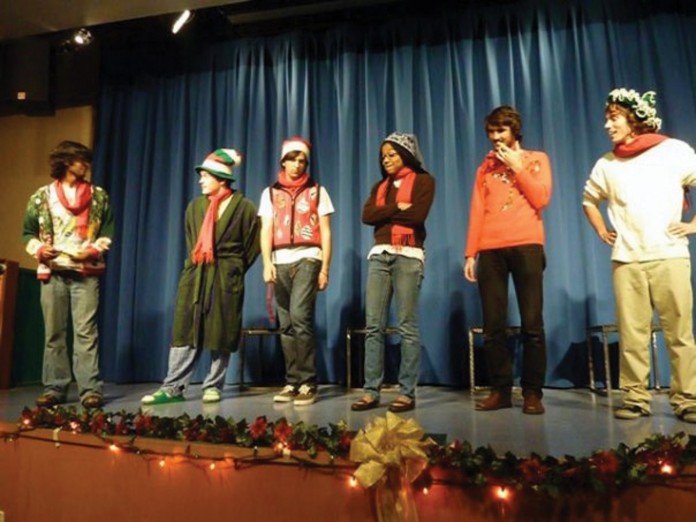 If you’ve ever watched an episode of “Whose Line Is It, Anyway?” then you’ve got the basic idea of what to expect from Improvability: a mixture of games and imaginary situations from which a flurry of spontaneous hilarity emerges. Thanks to quick wit and a little teamwork, the group puts on a great performance that leaves you wondering, “How the heck are they so hilarious on the spot?”

What is Improvability?  It is a group of highly talented young persons who, with help from IV Live, provide improvisational comedy to the Isla Vista area every Friday night in Embarcadero Hall at 8PM.

It turns out that the secrets to improvisational comedy are pretty simple: hard work, practice, and the ability to work well with others.

“The biggest thing is teamwork. In Improvability we all work hard to expand on each other’s ideas and create a much more pan-dimensional tapestry than any of us could make alone,” said Improvability member Michael Loginov.

There were times when the level of team chemistry displayed on stage made me wonder if the performers could read each other’s minds. But are the shows really entirely improvised?

Actually, before a show, the performers do go through a kind of “rehearsal” of all of the games and sketches, and they discuss what works and doesn’t work. Don’t get the wrong idea; this preparation isn’t an actual rehearsal. Instead, it’s more like a pow-wow that covers the basic fundamentals and ensures that all of the performers are on the same page

An improvised comedy team performing its routine is similar to a jazz quartet performing a standard song for the thousandth time. Every session has the same basic chord structure and foundation, but the improvised solos radically define each performance, making them unique.

“It really is all completely made up in our heads,” said Improvability performer Dillon Kent-Yuhasz. “Everything you see at our shows is completely new stuff that has never been seen before.”

On Friday, October 22, nothing kept the performers on their toes more than the audience, who played a major role in determining the themes for games and provided a wildcard quality. In one instance, an audience member shouted out a controversial topic suggestion. After some deliberation, eager-to-please actors finally settled the matter when one performer declared, “Give the people what they want: dead dogs and lesbians!”

If you’re interested in joining Improvability, auditions are generally held at the beginning of each quarter. Don’t be afraid to try out your improv skills!

“An improviser has to be okay with failing and looking stupid,” said Loginov.  “If an improviser is too scared to fail, [he or she will] be too afraid to be hilarious on stage.”

IV Live also offers a two-unit theater course, listed in the course catalogue as THTR 42 for lower division and THTR 142 for upper division. The two courses are actually combined into one class that provides a production staff to put on performances in IV. Although the course is graded, IV Live Production staff member Lily Sepaphur insists it’s a fun atmosphere that rarely feels like a class at all.

“It’s definitely more than a class. It’s more like a club,” Sepaphur said. “We all help each other out with everything that needs to be done for the show and you don’t have to be a theater major or anything.”

In addition to their usual Friday shows, Improvability will also be performing in a competition at the Chicago Improv Festival this November.

Tickets for Friday shows are three dollars for students and five dollars for everyone else. Season tickets are also available and come with a t-shirt. So if you’re looking for an inexpensive way to have a little fun and distract your overworked brain, the show these guys put on delivers a laugh-a-minute.

Don’t miss other performances that IV Live helps to put on, such as Shakespeare in the Park. More information is available at their website, www.islavista-arts.org.