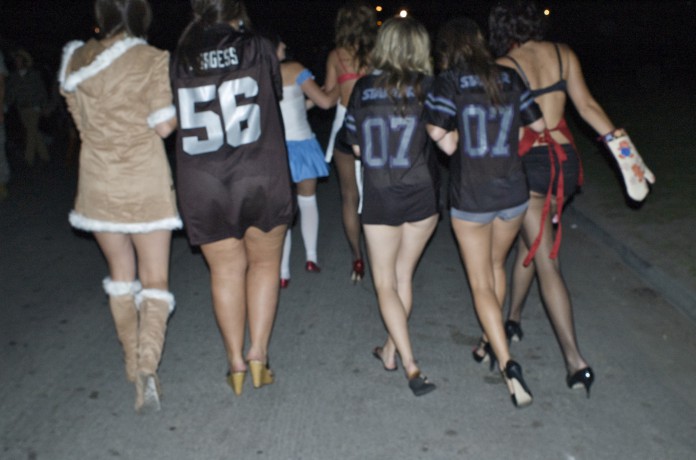 There is no denying that Halloween in Isla Vista has long surpassed the realm of “locals-only” and has become an event on a much larger scale that attracts visitors from far and wide. Given that the increasing publicity of Halloween adds to the hype and excitement of the holiday, it also poses greater safety risks for UCSB students – namely young women.

The rock-on, party-forever image that is associated with our beloved I.V. gives participants more than enough reasons to dive into the party scene and get their fair share of fun during the night’s festivities. In this state of mind, it is easy for harmless fun to escalate into potentially dangerous situations, especially for females.

One catalyst, as stated by Melanie Matson, Director of Rape Prevention Education Program, is presented when “catcalling sets a new social norm for others to follow when people see it happening, but do not step in to stop it.”

So, where do we stand as a community on the issue of female sexual harassment during Halloween? Who takes responsibility so we don’t have a recipe for toil and trouble bubbling before the end of the night?

Guerbaoui also said that sexual harassment can take place in different forms and can be a result of one or more actions.  But the best way to fight harassment is for students to look out for each other.

“Students must make an active effort to look out for the group they are with,” he said.

It is more likely that a worst-case-scenario situation will arise if a student gets separated from her group. To ensure that these situations do not occur, Lieutenant Ray Vuillemainroy, Station Commander of IV Foot Patrol, is working around the clock with his staff to put together the operations for Halloween.

“Halloween is an event we take very seriously; we have officers from outside the county coming in, and over 150 deputy officers will be stationed on the streets in I.V. on Friday and Saturday night, including undercover policemen,” said Vuillemainroy. “These policemen are especially trained for mob and crowd control.”

The additions to IVFP will aid in the attempt to regulate the chaos that takes place on Trigo, Sabado Tarde, and Del Playa.

So now the issue rests in the hands of the Isla Vista residents. Female sexual harassment affects our student body, so what do we do as a community to stop it? The police are doing their part, but it is also imperative “that the community as a whole is more proactive in stepping up and resolving this issue,” Matson said.

It is up to I.V. residents to set the standard of what is considered proper and improper behavior to out-of-town visitors.

Due to the very nature of Halloween in Isla Vista, it is also up to the ladies to be alert and aware of their surroundings.  Awareness is key, but this does not mean that dressing provocatively is an invitation for unwanted sexual contact.

The problems that arise during Halloween can very well be contained if party-goers, both ladies and gentlemen alike, take responsibility for their actions, while still managing to have a great time.