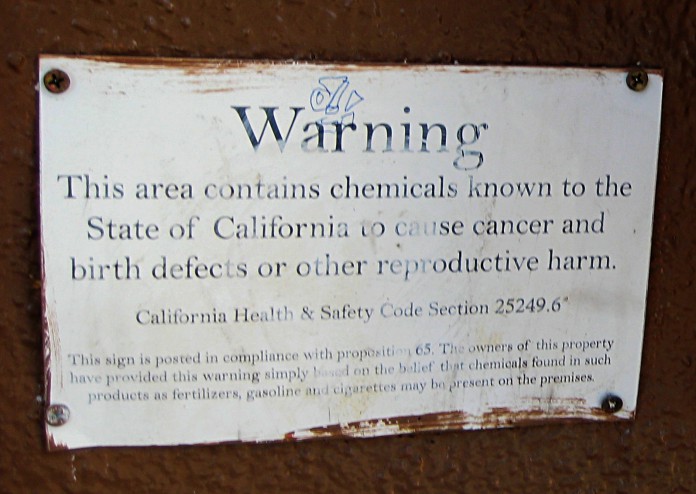 Asbestos, a material used in several older buildings, can be considered a buzzword for danger. The building material’s well-documented health risks and strict Environmental Protection Agency regulation are a sufficient cause for concern.

Asbestos’ main health hazard is its designation as a carcinogen, as the asbestos fibers found in building materials may dislodge and become airborne. Once airborne, the fibers can be inhaled and become lodged in the lungs and increase the risk of lung diseases such as lung cancer, mesothelioma (a rare form of cancer linked to exposure to asbestos), and asbestosis (a progressive, long-term noncancerous lung disease where lung tissue is scarred by the asbestos fibers, blocking blood flow and causing other health complications).
A large source of the panic (and lawsuits) originated from the fact that asbestos is found in many commonly-used buildings where people spend much of their time, such as apartments, office buildings, and indeed, several buildings on UCSB property. While there is no explicit asbestos ban in the US, there are many usage regulations from the EPA.
The fact that you are putting yourself at risk for asbestos exposure during that 8 AM lecture may make it even more enticing to hit that snooze button and catch a few more Z’s. Although the health risks are potentially life threatening , the actual chance of inhaling asbestos fibers, even in buildings that contain asbestos, is very low.
Asbestos contained in building materials are normally combined with other materials. These materials are often strong bonding agents, such as concrete, that hold the fibers in place. “The buildings at UCSB that contain asbestos are indeed bound with other agents to ensure that the fibers do not come loose”, according to Gene Horstin, the Asbestos & Lead Clerk of the Works who works with UCSB Design & Construction Services.
“We’re wary of the dangers that asbestos poses, but the truth is, you run a risk every time you enter any building,” Horstin said.

“There could be electrical and wiring hazards, or structural defects that are not immediately known to the student,” he said. “The asbestos is documented in detail, and we do take periodic air samples to ensure the air is free of asbestos particles, since that’s the only way they can harm you.”

Horstin is very knowledgeable about the asbestos situation, having detailed the aggressive steps taken to minimize asbestos risk after a lawsuit in 1979 from a woman diagnosed with mesothelioma. She worked in the library and claimed that she was exposed to asbestos particles during a renovation, which had caused her mesothelioma.
“Many of the dorms were gutted and filled with new material that didn’t contain asbestos,” he said.

“San Nic and San Miguel were targeted a second time for asbestos removal in 2007; I’d estimate the buildings are around 99 percent asbestos free now. You can never get it exactly 100 percent, but we try to get it as close.

as possible. Anacapa, Santa Cruz, and Santa Rosa were all done in the 90’s. FT was gutted right when the university bought it,” according to Horstin.
“So as you can see, the dorms are much safer than some of the apartments in IV, which are older and have not been touched since the 50’s or 60’s. This is why some students renting apartments have received pamphlets on asbestos while dorm residents have not.”

Horstin advises students to not overreact about the risk that asbestos may pose to their overall health.

“If anything, we’re the ones who are at a higher risk,” he said, referring to the workers who deal with asbestos on a daily basis.
“We’re constantly handling it, taking samples, and when we undergo abatement [asbestos removal], we definitely agitate the asbestos. However, the contractors and supervisors we hire have all taken OSHA-approved classes to increase awareness and learn how to handle the situation, so we’re well equipped to deal with the situation.”
Horstin elaborated on why students’ risks are lower than that of campus workers’.
“The students’ risk is minimized since they spend so little time in these areas and for much of it, the building is stationery and there is no agitation of asbestos materials. Also, all of the newer buildings on campus are completely asbestos-free.”
Horstin emphasizes the maintenance work he frequently undertakes with his team, the UCSB Lead and Asbestos Program. They work closely with UCSB Environmental Health & Safety to frequently take not only air samples, but building material and paint samples to document asbestos and lead levels. They send the samples to an EPA-accredited lab for analysis and base their work orders on the results. Unfortunately, much of the actual work must be carried out during periods where the campus is largely empty, meaning either winter or Thanksgiving break.
If you think you’ve got it bad with an 8 AM and a risk of asbestos, try putting yourself in the shoes of UCSB’s Lead and Asbestos Program, spending your winter break with asbestos and lead. Not so bad, is it?