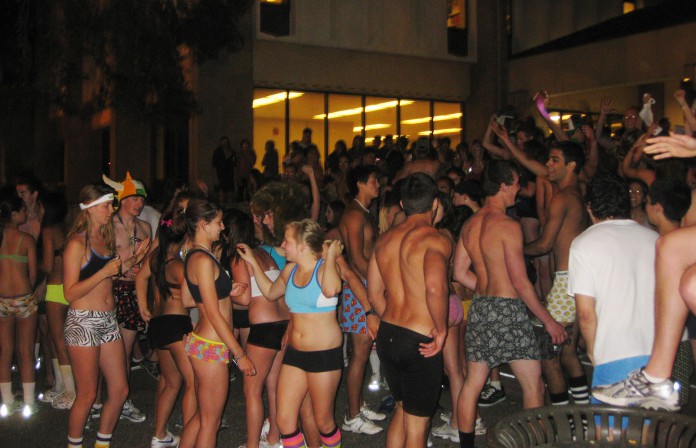 UCSB and it’s neighboring community, Isla Vista has long standing traditions.  Some friendly, some less than so.  Traditions that are featured as part as the Gaucho lifestyle offer opportunities that creates the unique UCSB experience outside of the classroom. However, not all of these traditions (or yearning to be) traditions last.  Fight Night is no longer recurring since the hate crime initiated by a no-longer fraternity, PIKE, as well as Floatopia, after its environmental devastation on the Del Playa beaches back in ‘09.

Extravaganza: A free music festival offered by Associated Students during Spring quarter.  Extravaganza has featured artists such as Drake, Ludacris,  Sublime, Run-DMC, and Jack Johnson, just to name a few.  An all day event, Extravaganza is a free event in which security is tight, and non UCSB students are abundant.  However, this past year, Extravaganza experienced some security problems as the line outside began to riot and students were trampled.  Despite the havoc, Extravaganza continued to be successful. Expect even more security this coming year and more restrictions.

Water Ballooning: As an incoming freshman walking down on the highly anticipated Del Playa is something that most of us have looked forward to.  However, water-ballooning freshmen is something not uncommon.  This is one of the nastiest traditions of Isla Vista, as older students take prey on the large groups of freshmen, talking rather loud and “Whoooing” even louder.  Here’s a tip, for the first couple of weekends venturing out onto Del Playa, don’t be in groups larger than three.  Large groups of students are an immediate signal of freshmen.  Good luck and stay dry.

Undie Run: Every quarter during finals week there is an undie run.  This is a mass explosion of underwear clad students who want to blow off finals stress with a half naked run.  The run starts at Davidson Library, heads down the Pardall bike path, through Isla Vista, down Del Playa and finishes back at the Library. Many students choose to run through the Library 20 minutes (or so) before closing.  We suggest doing it during Spring quarter and staying away from Winter quarter because the nipping and numbing cold during winter quarter can be a little unbearable.

Halloween: Many students state that Halloween is what Isla Vista is known for.  Described by fourth year Psychology major Brian Nguyen as “insanity,” he stated that, “it’s the out of towners that make Halloween so crazy.  They don’t know the IV unwritten rules and end up getting arrested.”  As the craziest week in Isla Vista, Halloween is celebrated for the entirety of the week.  Cops are brought in from all UC campuses, fences are placed around all dormitories, and out of town guests for dorm dwellers are strictly prohibited.  There is a movement on campus where many students feel that IV would be a much safer and fun experience if it was kept strictly local and many blame the insane mishaps on the out- of-towners who do not understand the unique atmosphere of Isla Vista.  For this tradition, prepare to have a minimum of three halloween costumes and say goodbye to your liver.

Freebirds at 2am: Many students throughout the weekend find themselves one way or another standing in the outlandish line in front of Freebirds.  It’s not an uncommon activity for many an Isla Vista night goer. If you aren’t careful, you can find that the hefty prices at Freebirds during those party nights will begin to lighten their wallets.  “Even though its prices are crazy expensive, it’s totally worth it when you’re starving and intoxicated.  Money doesn’t matter when you’re drunk.  It’s awesome, the atmosphere is great, you’re bound to run into one or two people you know,” Terry Li, a second year English student states.  This is a staple of Isla Vista night going and through experience I have found sharing nachos with four friends is much cheaper then everyone getting their own burrito.

IV Loop: For those who turn 21, the “IV LOOP” is a common weekday experience.  Usually starting at mid day, students share a pitcher of beer at all the places around Embarcadero Loop that serve alcohol.  This is usually done throughout the entire day, when students choose either to finish at Freebirds or Giovannis, depending on the groups choice of atmosphere.  This is an experience and long standing tradition in which many Gaucho’s will most likely venture under once reaching the fruitful age of 21.

Other up and coming traditions are the Pride Festival, brought on by AS Queer Commission and other queer groups on campus, and Streettopia, in which a day party occurs on the street of DP when the beach closes.  If none of these activities seem to suit your fancy, there are plenty of other activities on campus to engage in that are beyond the typical Isla Vista drinking traditions.  The Multi Cultural Center holds various events to rise consciousness of diversity issues on campus, and to bring fantastic cultural performances, most of which are free, to UCSB campus.  Arts and Lectures also puts on various performances some free during the year, and most offered at a minimal cost on campus.  There is plenty to do on the UCSB campus and its surrounding community, so much so that you’ll  find your planner overlapped.

Enjoy your time here and create your own Gaucho traditions!