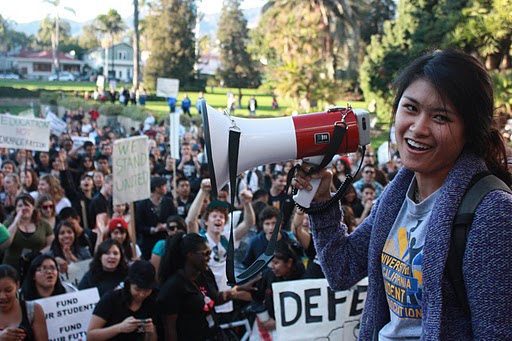 
“This is UC-wide, it’s state-wide, it’s all sectors of public education throughout the state and the nation,” said Armando Carmona, third-year student and one of the protest coordinators. “Today is a historic moment when society comes together and demonstrates support of public education.”

The procession was massive, extending the width of the street and about a city block long. Students with megaphones rallied the crowd with catchy chants that made you involuntarily bounce along. Signs were handed to all who originally joined the protest, but more and more people joined as the crowd moved, caught in the momentum of the protestor’s enthusiasm.

Police officers cleared the way for the march, placing a motorcade between the marchers and oncoming traffic. In their wake the protestors formed behind the line of their banners, massing together on the street and overflowing onto the sidewalks. The crowd screamed for those off to the side watching the protest to stop filming with their camera phones and join the march. Some actually did. One older woman simply plugged her ears and waited for the noisy group to pass.

“There are a lot of issues out there right now and education seems to get lost in the shuffle,” said San Diego resident Michelle Hoffee. “Seeing this [march] makes me interested in this problem, I’ll probably go home and research it.” Hoffee, a visitor to Santa Barbara, was impressed by the protest, and was happy that unlike some countries, Americans have the freedom of speech. “I’m proud that we can do this,” Hoffee said.


Overall the community showed signs of solidarity for the marchers, who gathered to protest the cuts to all levels of education and demand a change. The UCSB Coalition, an organization of students, faculty and workers dedicated to fighting the budget cuts, and the Santa Barbara Teachers Association (SBTA) teamed up to organize the march downtown. The SBTA arranged the proper permits which allowed the march to occur, as the mass of students, educators, workers and community members moved up and down State Street, ending at the Santa Barbara Courthouse.

“This is a community problem, we’re a community solution,” said former mayor Marty Blum in her address to the crowd. “We’re tired of paying for this governor’s broken promises.”

Even young members of the community were out in force. Children joined their parents and teachers in the march, giving a face to the education situation. Some children were pulled along in a wagon, while others proudly toted their own signs. On child’s homemade sign read, “My school is a good place; please keep it a good place.”

Teachers are a key component to keeping the schools a “good place”, and the SBTA has been forced to handle their share of problems for the past four years, mainly in the form of furloughs and layoffs. “I had a teacher yesterday who got his RIF (Reduction In Force) notice on the day his daughter was suppose to be born,” said Layne Wheeler, President of SBTA and California Teachers Association representative. “It’s demoralizing.” With $20 million dollars cut from the budget in the past two years class sizes have increased and programs have been cut, affecting the children those programs are meant to educate. â”We need to have a steady stream of income to education to fund it properly and make us a world class institution again,” Wheeler said. “Being 47th nationally, when it comes to educational funding, is not the place that California needs to be.”

The CTA is taking action by encouraging those who are able to vote to sign a petition to repeal corporate tax breaks and start using the taxes to fund education. In order to get the petition added to the June ballot, Wheeler suggested that voters should call their legislators and let the legislators know how unsatisfied they are with the current state of education.

Teachers are not the only ones struggling to make ends meet. Students have found paying for college increasingly difficult over the past few years.

“A lot of us come from low-income families and what’s happening now is a lot of us are dropping out of school because can’t afford to pay for college anymore,” Bouldin said. “We worked so hard through high school just to get here. Now that we’re here they raise our fees and even though we’re capable of doing it mentally, we’re not able to stay in here because we’re financially unstable. That’s a problem.”

The UC Board of Regents and President Yudof originally advertised the Blue and Gold Opportunity Plan as a system to keep low-income students from missing out on an education. However, this plan requires that students apply for all forms of FAFSA and Cal Grants before covering any student fees. “I some issues with it because it excludes middle income students that don’t receive financial aid and also AB540 students who don’t receive any financial aid,” Carmona said. “It’s helping a few more students, but it’s just a band-aid on something that needs surgery.”

Das Williams, Santa Barbara City Councilmember, is a long time resident of Santa Barbara, who attended Santa Barbara City College for two years before transferring to UC Berkeley. Williams knows the value of public education, and is centering his campaign for state assembly on this issue. He plans to send his canvassers into the community to help raise awareness and get the teacher’s initiatives on the ballot. Serving on the council, Williams says that they try to insulate the classroom from the cuts as much as possible, trying to retain the teachers and instructional aides.

According to Williams, the path we are currently on is leading us towards privatization of education.

“We need to be angry,” Williams said. “We need to let politicians know that it’s unacceptable to approve additional education cuts and that we will take action if they do.”