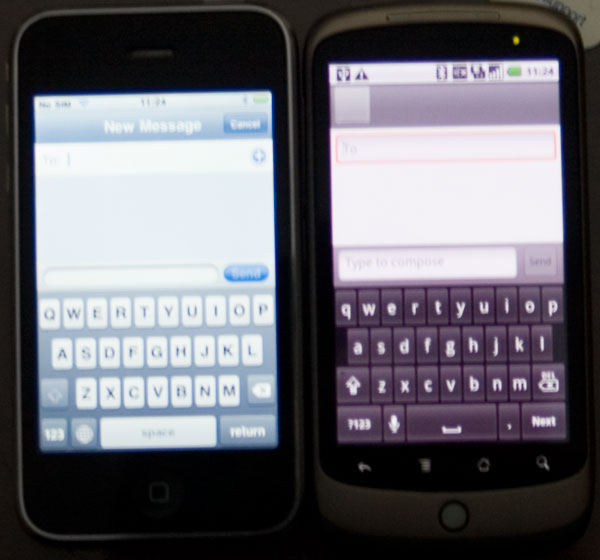 It is well known that the iPhone has enjoyed great success in mobile devices. Its adoption curve alone has become history in the making. What may come as a small surprise is that another technology giant has released an iPhone contender, Google’s Nexus One. The two devices are vastly different in hardware, operating system, and philosophy, but the bottom line in this showdown is personal preference.

Since its debut, the Nexus One has fought an uphill battle for a stake in the mobile market, but has a growing fan base that has become, like many of Google’s products, their own advertisements. Google has released a mobile device to mediocre success in the past, [insert a brief chuckle from those of you who remember T-Mobile’s G1] but has never designed and distributed its own mobile device before the Nexus One. The phone is based on Google’s popular mobile operating system (OS), Android, which is now in its 2.1 build, dubbed Eclair. Android’s current claim to fame is being a fast and stable open source OS that welcomes basic users and developers alike. This begs the question:

What is Open Source?
And more importantly, what does it mean to the consumer? Open source is a methodology of production, commonly in software, in which all of the building blocks of that product are available for all to see. In software, this is done by making the source code, the basic programming language that makes a piece of software run the way it is meant to, open to everyone, hence Open Source. What this means to the consumer is that there are less roadblocks for developers to get through in order to build an application (app) for an open source OS. In short, people can make apps easily.

The first comparison is the first place the consumer sees: the screen. The iPhone has been sporting a gorgeous 3.5 inch (diagonally) Liquid Crystal Display (LCD) screen for three years now, complete with 320×480 resolution, multi-touch, and fingerprint resistance.

The Nexus One bumped up to a 3.7 inch screen that uses a new technology called Active Matrix Organic Light Emitting Diode (AMOLED). This technology provides ultra thin high resolution screens that have shown drastically better contrast than current LCD technology. This is bolstered in many ways by the lack of a need for a backlight, which has always hindered LCD technology. The Nexus One’s screen reflects this, with 480×800 resolution and a contrast ratio of 100,000 to 1, vastly surpassing the iPhone in specifications and reviews. Despite this holy grail of mobile screen technology, AMOLEDs are still fairly unproven, and early adopters could benefit or suffer due to this.

Next to be compared is the down and dirty hardware guts: the processor and memory. The iPhone 3GS’ processor is a great update from previous iPhones, a 600 MHz Samsung A8 processor paired with its own graphics processor (Wired report).

The Nexus One is again trying out a brand new technology, Qualcomm’s 1 GHz “Snapdragon” processor. While on paper the Nexus One’s Snapdragon widely outclasses the iPhone’s A8, the lower power on the graphics end gives the iPhone a strong leg up in some 3D applications, according to Ars Technica. It is important to note that the iPhone will not have the advantage in all 3D applications, and will not outperform the Nexus One in displaying high resolution video.

Along with speedy performance, storage options should also be examined. The iPhone 3GS comes in either 16 or 32 GB flavors, and has no options for memory expansion beyond what is (amply) provided. The Nexus One offers only a half GB of internal storage, but comes standard with a 4GB storage card. This card can be swapped for any compatible storage card, and the Nexus One can handle up to a 32 GB micro-SD card.

The last bit of hardware to compare is the external bits and bobs, such as the camera and interface. The comparison of cameras is reasonably straightforward, as the name of the game nowadays is megapixels (MP). The iPhone 3GS sports a 3 MP camera while the Nexus One clocks in with a 5 MP camera with flash. The winner here is fairly evident, but that is not the case when it comes to interface.

The iPhone interface is a mobile classic: it comes down to a giant screen and one button. Apple puts all of its interface choices into on screen buttons, for better or worse. The Nexus One doesn’t completely depart, but has four buttons below the screen as well as an integrated trackball, similar to the ones used in Blackberries. These design choices tie in integrally to the OS and completely change how a person can interact with the given product.

As discussed earlier, the Nexus One’s software base is the Android OS. The iPhone runs a proprietary OS from Apple that is as easy to use as it is well known. The contest between the two OSs is very much personal preference and really comes down to the philosophy behind the mobile device. This is where the two devices completely separate, taking integrally different approaches to human interaction.

The iPhone has long prided itself on a fantastically simple and easy to use interface with an emphasis on on-screen buttons and as few menus as possible. It also has a vast app store that is constantly screened and updated by Apple, providing the best possible resources for its users. Apple’s stringent requirements, while keeping an unprecedented standard of user interaction, limit the availability of certain applications. The iPhone’s approach also limits the amount of customization available to its users, in order to keep the interface sleek and clean.

Android’s approach is almost completely opposite to this. Because it is open source, information on the Android OS is available from the very basic code to development kits and testing systems. While a goal of Android is to be easy to use, its very core allows infinite customization and a wide range of widgets and apps. These OS and interface comparisons are reinforced with some great graphics in a comparison done by Phone Arena.

Of course, even after all of the poking and prodding, a huge underlying issue is wireless carriers. The iPhone is exclusively AT&T’s, so if you love Verizon, look elsewhere. The Nexus One is sold through Google directly, available with a T-Mobile plan, unlocked, and soon a Verizon version in Spring 2010 according to Google’s distribution site.

This again reflects the Nexus One’s “Open” philosophy, allowing the consumer to choose from a range of carriers, or get an unlocked phone directly from the source and use it with the wireless carrier of your choice. Currently, the unlocked option would mostly be useful for AT&T enthusiasts that don’t want an iPhone (there is no AT&T 3G support as of yet though rumors place it coming soon). While carriers are often a restricting reality, they are necessary for any real functionality, and must be heavily considered in the mobile device decision process.

When it comes to the final round, the key differences in these devices are their backing philosophies. These are what differentiate the phones and the types of people that are die-hard fans of either one. In those core philosophies, the user’s preference and style become the end-all-be-all of the showdown, and that is where the final decision comes to rest on the consumer’s head.

If you are the kind of person who just wants everything to work the first time you touch it and control and customization are not at the top of your list, you probably already have an iPhone, or you should get to the AT&T store in Camino Real Marketplace and try one out immediately. It is the Gold Standard for a good reason, and its unprecedented levels of speed, ease of use, connectivity, and life-changing-ness are undeniable.

If you instead don’t mind tweaking things to be perfect for you, but have a personal need to customize and control your mobile devices until they suit your (very picky) needs perfectly, then the Nexus One is the answer. Another option is that you are a budding coder, and would like a platform that you can work with easily and a technical community that never sleeps and always has answers. If this is you, then perhaps the Open Source Underdog, with its cutting edge technology, infinite personalization, and constantly adapting software may be just the thing.