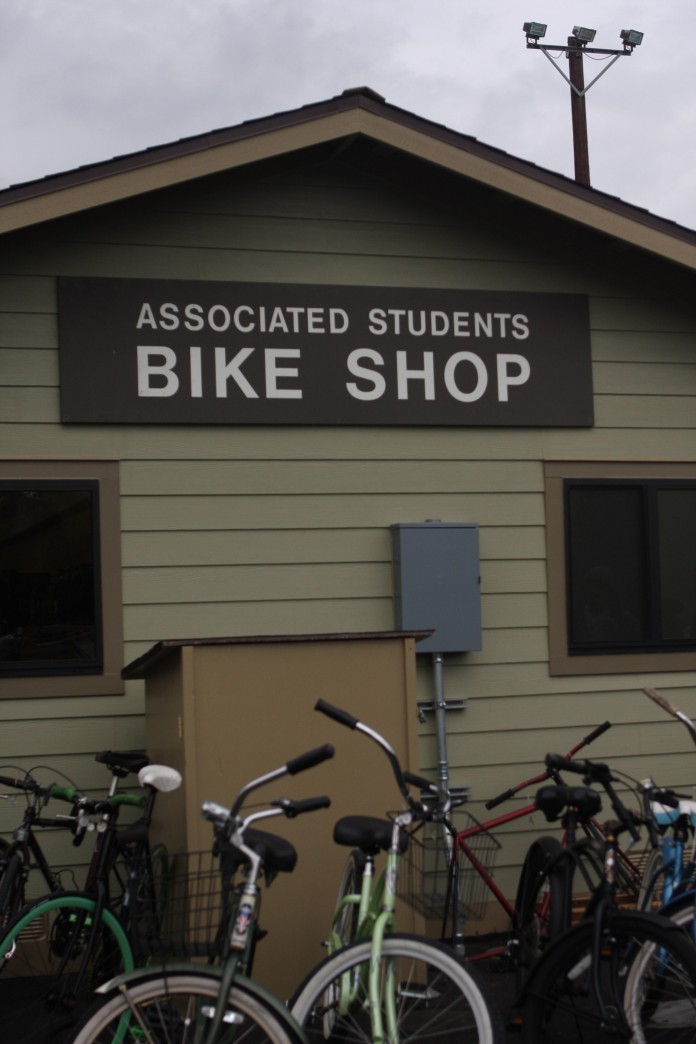 UCSB is known for its sunny days, warm climate, and tons of bicyclists all around campus. The Grand Reopening of the AS Bike Shop on campus was held on Friday, February 19. Although the weather was less than the cliched picture-perfect Santa Barbara we all know and love, there were still dozens of people present to see the new shop, take part in the CSO Silent Auction, and munch on free pizza and soda provided by AS.

(All Photos taken by Eddie Ferry)

The event was to showcase the fact that the bike shop was leaving the temporary location it held for about seven months across from South Hall and was returning to its original spot between the back end of HSSB and the Campus Pool. The new building in its original location had undergone construction, resulting in much improvement over the past few months.

According to David Salmon, the bike shop coordinator, the place definitely needed some changes. â€œThe old space had rotten floors, mold, sometimes leaked, and had low ceilings.â€ Previously, the bike shop had been run out of a combination of two trailers, dating back to many years ago. “Our new shop is very professional, and neat for now. It has a high ceiling, skylights, even a bathroom!” he raved.

Third year History major Jesse Kurrasch, a long-time bike shop employee, not only loves his job but also really likes the new place. “It’s spacious, and the new interior really makes the place feel much roomier,” he claimed. “Also, we’re nicely organized in the back, which should make rushes easier.” Kurrasch is a bike mechanic, but no concise job description can be given for all that he and other employees do. “At the bike shop everyone helps out,” he explained. The employees know that student funds cover the shop, and feel that it’s good to give back. They try to do as much work as they possibly can to help out the students.

The bike shop is a part of AS, and is funded by them as well. “We hire only undergrad employees. We like to recycle the money back to the students,” said Salmon. “Our goal is to offer convenient, inexpensive services to students on campus, keeping them both safe and well-served, as well as educating them on maintenance to maintain student safety. “For example, a large emphasis is placed on simple upkeep, like keeping tires properly filled with air and chains oiled–these small things can make a huge impact on safety. Their prices are competitive, but not so much so as to undercut surrounding businesses. “We don’t advertise much. People know us because we’re a great place for convenient service,” said Salmon.

The event itself culminated in a CSO silent auction sponsored by AS BIKES. Michell Cao, the program coordinator, explained that the CSO was auctioning off impounded bikes. The CSO impound lot was full, and instead of auctioning the bikes off online as is ordinarily done, they decided to put on an auction at the same time as the opening event. “This way, the school gets to keep all the profit,â€ she stated. “It’s going to improve the bike system on campus.” The auction lasted for two hours. Each previously impounded bicycle began at $30, and bids were to increase in increments of $5. The highest bid was $170 for a fixed gear bike, and they raised a total of $1,210.73, including registration fees.

The event itself was a great success and attracted many people, both in honor of the opening or for a quick fix on their bikes. The new shop, completely rebuilt from the ground up, looks amazing, and of course houses knowledgeable, smiling bicycle mechanics. So if you find yourself in need of a tire pumping, chain oiling, or find yourself in the area, stop into AS Bike Shop to take a peek at the new locale.