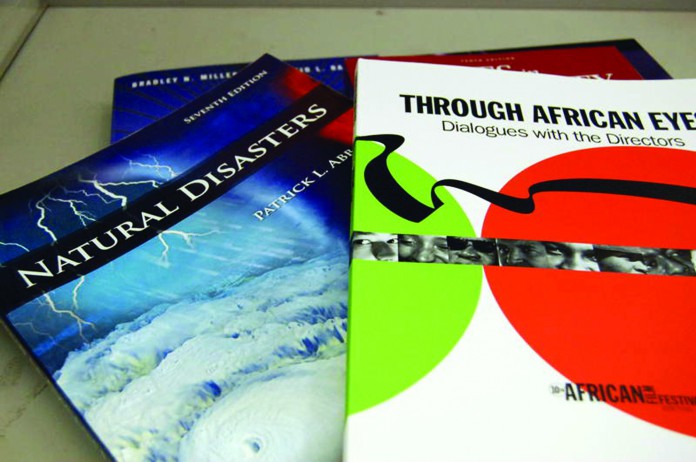 Are you a Humanities major and struggling to find ways to check off your Area C requirements on the list of â”things to do before graduation?” Or are you a Science major dreading your six writing requirements? Wipe the sweat off your brow, for below is a list of classes that will lessen the pain. While these classes cannot be considered easy per se, they are definitely easier than say, O-Chem for an Area C requirement. Look at these classes as suggestions if you are looking for classes next quarter that will fulfill these requirements. Keep in mind though that as of pass time space is limited, and some readers may have to resort to the now familiar process of crashing classes during the first week of spring quarter in order to secure a coveted spot.

Bringing the Gaucho back to the days when Dinosaurs were cherished, Geology 7 offers what many students consider one of the easiest and most interesting ways to earn an Area C for those who are not science-friendly. This class is offered next quarter on Mondays and Wednesdays between 11 a.m. to 12:15 p.m. and requires one discussion that meets at a variety of times once a week. The Geology department describes this class as, “The origin and diversification of dinosaurs, and the evolutionary relationship of dinosaurs (including their living descendents) to other major groups of vertebrates. Broad introduction including discussion of dinosaur ecology, anatomy, extinction, and paleogeography.” However, don’t expect to be watching “The Land Before Time” in this class, or diving into Dinosaur-cology right off the bat. You will not actually get into discussion of these long-gone gigantic beasts until the half-way mark of the quarter. Fifth year Linguistics major Blaine Watermann shares his experience in Geology 7. “It was a lot of fun. It’s very memorization-based with a lot of pictures.” Jokingly, he revealed, “The answer to the first question is Penguin.” All in all, Watermann enjoyed his experience in Geology 7, and wants to sit in on the class next quarter for fun.

This is another easier Area C class that is offered next quarter. You’ll be on the lower end of mathematical calculations, and will be discussing catastrophes and the potential effects on society. If you are good with concepts and memorizing facts, this class will be perfect for you. You may learn to love volcanic eruptions, earthquakes, and other natural potential dangers that have been made into Hollywood blockbusters for years.

Film classes are generally a lot of fun, especially classes in which you see films you have not seen anywhere else, and this is definitely one of those classes. Fulfilling a writing requirement is not going to be a walk in the park; however, it will be an interesting class to get a fresh perspective on Cinema, especially if you love watching films. This class meets twice a week Wednesdays at 6-7:50 p.m. and Thursdays 5-7:50 p.m.

Another interesting class that fulfills a writing requirement is Italian 179X, which has weekly film viewings and not as much reading. This class delves into classic Italian cinema as well as the major history surrounding Italy, including the reign of Fascism. However, it still fulfills a writing requirement due to the final paper assigned at the end of the quarter. According to second year UCSB student Hannah Peterson, “Italian 179X was slow at times, but in the end I feel I’ve definitely learned a lot about what goes on under the surface of these films and there really wasn’t too much writing involved.”

Classes that science majors should treat with caution are literature classes that offer a writing requirement. These classes will require a lot of reading, sometimes as many as nine books in one quarter, which is roughly one book per week. Shakespeare 105A and 105B give students a slight break, usually requiring only five short plays per quarter, but for students who are more geared toward sciences and math, these classes may still be problematic.

All in all, don’t worry too much about classes you need to take to fullfill requirements. Sometimes, the best classes you will take in your college career are the ones way outside your major, that kicked your ass and left you with a whole new perspective and conscious shift in life. After all, isn’t that what college is all about, stepping outside your comfort zone and trying something you’re unfamiliar with?