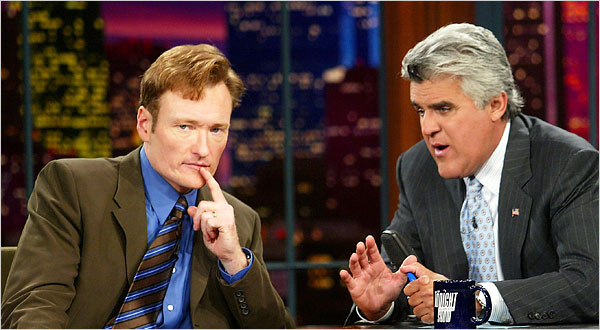 As of now, the fate of The Tonight Show host Conan O’Brien is unknown. The situation is looking bleak, as it seems Jay Leno will be taking over the franchise (yet again) after his 10 o’clock experiment, The Jay Leno Show, went bust. Hopefully, O’Brien will leave the “people of Earth” for a better place, one with an appreciation for good comedy and principle.

Conan isn’t known for his widespread appeal. In fact, his lack of it was likely his downfall in this late night fiasco. But despite this, when news broke of NBC’s decision to bump him from 11:35 to 12:05, legions of devoted fans came to his support. As of right now, The Facebook group “I’m With CoCo” has more than 200,000 members and is still growing with every second. “Team Conan” trails with about 135,000 members. The New York Times reported that, on Twitter, support was an immense 50-to-1 for Team Conan and Team Leno, respectively.

What exactly is so appealing about Mr. O’Brien? Could it be his tall, dazzling red hair? His pale, laughably-translucent skin? Perhaps so. But, surely, there is much more to this late-night talk show host.

O’Brien is different from other celebrities. When transitioning to the coveted Tonight Show, he knew he would have a much broader audience. Many fans worried that O’Brien would tame his humor to cater to middle-America. NBC executives encouraged him to sell his humor towards a wider, more profitable audience, essentially, to water it down. But he didn’t change a thing, and continued to please his loyal fans, proving to everyone that selling out wasn’t on his agenda. This became more evident as he refused to comply with NBC’s wishes to bump him another half hour on the principle that The Tonight Show at 12:05 wouldn’t be the same and, in fact, would be The Tomorrow Show.

David Letterman, with his recent scandals and his torrent of bitterness, is hardly a respectable figure anymore. Jay Leno pokes fun at average people with his sense of superiority, insulting their intelligence in segments like “Jaywalking.” These men may both be major late-night hosts, but are past their prime and out of touch with the new generation.

But according to David Letterman, the Harvard-educated Conan O’Brien is a “nice guy and a smart fellow.” Perhaps despite his Harvard education, Oâ€™Brien is completely inclusive in his good-natured humor. He doesn’t try to appeal to some sort of intelligent elite; in fact, his humor is often quite goofy and sometimes low-brow. But it is never malicious. He doesn’t try to get a laugh at the expense of others, shattering the concept that one has to be mean to be funny. It is all in good fun.

Conan’s job is to get in there every night and make people happy. In this respect, he is truly a successful workaholic. After a long, stressful day, his goofy show reminds us not to take life so seriously. O’Brien has a message that goes along with his humor. He encourages us to laugh at ourselves, because “when all else fails, there’s always delusion.”

The man himself was no overnight success. In fact, he’s had his share of failures; his first several years hosting Late Night were disastrous and the criticism was harsh. But this only proved to shape the joyous, playful person he is today and his success can serve as an inspiration for the rest of us. He is another example of how, without failure, we can never achieve success.

Of course, many of us don’t think about this stuff. We don’t care. We just want the funny man to deliver! And that is exactly what he does every night. It is no wonder why hundreds of thousands of people jumped to his support when NBC gave him and his Tonight Show the boot. Clearly, Conan O’Brien has touched the hearts and minds of many people. It must also be no wonder, then, that the ever-growing “I’m With CoCo” Facebook group is filed under the category “Religious Organization.”