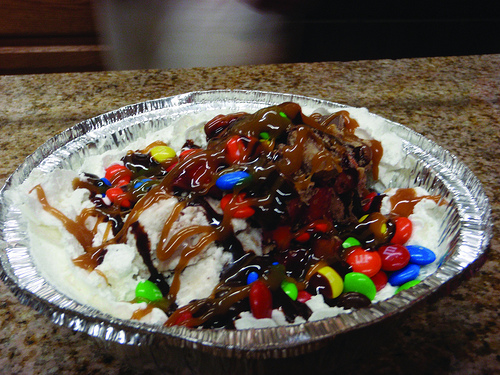 Sweet Tooth, a new Isla Vista sweet shop offering slightly different fare than IV Drip, opened its doors to customers last month. Though it currently lacks an above-the-door sign proclaiming its title, its blinking OPEN sign was enough to draw me into the store while touring Isla Vista with my mother while she was visiting one weekend.

As I stepped across the threshold, my nostrils were bombarded with the sweet sensations of chocolate, ice cream, and various candies. One of Sweet Tooth’s owners, Jordan Sweis, immediately greeted us as we entered the cozy interior of the store that he and his wife own. He offered to let me try one of his specialty dishes that he claims sets him apart from IV Drip, the “420 special”, or the “Wasted special”. When I laughed about the titles, Sweis said, “They’re” called that for a reason. They’re huge and delicious, exactly what intoxicated students want.”

He told me that these specials consisted of a giant chewy or crunchy cookie base almost the size of a pie, with scoops of ice cream, 2-3 toppings, whipped cream, chocolate sauce, and more slathered on the top. Wanting to try these specials in the aforementioned frame of mind with the right amount of friends with me to help consume such an epic feast, I opted to just try a tasty $1.50 ice cream cookie sandwich that almost rivaled those of IV Drip’s at the moment and come back on another day when I felt prepared to conquer the possibly unbeatable 420 special.

A Friday night not too far from that day, I rounded up my friends for an adventure to Sweet Tooth after we were all done with the night’s various festivities around 1 AM. I considered it a definite perk that a sweet store stayed open until 1:30 AM on the weekends. We traveled past the always busy Freebirds to Sweet Tooth, located near the main drag of Pardall.

When we entered the small store, we noticed that there was a group of three guys in line ahead of us who had also ordered the monstrosity of a dessert we were about to try, the 420 special. As we waited in line, I noted that although the store was rather small, it seemed to be bursting with plenty of sweets all around us, including cookies, ice cream, soda and other drinks, smoothies, cake, donuts, chocolates, baklava, various candies, and coffee.

We watched Sweis construct our 420 special as our mouths watered. While he constructed his masterpiece, Sweis continued to tell me about the store, saying that everything we saw was fresh. Continued Sweis, “the store tends to be busy with lots of students, but that is good, because we make good money. Normally, our 420 special is $5.99, which most students find to be a good price.” Sweis pulled a cookie base out (we chose chewy over crunchy) and put 3 scoops of ice cream on it, with whipped cream and chocolate sauce. Then we had a choice of three toppings. We got M+M’s, gummy bears, and marshmallows, although there are plenty of other options to chose from. Sweis was very generous with his toppings. Holding our 420 special, we left the store, but we couldn’t make it more than a couple feet before we all began to attack the dessert viciously.

One of my taste-testing friends, Riki Erickson, described the cookie as “orgasmically pleasing.” For me, it was an incredible sugar overload (almost a little too sweet, but still delightful). I can say that being in the right state of mind with the proper amount of friends made this dessert highly enjoyable, but if you’re super hungry and have the ability to eat diabetes-inducing desserts on your own, then go for the challenge. As for visiting Sweet Tooth itself in the future, I would certainly return to its reasonably priced mouthwatering desserts for my occasional indulgence in sweetness.