Ocean Road currently is a calm space between campus and Isla Vista. Aside from traffic around class time at I.V. Theater, the bike and pedestrian path is usually deserted. The University, which owns all of the land up to the beginning of Isla Vista, sees potential in the empty lots along Ocean Road (to your right as you walk towards the ocean). Over the last several years, the Office of the Chancellor has begun to update the Long Range Development Plan (LRDP) for 2025 (information on this plan is available at www.ucsbvision2025.com) that seeks to address the future needs of the University, especially the need for additional housing for students (undergraduate and graduate), faculty, and staff. The LRDP projects that, based on a one percent annual growth rate, there will be an enrollment of 25,000 in 2025.

The Campus Housing Study, part of the LRDP, proposes that the future housing should be absorbed by newly created neighborhoods on what is now vacant land. Thus, Ocean Road. “Under-utilized property along Ocean Road at the western edge of the Main Campus, will be developed with a mix of staff, faculty, and graduate student housing to provide an improved interface with the adjacent community of Isla Vista” (Ocean Road Pattern Book). This development is one of eight areas of proposed development. The LRDP proposes development at the Storke and Santa Ynez neighborhoods, around Francisco Torres, in West Campus and the West Campus Mesa, the area around Facilities Management (an area near the intersection of Mesa Rd. and Stadium Rd.), and further development around Main Campus residence halls. However, the Ocean Road development is unique in its potential impact on the dynamic relationship between the University and Isla Vista.

The Pardall Tunnel is a symbol of the division between campus and Isla Vista. As part of the plan for the Ocean Road development, “the present barrier-like tunnel and overpass will be replaced with a dynamic urban environment connecting the campus to downtown Isla Vista.” Such a development would make the area the beginning of a main artery connecting the campus to the most commercialized section of Isla Vista, which is due to be redeveloped, through the Isla Vista Master Plan, before 2025.

This coincidence seems to suggest at least a symbiotic relationship between the IV Master Plan and the LRDP, which suggests that the University will possibly have a larger influence (whether overtly or behind-the-scenes) in Isla Vista. According to Liz Buda, former Student Voice candidate for AS Vice President of External Affairs, the University has interfered in Isla Vista mainly to protect the public image of the University and of its student body. Life in Isla Vista has a great impact on this public image, and the local businesses play a large role in defining Isla Vista student culture. The redevelopment of the intersection of Pardall Rd. and Ocean Rd. would funnel University students, faculty, and staff into a redeveloped and commercialized “downtown Isla Vista,” which raises the question; would this link the University to some of the local business so much that it could have indirect influence in the affairs of Isla Vista? An attempt to contact Mark Fischer,who is the Associate Vice Chancellor, Campus Design and Facilities, and sits on the Campus Planning Committee and is Co-Chair of the Design Review Committee, to get a glimpse of the administration’s perspective on the relationship between Isla Vista and the University, was unsuccessful.

The administration of the University and Isla Vista businesses have the most power and the loudest voices in the LRDP and the Master Plan, but until June 23 the public is allowed to comment on the LRDP. There is a public hearing on Wednesday, June 4, at 7 pm, in Isla Vista Theater. 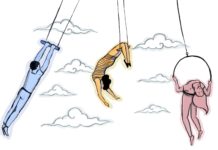