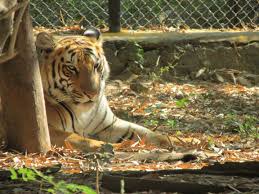 As much of America adjusted to life indoors, memes of a mulleted man began flooding social media sites. So did threads debating whether a woman named Carole Baskin murdered her husband. At first glance, these posts appear to come from some bizarre mockumentary, or a campy film à la “The Room.”

But they’re actually from “Tiger King,” Netflix’s newest smash-hit documentary series directed by Eric Goode and Rebecca Chaiklin. In the first 10 days after its release, “Tiger King” garnered over 34 million views, according to Nielsen ratings.

And it’s easy to see why. The titular “Tiger King,” a man named Joe Exotic, is larger than life. When we first meet Exotic — whose real last name is Maldonado-Passage — he is in federal prison, but he has worn many other hats: zookeeper, presidential candidate, vlogger, and aspiring country music star, to name a few.

“Tiger King” jumps between past and present to tell the story of Joe Exotic’s “dethroning.” Along the way, we meet the motley crew staffing Exotic’s big cat zoo, including his two husbands. We also meet Exotic’s sworn nemesis, Carole Baskin, a persistent animal rights activist whom Exotic later tries to murder.

Baskin, who we frequently see in flower crowns and cat-themed attire, is known online for her catchphrase — “Hey, all you cool cats and kittens!” — and, of course, for the accusations of murdering her ex-husband. Each episode is packed with twists and turns, all of them certain to make you laugh, drop your jaw, or — my go-to — mutter “Oh, my god.”

But as “Tiger King” provides laughter and cheap thrills during our anxiety-ridden times, Goode and Chaiklin’s sensationalist direction allows us to forget — or even take pleasure in — the suffering of many of those involved in the Joe Exotic saga. And there’s a lot of it.

The exploitation and abuse of tigers and other big cats is largely forgotten, even though it’s supposedly the show’s premise. The series is so engrossed in Exotic’s perplexing character that the only substantial discussion of widespread big cat abuse comes at the very end of the series, in a series of title cards that seem haphazardly tacked-on.

Other issues are glossed over in a similar fashion. That two of Exotic’s husbands are nearly 40 years his junior is a non-issue. So, too, are the drug abuse, gun violence, and labor exploitation that plague several of the show’s subjects. We learn that another prominent big cat owner’s park is run in a cult-like fashion — and then we never hear of it again.

Meanwhile, other parts of the show are played up for shock value — or perhaps, in our digital age, meme value. Episode three fixates almost obsessively on the possibility that Baskin murdered her husband. (Howard Baskin, Carole’s current husband, later told the Tampa Bay Times about the “betrayal” he felt from the show creators.)

We are made to watch grisly footage of a tiger biting an employee’s arm. Another clip of Exotic shooting two of his cats with a shotgun. And the most haunting one: security-camera footage of an employee’s reaction to another man’s gun suicide right before his eyes, concealed by the camera angle.

These gut-wrenching moments occur, and minutes later we return to Exotic’s wacky shenanigans — a tonal whiplash that left me queasy and confused at the end of every episode. I couldn’t wrap my head around the narrative Goode and Chaiklin were trying to create. Who were we supposed to empathize with? What was I supposed to feel or think or do after watching the series? What was the point?

It only recently hit me. The point of “Tiger King” was never to inform, or to garner empathy, or to call us viewers to action. The show was created to entertain. That explains its fixation on the violent, the vulgar — the viral. Even as we watch real people and animals suffer, none of it seems important or real because the show doesn’t ask for our empathy. Every sequence appears carefully crafted to elicit a meme, a tweet, a muttered “Oh, my god.”

It isn’t completely wrong for viewers to be entertained by “Tiger King.” The show is incredibly entertaining, and it intends to be. But there’s something unsettling about meme-ifying a story full of violence and exploitation. Or about using photos of Exotic and his deceased husband as reaction images when we know the grim circumstances of his death. And I fear “Tiger King” encourages us to dismiss its cast as lower-class “hicks,” when in fact many of these people have been failed by American capitalism and abysmal governance.

In the end, I learned an important lesson from watching “Tiger King,” although it wasn’t about the exploitation of big cats. Instead, I was able to see for myself how virality comes at the cost of compassion. For us, the entertainment is fleeting. But for those featured in “Tiger King,” there’s no option to change the channel. They carry it all with them as we laugh, and as Netflix brings in the big bucks.