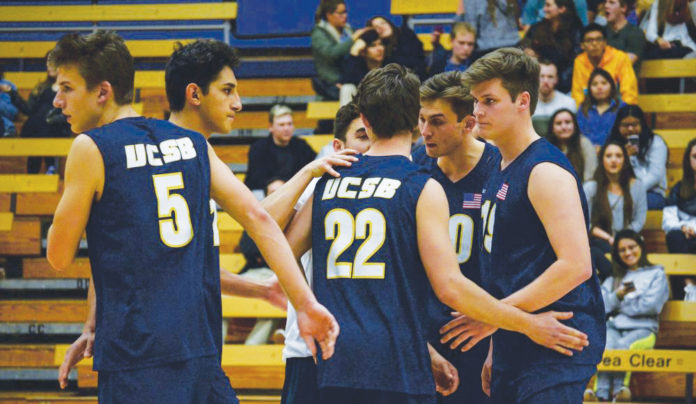 After their games against Pepperdine on Feb. 26 and the University of Southern California (USC) on Feb. 29, player Randy DeWeese earned two consecutive Big West Athlete of the Week titles. In both games, DeWeese saw four digs, a solo block, and 20 kills in the game against the Trojans, while he saw six kills, 15 digs, and five blocks against Pepperdine.

The Gauchos defeated UC Los Angeles (UCLA) on the March 3, maintaining their undefeated status on their home court. The Bruins took the lead in the first set, however, the Gauchos played well defensively, seeing 16 team blocks and 36 digs. A series of successful attacks and defensive plays by the Gauchos led them to take the remaining three sets and earn themselves a 3-1 win.

Following the conference opener, the Gauchos continue to be undefeated on their home court with a win-loss record of 8-0. In their eighth win on their home court, the team battled it out with the Tritons, struggling in the first two sets.

Right off the bat, the Tritons took the lead and maintained a solid five-point lead for most of the first set. UCSB saw several service errors in the first set which contributed to the Tritons maintaining their lead for the remainder of the set. The Gauchos attempted to close the gap and almost did but, in the end, they weren’t able to keep the Tritons from taking the first point of the game.

In the second and third sets, the Gauchos continued to struggle against the Tritons for the lead, but this time the battle ended in two points for the Gauchos, winning by two points in the second set (25-23) and by four in the third (25-21).

The Gauchos were ultimately able to finish the game well, holding the Tritons to a single point. The team also saw an impressive performance in the fourth set, taking their first starting lead of the game. The team took the lead from the start and saw a nine-point lead that UCSD attempted to close near the end of the set, but ultimately failed. The Gauchos won the set 25-16, earning their third and final point of the game.

Next week, the Gauchos will play a series of home-and-home games against Long Beach, followed by California State University, Northridge and UC Irvine in the coming weeks before playing against No.1 Hawaii in two consecutive home games.