The taco truck is perhaps the most ubiquitous of food trucks. Long before the current renaissance of gourmet and hipster food trucks, the humble taco truck had been serving quick and quality Mexican food on the move. It may not be the most authentic or unique Mexican food, but when you’re at a sporting event or large job site and your only other option is a guy pulling rubbery hot dogs and soggy buns out of an old wagon with an umbrella on top, the choice is easy.

Altamirano’s Mexican Grill recently ventured into I.V. with a taco truck that parks in the lot between Campus Cuts and South Coast Deli. Their other two locations are in Old Town Goleta and Santa Barbara. The truck’s menu is made up of classic taco truck staples: tacos, burritos, quesadillas, tortas, nachos, and chips with guacamole. But can a taco truck survive in Isla Vista, which already has three Mexican restaurants?

The selection may not seem impressive, but the choice of meats and other fillings is quite diverse. For each meal you have the option of choosing from asada, chicken, carnitas, adobado, chorizo, veggies, and chicharron. Fish is available for tacos only.

Prices aren’t as cheap as I expected for a truck of this kind, but they are definitely fair by Isla Vista standards, with the exception of chips and guacamole for $6.00. Tacos are normally $2.50 each (fish is $4.50) and you need at least two to be full because they’re small in typical street taco style. Taco Tuesdays, however, are a true deal — three tacos of your choice for $5.00, a.k.a. three for the price of two.

For this review, I tried asada, adobado, and chicken. The tacos’ presentation was a little bland and lackluster, but the taste is not. Even before adding any of the four salsas or three vegetable toppings available, the flavor of all three meats was powerful from the first bite. As an added bonus, the corn tortillas were quite tasty on their own, and weren’t dry enough to fall apart in your hands like many cheap tacos do. 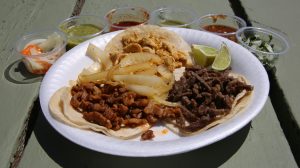 The adobada pork was perfectly cooked, tender, and surprisingly not greasy. It wasn’t wildly different from other adobada I’ve had, but the execution was outstanding. Too often at other places, it seems as though the meat is cooked without any marinade and seasonings are dumped on as an afterthought.

Unfortunately, the chicken was not as amazing. It was so flavorful yet so dry. After the first bite, I started guzzling horchata almost immediately in a futile attempt to return some moisture to my parched mouth. I was caught in limbo between trying to enjoy the savory and spicy flavors and keeping the inside of my mouth from drying up faster than Santa Barbara’s water supply.

The asada fell somewhere in between the perfectly balanced adobado and the chalky chicken. It was slightly overcooked, but as with the other meats it was incredibly flavorful.

The three tacos I ordered would be a satisfying meal on their own and enough to fill all but the emptiest of stomachs, but in the name of science I ordered a carnitas torta. Unlike the tacos, the torta came fully dressed and loaded with beans, guacamole, sour cream, peppers, and salsa fresca. Resting on a moist yet crisply toasted roll, the enormous and dense torta had my stomach more stuffed than a Saturday night of nonstop Gauchoball.

As delicious and filling as the torta was, the best decision I made at Altamirano’s taco truck was ordering a $3 horchata. While I couldn’t find any size printed on the cup it came in, I can say the horchata was huge for the price point and was extremely effective at washing down the salsas, pickled peppers, and onions I tried. The heat from one of the salsas was so concentrated that I thought I had given my mouth a chemical burn after a bite of a taco doused with it, but a single sip of rich horchata soothed my pathetically spice-intolerant Caucasian mouth.

As a native San Diegan, I pride myself on being a sommelier of inexpensive and Americanized Mexican cuisine. I will admit I have little knowledge of traditional Mexican food, but living 30 minutes from the border exposes you to a staggering variety of options, and living on a college budget means you avoid any kind of fancy, sit-down restaurant.

If Altamirano’s taco truck showed up in San Diego, it would fit right in, but how does it fare in Isla Vista? Compared to Freebirds, it is undoubtedly more authentic and satisfying in every way, unless you’re looking for vegetarian options; in that case, Altamirano’s can’t compete. Compared to Super Cucas, its very similar. Cucas may have a larger menu, but the taste and quality of ingredients are very similar, although Altamirano’s is quicker in preparing your food. Rosarito has a similarly simple menu and considerably larger burritos, but the freshness of ingredients and variety of seasonings is much better at Altamirano’s.