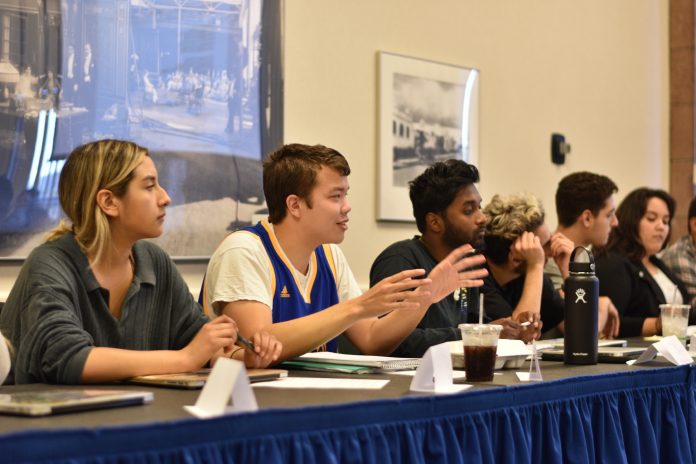 The Associated Students Senate passed a resolution at its final meeting on Wednesday condemning and recommending a boycott of Giovanni’s Pizza, following an incident with students who alleged that the pizzeria racially discriminated against them.

After going back and forth about the language of the resolution, the Senate agreed to pass it by a 24-0-1 vote, with one abstention by On-Campus Senator Derek Yang. Per the resolution, A.S. will now officially prescribe entities “to not purchase or give funds to purchase” from Gio’s “until conditions are met and unjust discriminatory practices are not exercised.” The conditions include an official apology from the management of the Isla Vista location.

“It is unjust to be supporting an institution that condones practice of hatred against University of California, Santa Barbara students based on their personal identities and backgrounds,” the resolution read.

The incident in question occurred two weeks ago when a group of friends crowded into Gio’s with the intention to buy beer. The students, who are Mexican, said that their identifications were rejected while a German friend received beer with a foreign ID. The students also said they were harassed by fellow patrons and were removed from the restaurant by management.

Manager Rosemary Moll denied any racial motives to The Bottom Line, and she claimed that she was simply acting to protect the restaurant’s liquor license because she was unfamiliar with the IDs.

Senator Derek Yang spoke in defense of Gio’s, saying that it’s wrong to assume the worst intentions of someone else.

“Private businesses, they have the right to refuse service to anyone they want,” Yang said, “and there might have been so many other factors that went into this other than blatant discrimination. While I agree that discriminatory practices are disgusting and they should not exist, we can’t just cry discrimination every single time.”

Senator Grecia Martinez expressed that her responsibility as a senator wasn’t to pass legal judgement on who the guilty party was but rather to make a statement that shows support for the students she represents. Asking for physical evidence, she explained, is “really insensitive” because it places the burden of proof on the students at risk.

Much of the contention surrounding the resolution involved the language Senator Steven Ho and Senator Andrea Reyes’ authored, specifically as to whether or not the Senate would be overstepping its boundaries by encouraging a boycott of Gio’s institution.

“This isn’t as big of a deal as we’re making it seem. By using the word boycott, we’re not ripping thousands of dollars out of Giovanni’s hands,” said Senator Stoddy Carey. Senator Reyes elaborated that the boycott wouldn’t be a complete attack on the local business. Instead, to her, it’s a recommendation that students support a different pizzeria in I.V. such as Woodstock’s.

“I really don’t understand what the issue with the word ‘boycott’ is,” said Senator Dhishal Jayasinghe. “This is a case of racism, and the boycott is temporary based on an apology. And again, it recommends, it doesn’t actually bar anyone from going and eating at Gio’s.”

Defending the boycott, Hieu Le, the newly elected A.S. President, stated “We really need to have very strong language when it comes to how we address businesses and services who discriminate. Having language that has social consequences in the practices they do is very important…Let the community know that there is no room here for acts of hate.”