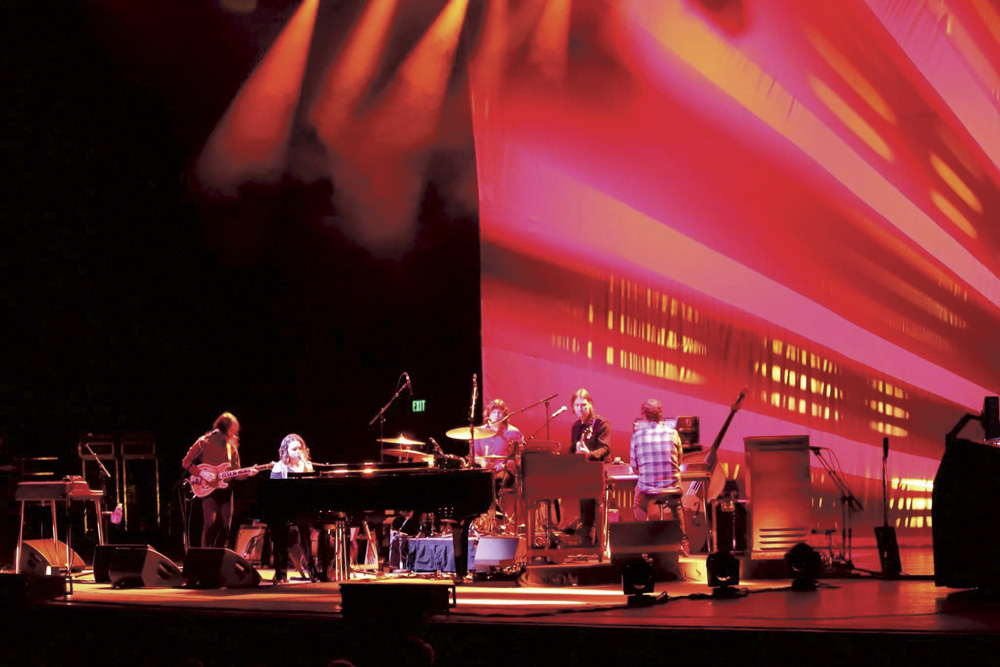 Imagine yourself sitting at the fanciest restaurant you have ever been to in your life. Picture the glamour of the restaurant, and the darkness with only a shade of purple lighting the whole room. Through that darkness you see one beam of light, and it shines on Norah Jones sitting at the front of the restaurant on her big grand piano, playing you a tune with her smoky soulful voice that echoes through the whole room, silencing her audience.

Now, instead of the restaurant, think of the stage of the Santa Barbara Bowl, leaving intact Jones on her grand piano.

Jones headlined a show at the Santa Barbara Bowl on Thursday, and the intimacy of her show was reminiscent of a solo pianist at a fancy restaurant. People crowded the amphitheater to listen to the nine-time Grammy Award-winner perform songs from her new album, Day Breaks, as well as some old nostalgic tunes from her previous albums. Accompanying Jones were her bandmates: keyboard and accordion player Pete Remm, guitarist Jason Roberts, bassist Josh Lattanzi, and drummer Greg Wieczorek, who all surrounded her as she sat down center stage on her black grand piano.

When Jones performed, the crowd went silent to hear her melodic voice dance through the brisk Santa Barbara air. Onstage, the lights were dim as it played around with the colors of day which fits in the theme of her album Day Breaks. Another detail that correlated with Jones’ album was the background, which had those notable beaming lines of light alike to its cover art. Everything set the mood for a romantic fall night under the stars.

As her fingers pitter-pattered on the key notes, the crowd fell silent for Jones’s sultry, mystic voice echoing through the stadium. She also interacted with the crowd throughout the night, going as far as dedicating her song “Come Away with Me” to a couple that sat in front of her as she was on stage.

For “Come Away with Me,” Jones exposed incredible raw emotion, for which she stepped away from her piano and performed on a red electric guitar. The beautiful, melodic softness brought nostalgia to all the members of her audience. For Jones’ next song, she played “Easy,” which brought more of a rock tone to the night, ranging from a calm, smooth sound to a more upbeat rise, as she played alongside bassist Lattanzi, who was celebrating his birthday.

After playing the guitar for a while, she returned to her grand piano and performed another old favorite, “Don’t Know Why.” Jones played this rendition softly compared to the album version. If she hadn’t already captured the audience’s ears, this was the moment where she really did.

After walking offstage, she came back to play a couple songs off her new album for an encore performance that was alike to a traveling folk-singing band coming through town. Her bandmates were holding carry-on musical instruments and a cello, while Jones strapped on her guitar.

At this time people stood up from their seats and walked toward the stage to hear her perform her last couple of songs. There was a moment of connection as she stared down at the standing crowd, as they all sang along with her final acoustic songs. When it was all over, people filed out of the amphitheater, holding an intimate, soothing, and irreplaceable experience with Jones as a lasting memory.