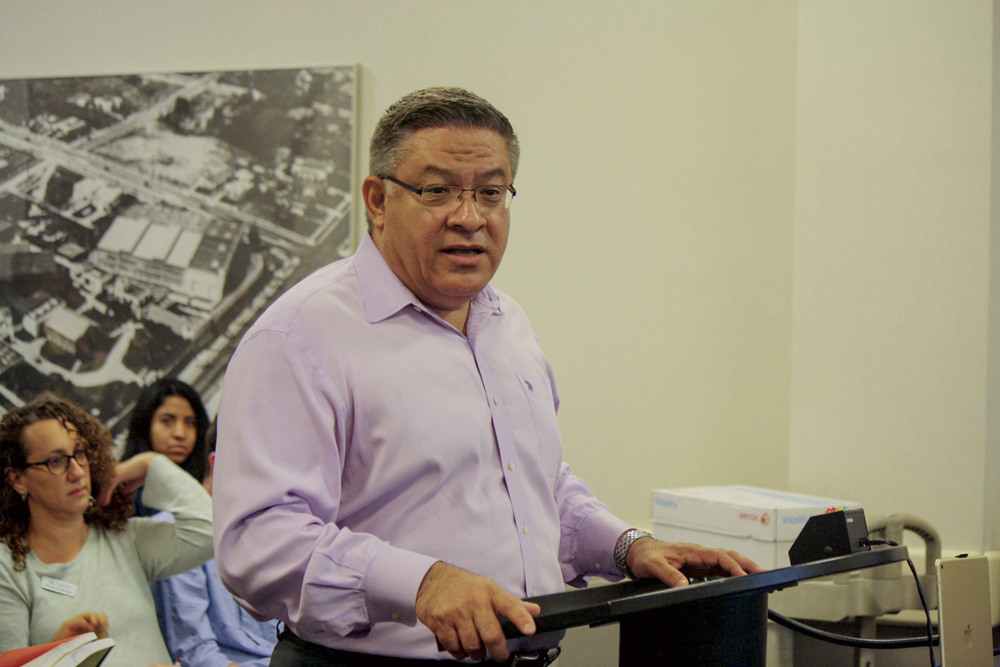 Salud Carbajal, the Democratic candidate for California’s 24th Congressional District seat, spoke about the need for student participation in politics during a brief round of interviews at the University of California, Santa Barbara on Oct. 27.

Either Carbajal or Republican candidate Justin Fareed will hold the seat in Congress following the Nov. 8 election. Carbajal emerged as the top vote-getter in the June primary, winning 31.9 percent of the district vote. The 24th District is comprised of the counties of Santa Barbara and San Luis Obispo, as well as western Ventura County.

Carbajal spoke primarily about student involvement during a short interview. Fareed, his opponent in the upcoming election, spoke to The Bottom Line a day previously, on Oct. 26.

How have you garnered student engagement and involvement on campus, and what problems have you encountered, if any?

Well, I’m a graduate of UCSB, so I remember the days of engagement here on campus — not only internally, but in Isla Vista and in various races externally. In terms of my campaign, I am pleased to say we have been engaging student groups to participate with us and partner in mobilizing students to vote, register, and get out the vote. There’s been a huge level of participation from UCSB and I’m very pleased they have stepped up to support me in huge numbers.

It’s been absolutely positive. This year, as in previous elections, there’s been record numbers of students registered. They’ve become really engaged in the local elections and my campaign.

We have a very politically active campus. Students are often trying to get involved in some way or the other. There are students here, however, who are disillusioned with Congress and what it’s capable of doing. Do you have any thoughts on that?

Well, I don’t blame them. I think when you consider the gridlock we’ve seen in Congress, where we’ve had a do-nothing Congress these past few years — they have not moved forward public policy legislation to address the issues that working middle-class families and students are very concerned about.

It’s very disheartening: issues like financial aid and making [it] more readily available and accessible so students can pursue higher education [and] addressing the issue of student debt so that students can refinance their debt like you refinance a mortgage. Even more important than that: to make sure banks are not profiting on the backs of any student wishing to pursue a higher education and who needs to take out a loan. The loans are given at significant interest rates. It’s atrocious. We need to do everything possible to reform those issues.

I would understand why some students are disillusioned with Congress because they haven’t made progress on the important issues we care about: in addition to education, addressing climate change, making sure we are invested in renewable energy, doing everything to pass sensible gun laws that address some of the needless violence here on this campus, for example, and throughout the country. I certainly understand, but I hope to be able to champion those issues. As a Gaucho myself, [I want to] be able to make Gauchos proud in Washington as their next representative in the United States Congress.

For students to try and get involved, does it start with investing in local politics—since we do have, in Isla Vista, a few big decisions coming up—or do the big changes need to come from Washington?

I think it starts at all levels. Certainly, locally there is a more direct impact where you can see participation. Participating at all levels is so important, and finding your niche — the area where you want to have the impact in. It could be trying to get your next member of Congress elected or trying to get your Supervisor elected, or the two measures that are going to bring about the Community Services District here in Isla Vista. Whatever the issue might be, students need to find the impact that they’re trying to make at each level.

What have you learned from and about students at UCSB during your years as Supervisor?

I learned that UCSB is an extraordinary university. It’s a great place not only to go to college but to cut your teeth into getting involved and engaged on issues that impact our communities, our local university, and our world and nation. UCSB is one of the treasures in our country where you can come get an education and learn about what it’s all about to get civically engaged to make a difference.