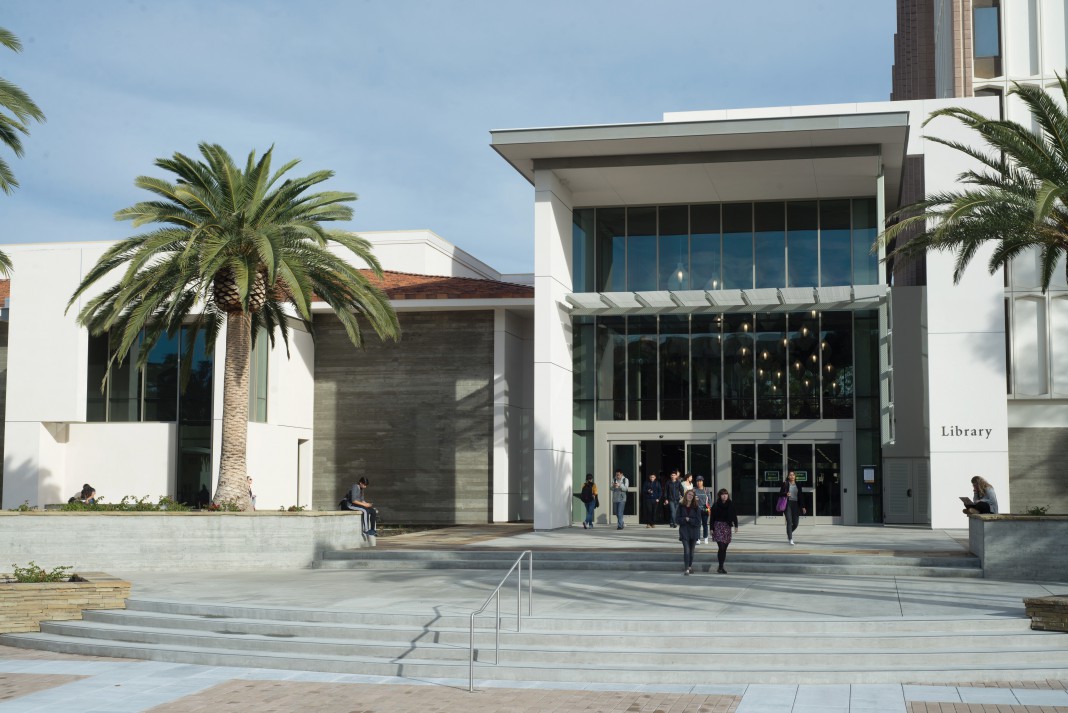 The new University of California, Santa Barbara library opened its doors on Mon., Jan. 4 in conjunction with the first day of Winter Quarter. After a two and a half year-long process, the library welcomed students to enjoy its new features, including a cafe, study rooms and multiple lounges. The official grand opening occurred on Wed., Jan. 13.

“If you were here on Monday, students were literally running into the library when we opened the doors. Just so excited to see and play with all the new technology,” Assistant University Librarian for Outreach and Academic Collaboration Rebecca Metzger said.

In 1952, the two-story library was initially built to accommodate under 2,000 enrolled students. Over the years, the library expanded and renovated to keep up with the growing number of students. According to Metzger, the library was the first building on campus.

Construction for the recent expansion began in August 2013. The architects of the project built upon a theme of the library serving as a crossroads of the campus. “The idea was that the library would always be at the center of campus,” Metzger said. “Their theme was the crossroads of the University … The campus just grew around it”

Those interested in hearing about the construction process and renovation may attend a talk held by the architects and designers of the new library on Thurs., Jan. 21 at 5:30 PM.

The library features three new entrances with the former library entrance now being closed. The Paseo, the area that connects the old library building and the new one, hosts two entrances, the Reference Desk and the Services Desk.

In addition, there is a new system of referring to the two main sides of the library. “Ocean Side” refers to everything south of the Paseo, or the building formerly known as Davidson Library. “Mountain Side” is the part of the library that is north of the Paseo.

Another addition to the library is the Learning Commons, which occupies floors one and two of Mountain Side. Filled with group study rooms, computers, and comfortable furniture, the Learning Commons is open 24/7. On the first floor is the new Summit Cafe, which replaces the old Study Bean. Students also have the option of studying in the cafe as it is stocked with chairs and tables.

The graduating class of 2016 dedicated their senior gift to the library, which includes two egg chairs that will be joining the library soon.

“[The gift] included charging stations and stuff to make the Learning Commons a little more student friendly,” Metzger said. “The learning commons was designed to be this destination for student success, collaborative work and active learning. The idea is to create a little bit of a comfort area to promote health and wellness in studying and taking breaks. We are hoping to get a game table and some things over time, so that there could be a little study break area.”

One added benefit is the Group Study Spaces. Students are now able to book study rooms up to two weeks in advance for a period of two hours.

In contrast to Ocean Side, Mountain Side is more modern with many windows to bring in natural light. The Paseo also has high ceilings for the same reason.

“The library is a symbol of this place where people come to do interdisciplinary work and to collaborate, no matter what part of campus or field or discipline you’re from,” Metzger said. “The library is for everyone on campus.”