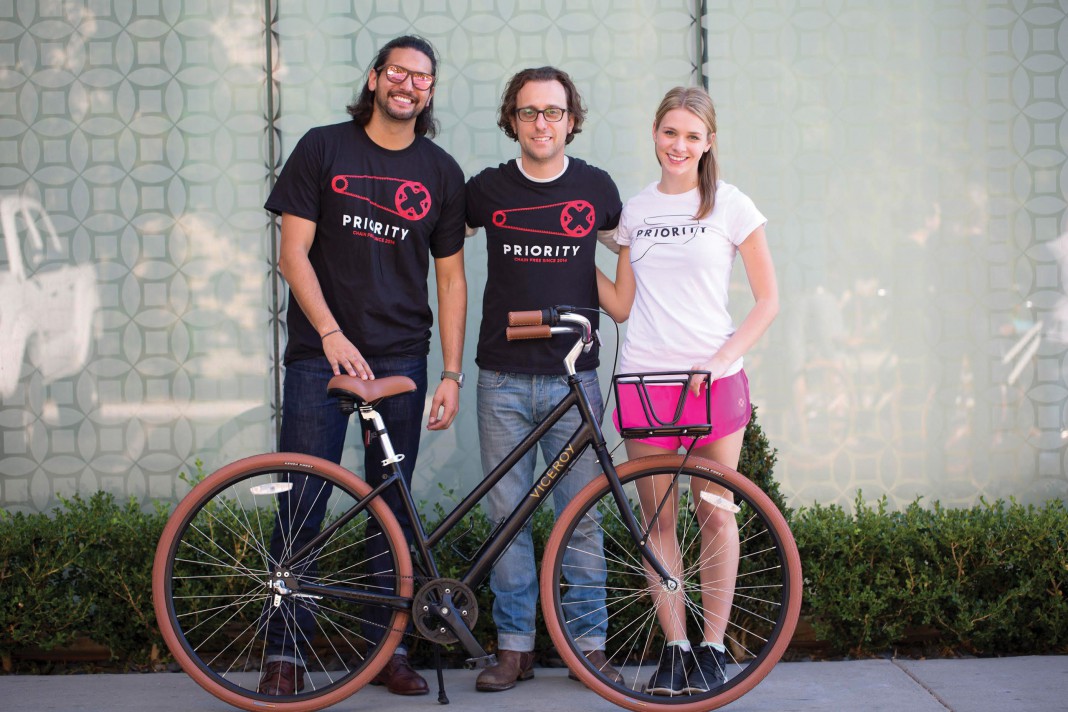 The University of California, Santa Barbara may be a research university, but pre-med students aren’t the only thing this school produces. Meet Connor Swegle and David Weiner, co-founders of Priority Bicycles, an acclaimed bicycle manufacturing company based in New York City.

Swegle and Weiner graduated from UCSB in 2002, each with a degree in Business Economics.

“We met in the dorms, and as repayment for me letting him borrow a helmet, he got me a job at Bike-alog [a bicycle software company in Goleta] after our first year,” Swegle said. “Between 8 AM classes — he worked full time and I worked part time and ran track for UCSB (former school record holder!) — working together and living a block from each other with many mutual friends, we got close through graduation.”

After graduating UCSB, Swegle and Weiner moved to Los Angeles to pursue their post-college careers. While Weiner worked for the bicycle manufacturing company Giant Bicycles, Swegle worked in entertainment branding for companies including ESPN and Discovery. Both jobs allowed them to travel cross country from Los Angeles to New York, where Priority Bicycles was eventually founded.

As the popularity and efficiency of online retail increased, the idea for Priority Bicycles was born. According to Swegle, Weiner had been in the market for a new, good quality bicycle for years before he came up with his own design for a low-maintenance bicycle that could be delivered at an affordable price. In 2014, this idea became a reality. Soon after having his first child, Weiner quit his job, gave Swegle a call and asked him to start a bicycle company.

“On one hand Priority was about getting back to what was important,” Swegle said. “Spending time with family and friends — feeling passionate about work again. On the other hand, it was about the customer. Priority was a bike that would make cycling simple. A high-quality, beautifully designed bicycle, at a fair price that would be easy to find, easy to buy, easy to ride and easy to maintain.”

a Priority bicycle is unique, but it also comes with a family-centered vibe, created and shipped by people who love what you love: easy, efficient transportation.

The bicycle’s design was perfect for the average Joe: “the recreational rider who wanted to hop on and head to a farmers market, go to the gym or grab a drink and bite with friends,” according to Swegle. During the time of the company’s founding, Swegle says there were two cookie-cutter locations to purchase bikes: pro bike shops fit for professional cyclists but not for the everyday recreational user, and, well, places like Wal-Mart. Priority, launched on Kickstarter in July 2014, has since expanded to key countries worldwide, established partnerships with leading hotels and resorts and launched its second campaign for kids bicycles, The Priority Start. Priority has also been featured on NPR, Inc., and Men’s Journal, among other websites and publications.

Because Priority is customer direct, Isla Vista residents can purchase Priority bicycles now, although Swegle says that they would be happy to set up a free ride event. “Anyone want to give us their house on DP for a week?” he asked.

So, what makes Priority successful? Is it the innovative line of products, the customer direct services? Maybe, but from the looks of it, Priority is more than just a bicycle company. Swegle and Weiner have created a community within the bicycle world for people worldwide to connect on the same level; a Priority bicycle is unique, but it also comes with a family-centered vibe, created and shipped by people who love what you love: easy, efficient transportation.

“Personally, we are bike guys, we are into the outdoors, we are all about a healthy lifestyle and we are friends,” Swegle said. “We can help our customers get what they need, and we can help each other.”

After growing their company to become such a success, Swegle offered some advice to the students of his alma mater who aren’t exactly sure what they want to do after graduation.

“Those who are successful are the ones who work hard and create their own opportunities to pivot, adapt and find success,” he said. “If you don’t know what you want to do, start trying new things. You’ll often find that you try many things that you realize what you don’t want to do several times, before you land on what you do, learning a great deal along the way.”

As for the students who want to start their own businesses, Swegle’s best advice was to work toward being an expert at the major part of your business, and work with and around that.

“The truth of the matter is that building a business is hard. Every idea you have has been thought of before, and it is your ability to work, adapt and build that sets you apart. Hone your business skills, figure out what you are good at and what you’re not. Make friends and business contacts, and be ready to dive in when the time is right.”

Finally, Swegle noted that both his and Weiner’s careers were heavily influenced by the IV lifestyle. Just like us, they biked daily as UCSB students. Now they are providing people with bicycles every single day. They share this passion with their customers and with each other, and they encourage everyone — including each other — to take a break and take a ride.

“An environment that supports an outdoor lifestyle, everyday cycling and a balance of education and hard work has been a key foundation to who we are and to Priority Bicycles,” Swegle said. “If we could, we’d be back in IV Now!”