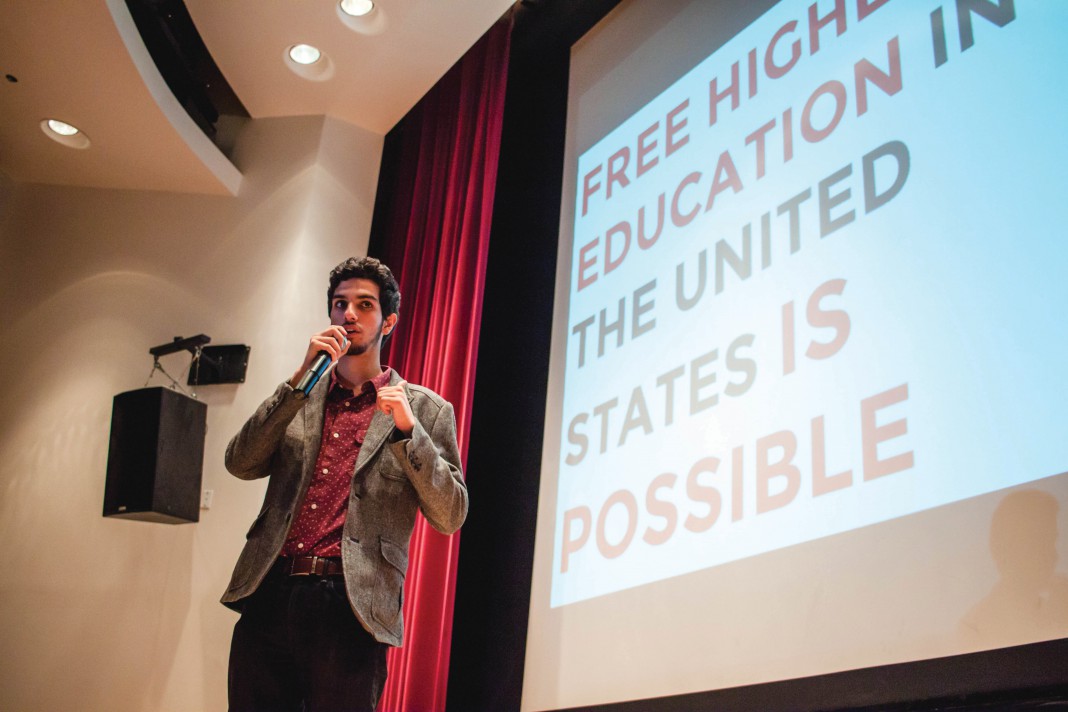 A coalition of student-led campus organizations at the University of California, Santa Barbara have spent the last couple of months preparing to participate in a nationwide demonstration known as the Million Student March. The Attainable, Accessible, Affordable UCSB coalition hosted an informational “Teach-In” outreach event on Wed., Nov. 4 to help educate students interested in participating in the march on the various historical, financial, political and social issues surrounding college affordability, tuition increases and student debt within the UC system.

Participants are uniting in solidarity to voice their concerns on what many students have seen as a broken, undervalued and underfunded system of higher education.

The Million Student March is an independent day of action taking place on nearly 100 college campuses across the country, including nine out of the ten UC campuses. Participants are uniting in solidarity to voice their concerns on what many students have seen as a broken, undervalued and underfunded system of higher education. The core of the Million Student March’s message revolves around its three key demands: the establishment of a tuition-free system of higher education, the cancellation of all student debt and the creation of a $15 minimum wage for all campus workers.

The UCSB march itself is set to take place on Thurs., Nov. 12 at 12 PM at Storke Plaza, with a series of planning events taking place in the interim. In the meantime, the coalition has been taking steps to ensure students are as informed and as prepared as possible in the run up to the march.

The goal of the march isn’t to push for any particular piece of legislation or any particular political candidate, nor to continue marching until demands are met. Rather, it is about creating a dialogue around the issue of college affordability to mobilize students and get the attention of lawmakers and presidential candidates, according to second year mathematics major and march organizer Kyle Butts.

“It is very much [about] bringing this [issue] to the forefront,” Butts said, “knowing this is what the students want and that, come November 2016, when students are out voting, they’re going to be keeping an eye out to see who listens to those demands.”

While UCSB’s coalition began preparing for the march as early as this summer, the underlying factors that have led to the dissatisfied consensus among UC students date back to 1960, when the UC was first established. The 1960 California Master Plan, also known as the Donahue Act, was a piece of state legislation that created the California public university system as a tuition-free and merit-based system based on the principle of accessibility.

It wasn’t until the late 1960s when then-Governor Ronald Reagan began shifting funding away from the state and imposing a fee to be paid by the students. Meanwhile, the 1978 passage of Proposition 13, which drastically cut property taxes on homes and businesses by more than half, led to the loss of potential state revenue. With the loss of state revenue and the increased rate of state disinvestment from public universities, it was all but inevitable for tuition costs to go up considerably.

Teach-in organizers made sure to connect the state funding crisis to the national trend of increasing tuition costs. According to data found by teach-in organizers, the average cost of college tuition and fees have increased by around 827 percent since 1980, and the total amount of student debt in the U.S. has surpassed $1.3 trillion.

The status quo of policymakers and their decisions at the state and national levels has been a source of frustration for march organizers within the UC and across the country.

“I think that higher education has not been a priority in this country,” Student Advocate General and fourth year global studies and art double major Joseline Garcia said. “If you make it a priority, it’s definitely possible … [Our] education is a right. It’s not a commodity and should not be privatized.”

With the next Democratic presidential debate scheduled for Nov. 14, two days after the march, student organizers are determined to make the issue of college affordability a topic of serious discussion for the candidates. They also want to make the issue a part of the regular dialogue seen in Washington, where student organizers are deeply unsatisfied with the status quo on both sides of the political spectrum.

“I think it just really has to do with who Democrats have been in bed with traditionally,” fourth year global studies major and march organizer Brandon Yadegari said. “Now we’re starting to see maybe a new crop of Democrats, or people who are willing to identify as Democrats, that are kind of espousing these new ideals that students are really pushing for, more accessible education, more equitable education and better wages for students that are working on campuses.”

Yagedari also believes that similar detractors, who might not have as much of a vested interest in maintaining the status quo, have become understandably “jaded by the politics they’ve been seeing.”

In addition to the political and economic aspects of public university disinvestment and rising tuition costs, teach-in organizers made sure to address the social ramifications that come with the rising cost of a higher education. Most notably, the disparity between the amount the government spends on higher education and the amount spent on prisons.

“Socioeconomic status is one of the first barriers that’ll keep people from entering into the university,” Yadegari said.

Teach-in organizers discussed how the War on Drugs, since the early 1970s, played a role in expanding the prison system, leading to disproportionate rates of incarceration among communities of color, particularly African Americans.

“Socioeconomic status is one of the first barriers that’ll keep people from entering into the university,” Yadegari said. “But who then is the next layer that is affected? Who are people in this country that we know to be in communities that are systematically neglected? What do those people look like? Well, they’re mostly black and brown people.”

According to a research report by The Sentencing Project, “If current trends continue, one of every three black American males born today can expect to go to prison in his lifetime, as can one of every six Latino males — compared to one of every seventeen white males. Racial and ethnic disparities among women are less substantial than among men but remain prevalent.”

“Quite frankly,” Yadegari continued, “the longer we sit around and build up these barriers to keep these kids out of higher education, the longer we’re just perpetuating systems of racism, frankly, that are really akin to what we saw in the middle of the last century. And until we really start to see that be part of the conversation, I think we’re really trying to sweep that issue under the rug altogether.”

In the days leading up to the march, the Office of the Student Advocate has been working with students to help them understand their legal rights as student protestors. Additionally, the OSA has been working with the coalition to take safety precautions on the day of the march, including having police liaisons and marshals present at the event, according to Garcia.

“You can do everything to be prepared and make sure that everything goes well, but, at the end of the day, you can’t control people’s actions,” Garcia said. “So the Office of the Student Advocate is making sure that students are very well prepared for what’s to come. In case something does happen, they understand what their rights are, they understand what they can do and what they probably shouldn’t be doing at a certain time and place.”

Second year psychology major and march organizer Hannah Houska stressed the importance of just how personal the issue of college affordability can be to the average student.

“It directly affects you, and if not you, many of your peers around campus,” Houska said. “If we’re not talking about this issue, no one is talking about this issue. People don’t talk about it at dinner. People don’t talk about it with their friends. But why not? Because this is an issue that directly affects each and every one of us sitting here in some way.”

“I think it’s clear that students are passionate about this,” External Vice President for Statewide Affairs and fourth year sociology and Black studies double major Mohsin Mirza said. “When they learn the information, they’re angry about this. And then, just as importantly, they’re ready to act on this … This generation isn’t going to wait for [lawmakers] to deliver what we need. We need justice in our education system, we need affordability in our education system, but we’re going to come and take it.”

CORRECTION: An earlier version of this article referred to Ronald Reagan as “then-Governor” during the 1980s. The paragraph refers to a series of reforms undertaken during Reagan’s time as Governor of California from 1967-1975.