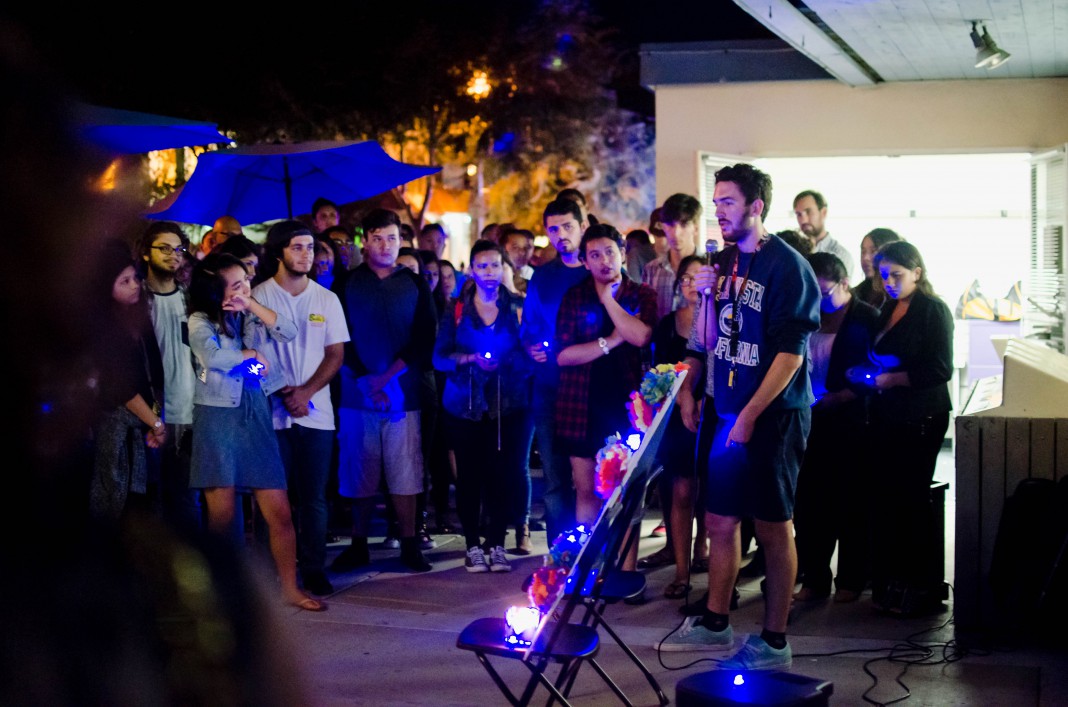 Basked in the radiant blue light of dozens of LED candles, friends and members of the University of California, Santa Barbara and Isla Vista community gathered at the Associated Students Pardall Center on the night of Thurs., Oct. 15 in remembrance of second year pre-biology major Andres Sanchez.

“It’s hard and heartbreaking to know that a young Latino brother of ours is not with us any more,” said third year Chican@ studies and history of public policy double major Alejandra Melgoza.

An initial witness the morning of Sanchez’s death, Melgoza offered some words about Andres and shared a few thoughts from his parents at the vigil.

“We talked to his mama and papa,” Melgoza said. “They want everyone to know that he was a loved young man. He loved sports, and we saw his smile — even in pictures, it’s such a beautiful, beautiful sight.”

For many in attendance, the vigil offered a sense of unity and provided closure for the loss of their close friend. While some did not have the opportunity to meet Sanchez, their attendance at the vigil reminded all attendees of the unbreakable spirit and Gaucho unity that will always provide support in times of need.

“Amidst this tragedy, this feels amazing,” said fifth year organizer Jocelin Hernandez. “I want to again stress the fact that we didn’t know Andy, and so I want to stress that this was a loss for all of us as members of the UCSB community.”

Throughout the vigil, students and community members shared stories of Sanchez, recounting tales of his friendly demeanor, positive attitude and boundless energy. Many took time to memorialize Sanchez and share the impact he had on their lives.

Second year Rosalea LeBlanc remembers Sanchez as a remarkable individual. Having met Sanchez while living in Santa Catalina Residence Hall last year, LeBlanc took time to reminisce on a night the two spent discussing “the Beatles and conspiracy theories,” and recalled her excitement when they shared ideas with each other.

“He makes you feel like you’re a valid person,” LeBlanc said. “He really appreciated everything you would say. His eyes would light up and make you feel really legitimate.”

First year UCSB student Rafael Smith remembered Sanchez as a promising athlete and someone he looked up to. Having played football together in high school, Smith shared memories of Sanchez as someone who would “always have [his] back.”

“Having been a year younger than him and most of the team at the time,” Smith said, “I was always looking for someone to look up to. Andy was always someone who would be there for me and I knew that every time I went on the field, he’d have my back.”

Smith looked up to Sanchez both on and off the field, admiring the work ethic he put into his advanced placement classes. Having turned to him for help in a difficult class, Smith recalls the relative ease Sanchez had with the same class.

“I looked at Andy and said ‘Andy, I don’t know how to do anything,’” Smith said. “[Andy] looked at me and said, ‘Dude, that class is easy! What are you talking about? You’re gonna do fine, you’re gonna do great.’”

Despite only having known him for a month, Jose Romero — Sanchez’s supervisor at work — remembers the impression he made on him.

“He was happy, ambitious, curious and conscientious,” Romero said. “I saw those things within five minutes of meeting this kid — he made me feel good, like I can’t live without this kid next to me.”

According to Romero, Sanchez chose to attend UCSB to be closer to the ocean and pursue his dream of becoming a marine biologist. When Sanchez failed to show up for a shift, Romero recalled being disappointed and hurt. Despite a call to Sanchez, Romero ultimately terminated his employment after he failed to show up twice more.

“I didn’t know what to do,” Romero said. “I gave [his father] a hug. He didn’t even cry, he was standing tall and strong. The moment that it hurt me even more was when he said he came here to notify the school, notify us and to pick up his body. That really, really hurt. I went to the back and I broke down — I couldn’t hold it in anymore. I’m going to miss him even though I only knew him for that short time. I’m going to miss him.”

Second year Jamie Burkes shared words regarding the difficulty she had learning of Sanchez’s passing.

“It’s so impossible to wrap my head around the fact that he’s gone,” Burkes said. “Today I saw someone on the bike path and I swore to god it was him. It’s unreal, you know.”

Burkes remembers Sanchez as “someone who will change the way you wake up in the morning”, and commented on his unique personality and positive demeanor.

“You never know what you’ve got until it’s gone,” said Burkes. “I know he’s constantly with us and I know that he’ll always, always be here — and that’s so special.”

In Construction: Will the Interactive Learning Pavilion Aid the Enrollment Crisis?