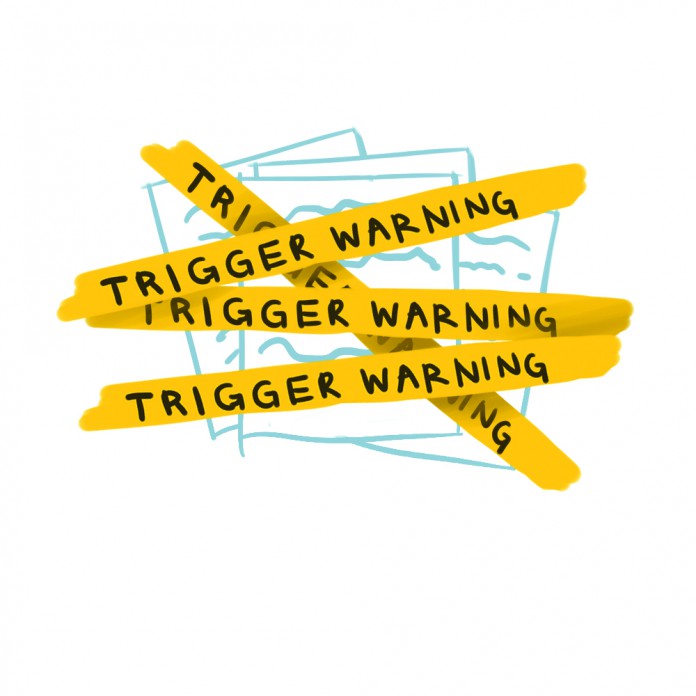 Recently, many prominent figures have been firing shots at trigger warnings and the oversensitivity of college students as a whole. President Obama has said that hypersensitivity “coddles” the minds of students. Jerry Seinfeld and other famous comedians have even taken their stance by outright blacklisting college campuses. And while they may have a point about censorship as a whole, trigger warnings definitely avoid the shortcomings they forewarn.

One of the major mistakes made by critics of trigger warnings is that they conflate them with censorship. The two may be similar in intention, but they are distinctly different. A trigger warning is generally defined as a warning placed at the beginning of a piece which has material that may be deemed disturbing. While censorship would completely eliminate said piece, a trigger warning would only let one know about forthcoming explicit content. This means that the piece would remain completely intact, even after a warning. Despite this glaring distinction, however, the critics will still bundle trigger warnings under censorship and fallaciously offer their generic censorship arguments.

Mind you, it wouldn’t be unprecedented to add a warning prior to explicit or obscene content. It’s done in the media all the time (and to no one’s expense, I may add). Take, for instance, Jimmy Fallon’s brilliant execution of this concept. After suffering from ring avulsion, Fallon shared his blunder on television in order to excuse his absence. Instead of blindsiding his viewers with a graphic image of a finger being snapped off by a ring, Fallon cleverly instructed his audience to “Google it” at their own discretion. I would consider what Fallon did to be much more extreme than a trigger warning (as it completely removed the image from the programming), but it definitely wasn’t to the detriment of his viewers.

This example demonstrates one of the benefits of a simple trigger warning: offering solace to the listeners. As we know, both Fallon and professors rely on listeners or students who return week after week, in order to stay afloat. Surprising listeners or students with explicit content can reduce participation, whether it manifests itself in viewership or in the case of the classroom lecture attendance and verbal participation. Alternatively, offering these warnings to students will make them feel safe will encourage them to participate in lecture and section. I would contend that the “trigger warning movement” is directly in line with what we all look for in a classroom: a comfortable learning environment where we can feel free to be ourselves.

Another, more canonical example of where trigger warnings would be greatly beneficial in a classroom setting is Othello. And while most of us read this play in high school, it still offers great insight on why trigger warnings can be important.

Race and racial identity have always been a defining issue for students. In light of recent events, these issues have transformed into tremendously tense topics of debate. Othello and his interactions with other Venetians engender feelings of self-hatred within him, and these interactions are something that some of us students know all so well.

A tremendous number of students, especially at the pivotal moments of our lives, suffer from depression, just as Othello does in the play. His murder-suicide in the final act of the play is downright disturbing for the typical student, but to students who have contemplated suicide, it’s too close to home. When you view trigger warnings through this lens, it’s almost obvious that we should give these students some type of warning, but we often choose overlook these students under the guise of “freedom of speech.”

Now, I’m not advocating school-wide legislation demanding trigger warnings in all classes, as it would trivialize the issue. But we should definitely consider integrating some type of warning prior to presenting disturbing content, like mentioning the content in question in the title of the presentation or offering a small warning directly prior to explaining the material in class.

An unobtrusive warning can go a long way toward making students feel at ease, which, when you evaluate the bigger picture, far outweighs the minor inconvenience experienced when a professor changes the title of a slide.