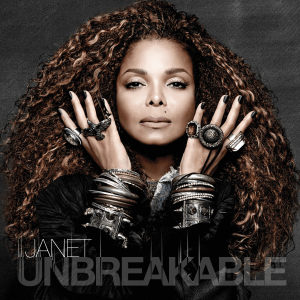 As the women who were once considered her contemporaries (Madonna, Mariah), and even those deemed her successors (Brandy, Britney), fade from relevancy despite spirited effort, Janet Jackson strolls into a studio, whispers sultry sweet nothings (notably a certain hush sound) into a microphone, turns it into an album, and outdoes all aforementioned artists with ease.

Only Unbreakable is more than just sultry whispers — it’s her first album in seven (long) years, and the first since the death of her brother Michael, whose presence is felt more in this album than in any of her previous works. Unbreakable sees Janet (Ms. Jackson if you nasty) working once again with her long time collaborators: James “Jimmy Jam” Harris III and Terry Lewis. The trio releases yet another accomplished product that encompasses her eclectic style and spirit, only matured and more modern.

The album starts with some uplifting tracks. The title track “Unbreakable” is first — a mid-tempo track in which Janet talks directly to her fans. Assisted by rapper Missy Elliot, Janet then immediately jumps into “Burnitup!,”  a fast-paced dance track with both women seeming to be in their natural elements and a song that is (excuse the pun) lit. The track is appropriately followed by another dance track: the groovy, Mustard-esque “Dammn Baby.”

Up next is a standout track, “The Great Forever” — a hard track, juxtaposed with an unusual, mellow mid-song breakdown. Throughout her career, Janet’s been clear of the fact that she is the person in charge, and this song is a reminder of just that. Stating frankly, “Living my life/ The way that I hope/ Is leading me to/ The great forever.” I don’t know what it means, but I believe her. Listening to this track makes it clear why the album is titled “Unbreakable.”

The next track, “Shoulda Known Better,” falls short with lyrics that are sincere, but forced. It doesn’t help that it’s sandwiched between two of the strongest tracks on the album.

“After You Fall” is a song that touches the rawest nerves and deepest emotions of the listener, assisted with a haunting piano track.  “Broken Hearts Heal” is an equally emotional lyrical gem. A song about her deceased brother, in which she reflects fondly upon their childhood memories, this is perhaps why the track sounds reminiscent of some of Michael’s early work. With this track she comes to term with his passing and looks forward to reuniting with him in a different world

After venting, Janet immediately gets back to her groove, visiting familiar grounds in tracks like “Night,” “Dreammaker,” and the albums lead single, “No Sleeep” (three versions appear on the album, one with J. Cole). The songs are good, and Janet gets back to her optimistic lyrics and cooing, but by the time we reach “2 Be Loved” and “Take Me Away,” the songs get repetitive.

The track “Promise” is, well, promising — a Caribbean-tinged, Sade-like track. Unfortunately it’s only an interlude before getting back to the repetitive track, “Lessons Learned.”

Unfortunately, the next track “Black Eagle” is not a sequel to “Black Cat,” her experimental 1990 rock song. Fortunately, it’s a good song; in fact it’s another standout on the album, with simple but commendable production.  On “Well Travelled,” she reflects on her journey, including her career, her hiatus and her marriage. On this anthemic track she seems less like an R&B trailblazer and more like a wandering gypsy. Janet concludes the album with “Gon’B Alright,” signing off in style. The song, inspired by her gospel roots, is a bold finisher to a bold album, complete with a thank you message for her fans, the people who inspired the album.

This album is not a new Velvet Rope or Control, but then again this isn’t the same Janet that made those albums. She’s grown less aggressive and more relaxed and mature. In an effort that is seemingly coming full circle, she draws inspiration from artists who she has inspired, like Frank Ocean and The Weeknd. Unlike her contemporaries, she isn’t trying to relive the glory days, but instead is trying to move forward and keep the conversation going while at times dabbling with nostalgia. Overall, despite being congested with 18 tracks, a rejuvenated Janet delivers a solid album.