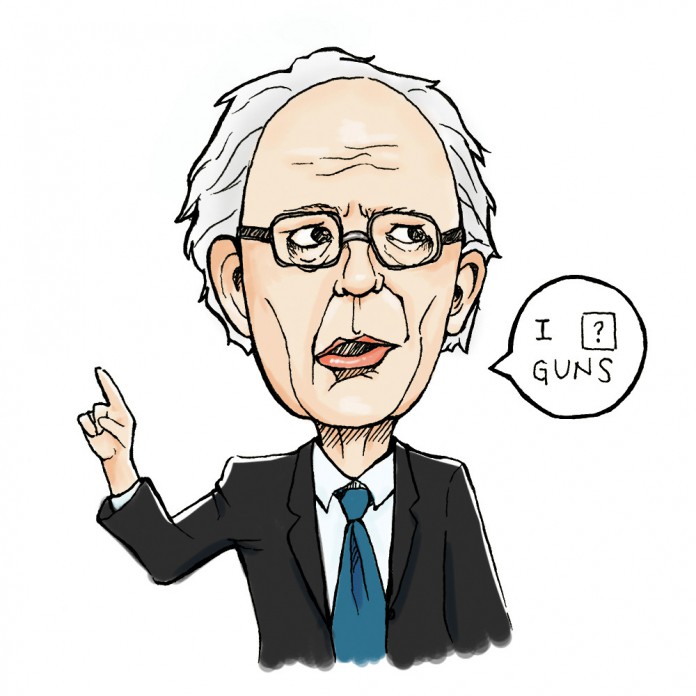 2015 has thus far been one of those magical years for Bernie Sanders.

The senator of Vermont was considered little more than an old, crippled-by-idealism socialist less than 12 months ago. At the time, the Democratic Party was gearing itself to place uniform support behind former Secretary of State Hillary Clinton for the 2016 presidency. Since then, Sanders’ grassroots campaign has charged him up the ranks of the race, and in that time he’s become championed by the American left wing as a man with the right convictions. In a country where the word “socialist” was once deemed something of a pejorative, the seventy-four-year-old senator may be a legitimate threat to Clinton for the Democratic nomination.

The distinction between Sanders and the other Democratic front-runners on the liberal spectrum is an important one: he stands further to the left than the other candidates on almost all issues. It’s ironic, then, that the one issue on which he would not appeal to the radical liberals of the country could also be the one that stumps his innocent climb up the mountain.

Sanders aside, the year 2015 has also notably been a continuation of a most tumultuous time for gun violence. The number of newsworthy gun-related incidents in the past six months alone are more than most would care to count, and the recent school shooting at Umpqua Community College in Oregon is fresh on everyone’s minds.

Former Secretary Clinton and Maryland Governor Martin O’Malley (another candidate for the Democratic nomination) have been swift in their proposals for gun reform, as reported by NPR last week. Among the changes proposed by O’Malley are a strict ban on assault weapons and a minimum age requirement of 21 to purchase a handgun. Clinton is similarly unequivocal in her push for reform, hoping, as president, to restrict the loophole of gun shows and the sale of weapons on the internet.

But Sanders doesn’t share such a leftist viewpoint. Though he’s signed in favor of background checks for gun owners, he has stated, according to CNN, that he would like to “bring us to the middle” of the gun issue. He’s pushed for the debate to be recognized more as a states’ issue than a national one. And on Real Time with Bill Maher last year, he employed the defense that the topic of guns is more of a mental health problem.

As the media begins to raise red flags around Sanders’ stance, the logical question looms on the flagpoles: How will the left respond?

Liberals are quick to criticize otherwise moderate Republicans for being pulled further to the right by the most conservative factions of the GOP. To then turn around and demand the same from Sanders doesn’t do much to far remove the Democratic Party from such divisiveness.

Then again, the subject of guns is one on which the left is pushing with an alarming amount of fervor. The factor of human lives might be too unshakable for Sanders not to reconsider his position — at least, not without being effectively cornered during the Democratic debates.

But at what cost? For someone who is deemed too liberal — and by some, not electable, as a consequence — it would seem to be in the best interest for Sanders to advocate for a happy medium between the two sides of the issue. Unfortunately, the subject of guns seems to be approaching an area where there is no longer much point in discussion, let alone a search for common ground.

Every time a tragic event, like the one in Umpqua, occurs, people waste no time with the proceedings — there’s the initial shock of the tragedy, followed by an emotional appeal for a weapons ban. Then, the tired arguments are tried again, buzzwords like “mental health” are kicked around, and finally the dust settles as the horrific event fades to the realm of old news.

Perhaps any suggestion that the left wing let Sanders off the hook for his stance is also old news. As this is being written, the senator is edging leftward, having indirectly hinted support for a semi-automatic weapons ban on Sunday. And as the Democratic debates begin this week, the only real loser in the race may be the hope for reconciliation between opposing views.