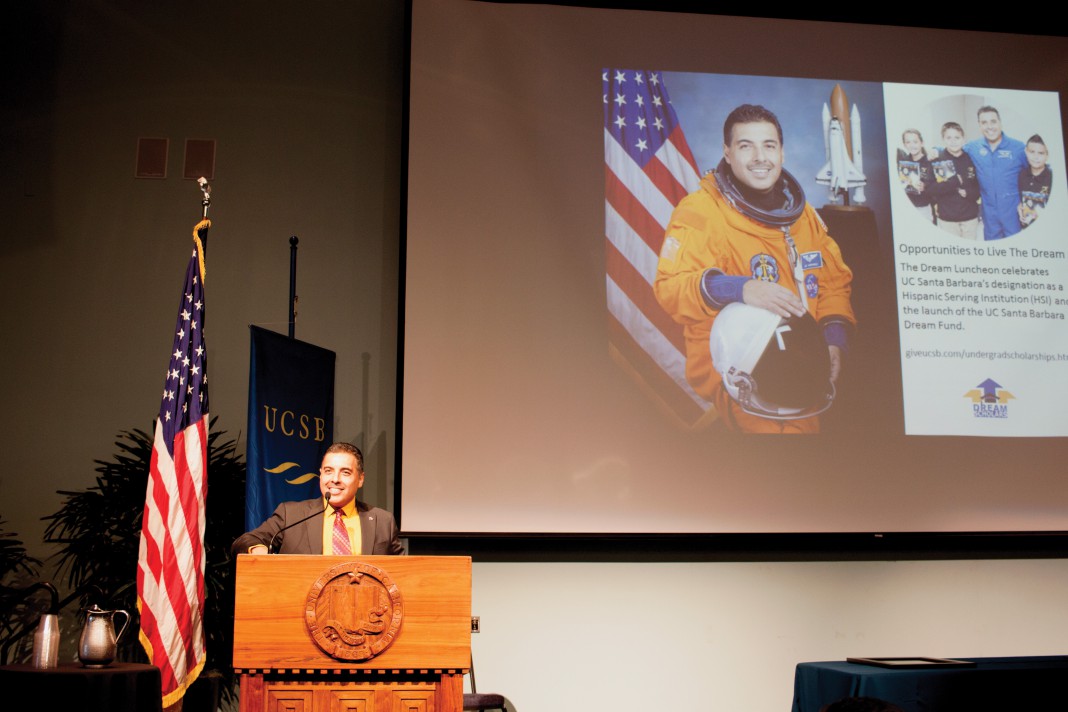 This past Sat. Oct. 24, engineer and former NASA astronaut José Hernández received the University of California, Santa Barbara Distinguished Alumni Award from the UCSB Alumni Association at a ceremonial lunch. The lunch was not only celebrating Hernández and his achievements, but also the achievements of UCSB as a whole, for recently being recognized as a Hispanic-Serving Institution by the Hispanic Association of Colleges & Universities.

UCSB is the only HSI that is also a part of the very prestigious Association of American Universities. To become an HSI, a University has to have at least 25 percent Hispanic students enrolled, as a minimum. This was a great accomplishment for UCSB, and Hernández only added to the pride UCSB has for its diverse student body.

Hernández was born in French Camp, Calif., but was raised in what he considers his home in Stockton, Calif. He was one of four children in a family of migrant farm workers.

His family was part of what he describes as the “California Circuit.” Every year they would travel throughout California picking fruits and vegetables, until the end of the fall season when they would go back to Mexico until Spring began. He went to school and worked in the fields simultaneously.

This, of course, was an unsuitable environment for obtaining a proper education. Ms. Young, one of his childhood teachers, came to his house one day and told his parents about the barriers their nomadic lifestyle presented for their childrens’ educational aspirations. Her advice would later shape his parents decision to settle down.

Hernández was 10 years old in 1972 when he decided to become an astronaut. On television, he witnessed Apollo 17, the very last of the Apollo Missions, and as he watched Eugene Cernan walk on the moon he thought to himself, “Wow, this is what I want to be. I want to be an astronaut.”

Hernández says that the best thing he could’ve done that day was to share that dream with his father. He told his father he wanted to be an astronaut and his father told him, “I think you can do it. As a matter of fact, I’m going to give you a recipe, [and] if you follow it, I guarantee you can be what you want to be.” Hernández followed his father’s recipe for success as he continued his path to becoming an astronaut. He received his B.S. Degree in electrical engineering from the University of the Pacific in 1984 and later received his M.S. Degree in electrical and computer engineering from UCSB in 1986.

Over the course of twelve years, Hernández applied to the NASA program twelve times. By his sixth time applying, Hernández became frustrated, but instead of quitting he asked himself, “What do the [applicants] that are being accepted have that I don’t have?”

He noticed that those who were being accepted had training as pilots and scuba divers. He became a pilot and a scuba diver. He constantly worked to “differentiate himself in a positive way” so that “it was clear that he was the most qualified candidate.” He was finally accepted his twelfth time applying and became a part of the nineteenth class of NASA astronauts. Hernández recognized the positive aid UCSB programs provide to its students, but noted that it is ultimately up to an individual to accomplish his or her goals.

Hernández was not the only speaker of the day. There was also Bill Villa, a former UC Santa Barbara Director of Admissions who helped in UCSB’s process to become a more diverse campus. Also in attendance was Carl Gutiérrez-Jones, English professor and acting dean of undergraduate students who took the place of Chancellor Yang in honoring Hernández. The final speaker before Hernández was one of his friends, Antonio “Tony” Cardenas, who graduated the same year Hernández did. He obtained his engineering degree from UCSB and is currently a congressman.