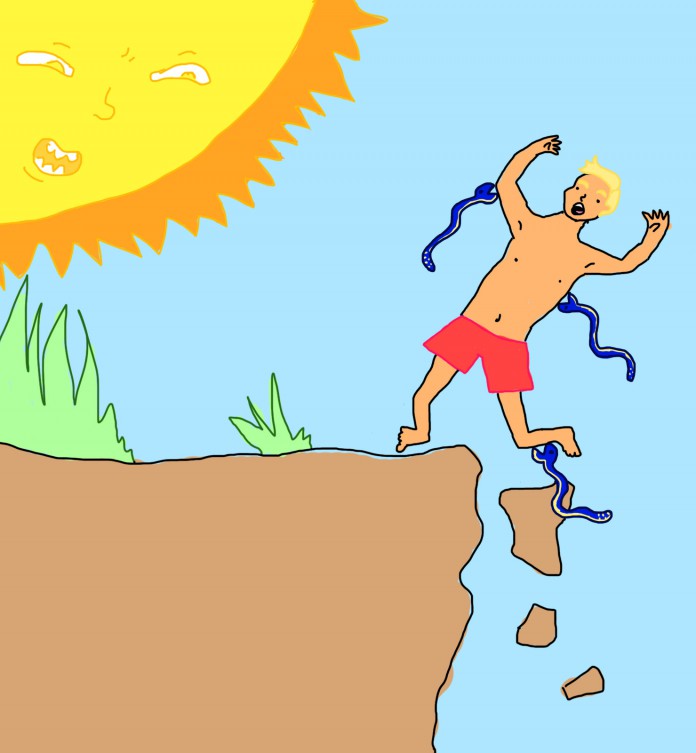 Recent studies have suggested this winter’s upcoming El Niño event could be the largest ever witnessed. If this is true, sea snakes on the beach, crazy thunderstorms and rapid cliff erosion may be just the beginning.

“This definitely has the potential of being the Godzilla El Niño,” Bill Patzert, a climatologist with NASA’s Jet Propulsion Laboratory, told the Los Angeles Times.

El Niño occurs when there has been a prolonged warming of the sea surface in the Pacific Ocean, leading to temporary global changes of temperature and rainfall. In Australia and Indonesia, this usually leads to drought. In California, El Niño often causes heavy rainfall and potential flooding.

“We’re predicting that this El Niño could be among the strongest El Niños on record, dating back to 1950,” Mike Halpert, deputy director of the National Oceanic Atmospheric Administration’s Climate Prediction Center, told CBC News.

This raises several concerns for the Isla Vista community.

The extreme drought plaguing the state for the past four years was reported by Governor Jerry Brown to be one of the most severe on record. The lack of rain and moisture means the soil becomes very dry and poorly absorbent. This leads to extensive water runoff, massively increasing the risk of flooding and flash flooding.

The County of Santa Barbara has provided a range of locations for residents to acquire sandbags to protect their properties from flooding. Sandbags will be available in select locations throughout the county and until April 2016 in the City of Santa Barbara. More information can be found concerning this service from the County Public Works website.

While El Niño will exacerbate the risk of flooding, the drought will make the situation even worse. Intense storms are dangerous at the best of times, especially on California’s landscape that isn’t equipped to deal with heavy rainfall. However, the current drought means the soil will absorb even less water than it would ordinarily.

Arguably, the biggest concern for the Isla Vista community is the bluff erosion. Waves can carve up to a foot a year from the seaside cliffs in Santa Barbara County, according to a New York Times report.

This has already posed dangers to residents, especially those living along Del Playa Drive. Mark Juergensmeyer told the Santa Barbara Independent last month that he has lost 20 feet of property over the past 20 years because of cliff erosion.

There are many processes contributing to coastal erosion, but with El Niño on the way, it is the strength and height of the waves residents need to be worrying about.

Cliff erosion can be attributed to a combination of wave action, rainwater, corrosion from acids in the seawater, rocks and other sediments hitting the cliff face and vegetation. El Niño will cause an increase of winds and storms, as well as a temporary rise in sea level. All three of these elements will strengthen the force and speed of the waves, meaning erosion will occur much more rapidly.

Santa Barbara County officials concluded back in the 1980s and 1990s that seawalls would be ineffective at combating cliff erosion, according to the New York Times. The National Oceanic and Atmospheric Administration has already suggested implementing managed retreat. This entails demolishing or relocating infrastructure that is in severe danger of erosion and allowing the cliffs to erode as they would naturally.

“Coastal managers realize that in many situations attempting to stop erosion through structural or non-structural solutions is a losing battle,” the National Oceanic and Atmospheric Administration reported. “Shoreline protection efforts and/or their repeated maintenance would be too costly and ultimately ineffective at preventing further erosion.”

Considering the massive overcrowding in Isla Vista and the way houses are stacked up on the edge of the cliff, this could be very problematic in the near future. At the moment, county staff are completing regular inspections of the cliffs and are allowing the modification of properties along Del Playa Drive. However, stricter measures might be put in place if El Niño is as large as it is predicted to be and the residents of Isla Vista are suspected to be in danger.

More information about county preparation for the upcoming El Niño event can be found at the County of Santa Barbara webpage: http://www.countyofsb.org