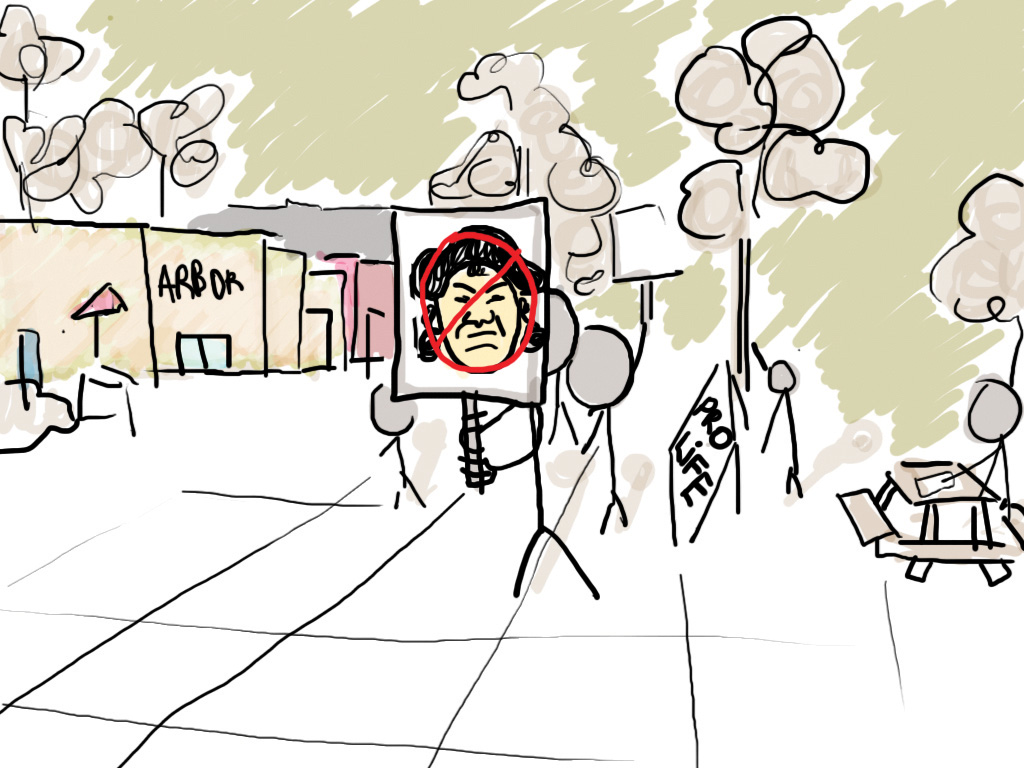 We UCSB students take pride in attending such a diverse school — but part of attending one involves being confronted with opinions that differ very widely from our own. That said, we should be able to walk across campus without the fear of being harassed by people who take their protests too far. We should not have to constantly be on guard against people screaming in our faces when we ask them to leave us alone, and forcing us to look at graphic, gory and potentially triggering images, especially in a place that’s supposed to be our home.

The First Amendment to the U.S. Constitution guarantees the right to freedom of religion, expression and assembly, as well as the right to petition and peacefully assemble. But the burden of freedom of speech is that as much as we are allowed to express ourselves as we see fit, so is everyone else.

We have to respect other people’s rights to their own freedom of expression, no matter how radically their views differ from our own, no matter how wrong their claims seem to us, because this is what it means to have freedom of speech at all. The alternative would be a single person or group of people dictating what everyone can and cannot say, and history can tell you why that is a terrible idea.

As much as their presence displeases us, those protesters at the Arbor who promote such graphic images and crude messages do, in fact, have a right to be here. We have no right to force them to leave on the grounds that we don’t agree with what they have to say. In order to avoid falling into this trap, we need remember why we’re upset in the first place — we’re upset because we’ve been forced to look at such horribly graphic images in a place that is supposed to be our home, not because people are protesting in favor of the pro-life movement. We’re upset because protesters refuse to back off when we ask them to leave us alone, not because they’re expressing opinions that differ from our own.

We don’t have the right to dictate what people can and cannot say in their protests, but we can place limits on their methods. All organizations on and off campus that wish to protest at the Arbor should be forced to adhere to a set of regulations. For example, protesters should have to maintain a certain physical distance from the people they interact with, so that students and faculty won’t feel overwhelmed. If someone requests that the protesters leave them alone, the protesters must comply without argument, instead of pressing forward with their argument while assuming that the people they’re interacting with are simply closed-minded. All materials that the protesters wish to distribute should be pre-approved by a committee whose members have diverse political and social opinions.

Everyone has the right to their own opinion, but forcing your own opinions on someone else crosses a line. As an institution, UCSB needs to be open and tolerant toward all viewpoints, but it isn’t unreasonable to expect advocates of a certain controversial stance to treat the people they’re addressing with courtesy and respect. The problem isn’t the stance certain protesters take on controversial issues — the problem is how they promote that stance.