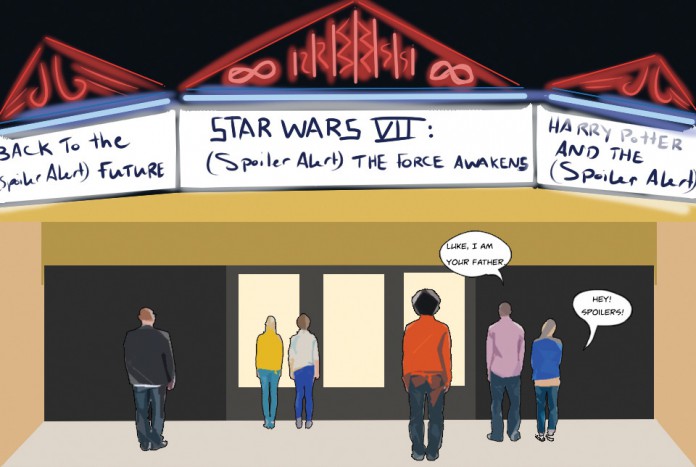 Putting a spoiler disclaimer before talking about a movie, TV show or game has become common practice in order to warn people that the following content might reveal major details that the people may not know. But the idea of spoilers is more prevalent now than ever before.

Director J.J. Abrams is taking extra precautions to avoid having parts of Star Wars Episode VII: The Force Awakens leaked. Abrams is too familiar with spoilers, especially after Benedict Cumberbatch’s character was exposed prior to the release of Star Trek: Into Darkness. Cumberbatch’s identity was supposed to remain a secret in hopes of shocking the audience when his character was revealed.

What these spoilers do is change the experience for the audience, causing viewers to enter the theater with a preconceived notion of what is going to happen in the film. This derails the momentum a lot of films try to build leading up to the climax or surprise. In a sense, it’s robbing the audience of a whole experience.

Some people have taken great measures to avoid spoilers by avoiding certain websites. On Tumblr, users are able to post content with tags pertaining to the subject. If you see a post with the latest episode of a show, you may see “[TV show] spoilers” in the tags. Users put this so that others who see the content are able to avoid the post and avoid having the latest episode spoiled.

It’s arguable that the idea of spoilers surfaced heavily with the release of the sixth Harry Potter book, The Half-Blood Prince, which hit stores on July 16, 2005. Toward the end of the book, Severus Snape kills Albus Dumbledore — a big shock to Harry Potter fans. Many people scanned the page of the book containing the details and posted it online for the whole world to see. What made this a major spoiler was that a few copies of the book were released before the release date, leaving fans in confusion and anticipation until the official release. Whether people wanted to know or not, pretty soon it was common knowledge that Snape kills Dumbledore.

A long time running TV show, Doctor Who, has an overarching theme revolving around the idea of spoilers. River Song, a person from the Doctor’s future, refuses to share details about the Doctor’s future. She reminds him every time he asks by saying, “Spoilers.” She refuses to divulge an important part of his life that he has not yet gotten to. The episode in which this was first used aired in 2008.

Either way spoilers and spoiler warnings are a big part of today’s culture. Whether you enjoy them or not, they will be here to stay for a while.