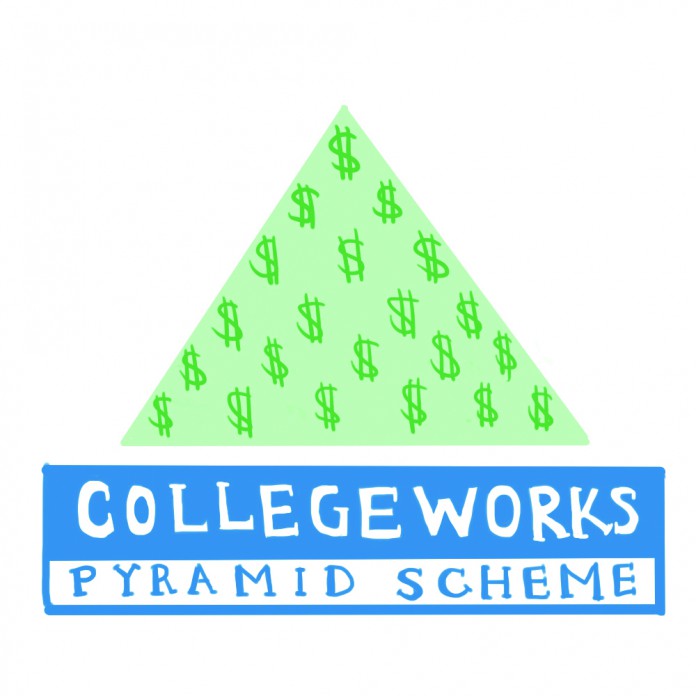 As I sat down in the Theater and Dance lecture hall on campus preparing to tune in to my first lecture of the quarter, an incident reminded me of a pyramid scheme called Vemma that corrupted some classmates of mine back in high school; within one day of joining the company, some of my peers had converted their entire personalities and social media presences into Vemma advertisements, hoping to convince fellow students to join.
Standing at the front of the hall was a representative for a company named College Works Painting. He had asked the professor if he could make a quick announcement to the students before the start of lecture. The professor, just as clueless as we students were with regard to the announcement, allowed the representative to speak.

What followed were a few empty sentences about an internship and “great” opportunities. The vagueness of the pitch, coupled with the fact that it was being advertised to over 100 totally random students, made it apparent to me, having heard the same mumbo jumbo from Vemma four years ago, that the “internship” in question was a sham.

Just this year, the Federal Trade Commission (FTC) decided to take action against Vemma, a self-described “privately held multi-level marketing company,” after the commission decided that the company’s business practices were those of an illegal pyramid scheme. While the company’s tactics were unsustainable, as are those in all traditional pyramid schemes, it still made away with over $200 million in each of the 2013 and 2014 fiscal years and operated without great legal trouble for over a decade.

A pyramid scheme is an unsustainable business model which promises to pay employees for signing up others. Rather than producing some product or performing some service, companies which employ a pyramid scheme will make profits predominantly from the “joining fees” they receive from new employees.

To put their practices bluntly, pyramid schemes attempt to lure potential employees through a barrage of very generic, corporate-sounding statistics, hog-wash charts and graphs outlining potential earnings for newcomers, as well as the testimonies of other employees who laud the company and their job, all while actually aiming to take the joining fee from the pockets of the potential employees.

While College Works Painting is different from a pyramid scheme in the sense that it does not have a joining fee, it does operate on a multi-level-marketing strategy, as evidenced by a statement on the College Works website: “The more money an intern makes, the more money we make.”  What this means is that the College Works management profits from the cut it takes out of the work done by its interns.   The company itself is essentially a door-to-door sales pitch job. Students who join the company work under a “student manager,” or a mentor, who essentially tells the intern how to run a door to door painting business.

The company specializes in painting homes using its student interns to pay for the supplies, paint and workers, while taking half of the money earned by that student and distributing it disproportionately to higher- and lower-end workers.

On the College Works Painting website, there is a chart with an estimated earning potential for student interns, with the lowest projected income, bracketed under a category called “Below Average Branch,” listed at $4900. The only issue here is that the chart makes no mention of number of hours worked, amount spent on supplies, etc. Despite their appearance, these estimated earnings say almost nothing at all to a prospective intern.

Scammers in all fields are those who you least expect. They approach you with a smile, make you feel cozy and comfortable and will proceed to take from you what they want without batting an eye. That said, it is completely up to each student to join College Works Painting, which continues to have a presence at UCSB and campuses all over the state; my only recommendation is that the student visits the website for a good laugh.