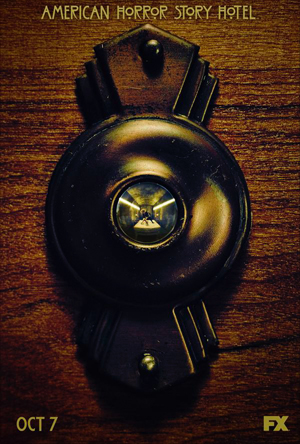 The popular anthology series American Horror Story has returned for its fifth season subtitled Hotel. As the name suggests, the show chronicles a mysterious, old Hollywood hotel and its uncanny inhabitants in what seems to be a promising premise.

Hotel maintains the essence of the series, overloaded with sex, gore, and appropriate corniness (they play The Eagles’ ‘Hotel California’), but continues to push the envelope. This show should come with multiple trigger warnings; it is not a show for the fainthearted.

The season immediately grasps the viewers’ attention with its lavish set design. Hotel Cortez is built elaborately, and emits a haunting atmosphere. This is in part because of its aged aesthetic, but also because of its undead residents and a particularly menacing group of bloodthirsty children. The characters of the show fit perfectly within the hotel, almost as an extension of the hotel’s character. The array of strange beings are as ornately decorated as the hotel itself and would seem like caricatures had it not been for the sincerity of the cast.

The first cast member to be introduced is Iris, played by Kathy Bates, the hotel’s inhospitable manager who despises the hotel but cannot leave. Another AHS favorite, Sarah Paulson, returns as Hypodermic Sally, one of the most richly constructed characters, a heroin addict who enjoys torturing the hotel’s guests for pleasure as proven by a particularly savage rape scene involving a monster with a screw-on-drill-dildo working presumably under her control. Denis O’Hare plays Liz Taylor in a subtle performance that makes Liz Taylor the most somber character on the show, despite her opulent exterior.

Other series regulars like Evan Peters and Angela Basset are yet to be introduced. The new cast members fit right in as well, notably Wes Bentley as the troubled but earnest cop John Lowe, whose search for a serial killer leads him to the hotel. Chloë Sevigny is underused in the first episode as Lowe’s wife Alex; hopefully the writers utilize her talents later on in the season.

The most notable addition to the show, though, is pop star and the Mother Monster herself: Lady Gaga. Gaga plays a character known just as “The Countess,” the hotel’s enigmatic Tiffany-twisted owner and protagonist (or antagonist?) of the series, who is introduced about thirty minutes into the episode.

The Countess and her lover, Donovan (played by Matt Bomer, who is equally vicious), live a most unusual life. They attend outdoor film screenings (they watch Noseferatu, a possible inspiration for the series) in extravagant clothing that can only be described as vampire couture. At these excursions, they seduce other couples into returning with them to their hotel for coitus, not a particularly difficult task considering they’re some of the world’s most beautiful people. They then proceed to cut the throats of their sexual partners and suck their blood, in what is possibly the goriest foursome in television history. The nature of their existence is unclear, they could be vampires, cannibals, or something entirely different.

Gaga has big shoes to fill, as she replaces the original AHS leading vixen Jessica Lange. Lange was undoubtedly excellent in each of her AHS avatars, and her presence is missed in this season (hopefully a guest appearance is in the works), but the new leading lady isn’t one to ignore. Gaga makes her presence heard in each of her scenes — she is particularly terrifying in the scenes with her children, displaying a sense of maternity in the most twisted sense.

Overall, American Horror Story: Hotel shows great potential. The writing is commendable, with captivating subplots and a brilliant cast to present it. It was slow at first, but the upcoming episodes seem faster paced. Hotel is a blend of Asylum’s psychological intricacy, with the panache of Coven, some old school Hollywood glamour, topped off with the bloodiness of a slasher flick. If you can handle the material, this show should definitely be on your to watch list. Ryan Murphy and his team of writers seem to have delivered another hit show.