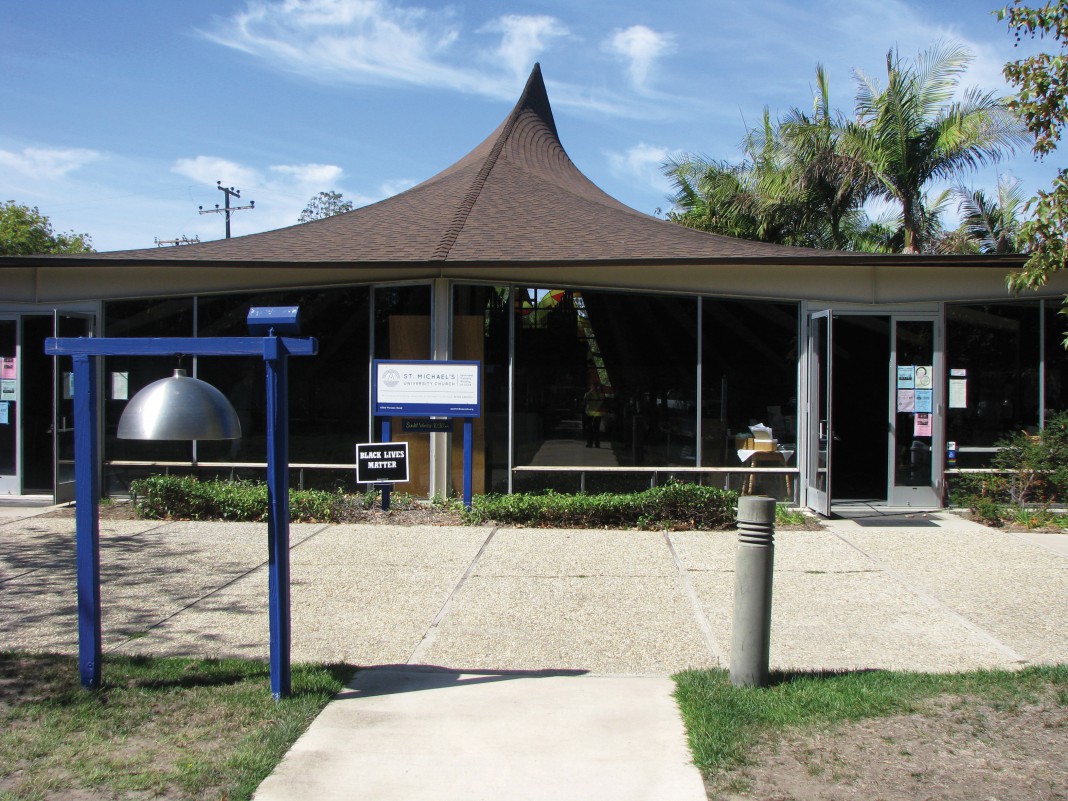 St. Michael’s University Church members are still puzzled as to who and why someone would vandalize the property. On Sunday, Sept. 10, Rev. Nicole Janelle, the church vicar at the time, was informed by a sheriff’s deputy of possible gunshot damage to the church’s window and door, according to a church press release.

“[The vandalism] happened within a couple of weeks of us beginning to post Black Lives Matter [signs],” Bishop’s Warden Kathleen Moore said, “We also put a rainbow flag up on the corner [of] El Greco and Camino Pescadero. The thought is that it’s vandalism related to our signage.”

There is a history of people taking down and stomping on the signs displayed at the church, but never before has there been an act of vandalism of this magnitude, according to Moore.

“We wanted to be a place that declared our solidarity with the BLM movement,” Moore said. “It’s definitely stirred up some resentment. We’re a campus ministry as well; we want to be a safe place for students.”

Lillian Palermo, a member of the Bishop’s Advisory Committee said that “it might be a good idea…to try to open a dialogue with the surrounding community and ask them to express their feelings about this, instead of pushing [their feelings] down.”

Moore also shared her opinion on the social reaction to the BLM movement, and why it’s important to reflect on it.

“I think that the responses that people have to the BLM movement are something we need explore further in general,” she said. “I’m surprised at the amount of anger that comes up from people when they see that. There were members of our own congregation that said ‘All Lives Matter.’ That prompted a dialogue that said that’s true, all lives matter, but right now it’s black lives — they’re under siege.”

“It seems to me, possibly, what we’re beginning to see is a little microcosm of what’s going on in our society today,” Palermo said. “I’ve been a little bit surprised that this kind of prejudice is rearing its head again. It’s like it was under cover, and all it took was something to flare it up and to come into the public eye.”

As of press time, there is no new information related to the crime, according Santa Barbara County Sheriff’s Office Public Information Officer Kelly Hoover.

“There was no evidence that would indicate who was responsible,” Hoover said. “We would encourage anyone who has information that would assist sheriff’s deputies in this case to call our anonymous tip line. There’s a high probability that somebody saw something or knows something that would help us.”

“You know, you’re talking to two white church ladies here,” Moore said, chuckling. “We don’t really represent the breadth of the diversity in our church. [However], in my life as a single mom with a black male 18-year-old [son], it’s really hard for me to find places where I feel like I can talk about what’s on my mind and how much I worry about law enforcement and my son.”

If you have any information that may help the investigation, you can call the sheriff’s anonymous tip line at (805) 681-4171.