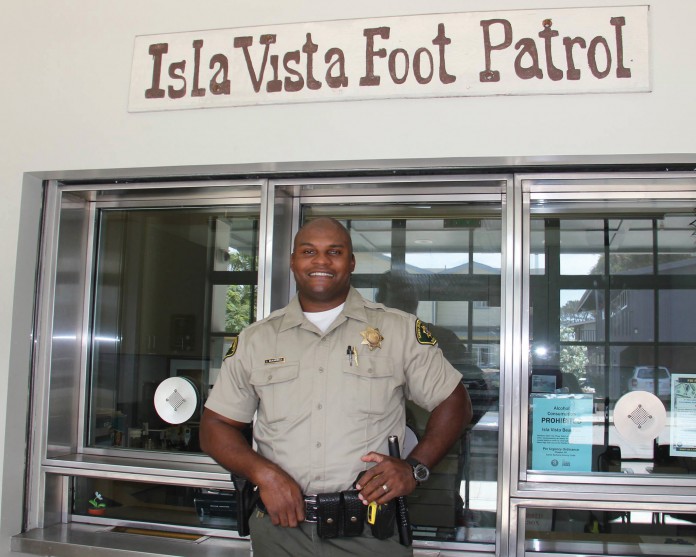 On June 2015, the Santa Barbara County Board of Supervisors approved the funding of a Community Resource Deputy (CRD) in order to address grievances regarding the relationship between the unincorporated territory of Isla Vista and the local police force.

After two months of searching for a qualified candidate, Sr. Deputy James McKarrell was chosen to spearhead the new position, and to build a stronger bridge between community members and law enforcement.

Sr. Deputy McKarrell sat down with The Bottom Line to explain what his position entails and what he hopes to accomplish during his tenure.

I’d like to begin with getting to know a bit about you, like where you are from and what your career has been like up until your position right now.

I was born in Inglewood, California, LA area, and then moved over to Bakersfield. I got hired on with the Sheriff’s department on September 11, 2006. When I first got hired, I worked for a couple of months in a jail as a custody deputy, and then after completing the academy, I was assigned to IV for three months for training. After that I went to Carpinteria, where I worked for the better part of six years as a patrol deputy. During that time, I volunteered my time to do some community resource stuff there—working with the schools and working with other community members to resolve a couple of issues. Recently, I transferred to the court services department, where I became a courtroom bailiff, where I worked arraignments. While working [there] this position in IV came up, so I applied for this position… and I was fortunate enough to come out number one.

As CRD, what is your job, what exactly are you in charge of?

To put it in layman’s terms, I am the middle man between the sheriff’s department and the community. And my job is to mainly address the concerns of the community and devote time to solving problems. Regular patrol deputies are responsible for a section or a beat, and they don’t really have time to get in depth with the community issues and find ways to resolve the issues, and that’s my job… I will be working directly with the university, the organizations that are part of the university, and also a part of IV.

You have been working as CRD close to a month. How has it been so far?

It’s been eye-opening. A great experience. I would say wonderful in a sense where I am really starting to get to know the culture of IV, and I have been approached and I’ve had an opportunity to meet so many wonderful people that share a common goal. And that common goal is to make sure that IV is the safest and best community that it can be. [A place where] homeowners, residents, students, property-owners, can all feel as though they’re in a safe and just community.

Do you have personal and/or specific goals you want to address during your time as CRD?

I wouldn’t call them personal because speaking with everyone, like I said, we all kind of share the same goals. We would love to attack the overconsumption of alcohol problem that we have here. We want to educate the community members and students of the dangers of overconsumption of alcohol and drug use—being under the influence and how that affects things. We want to also tackle the crime rate as it pertains to sexual assaults, batteries, and thefts and robberies. So my goal is to educate the community members/students on what to be aware of, and possibly how to prevent a majority of these crimes from occurring.

What is the most important piece of advice you can give to IV residents—specifically students?

Think before your actions. I would say, for anybody in general, always be safe. Be aware of your surroundings. Know there [is] law enforcement here, but we’re here to protect not only students, but the community members as well. Sometimes it seems as if all we do is enforce laws, but we only enforce laws to keep people safe. Know that your actions have consequences, and do all things with love, and with respect, and having your neighbors in mind. Treat people the way you would want to be treated. Treat women like you would treat your mother or your sister. Treat men like you would treat your… brothers or sons. Just do all things with love and be considerate and courteous of others and I think this community will thrive and everything will be okay.