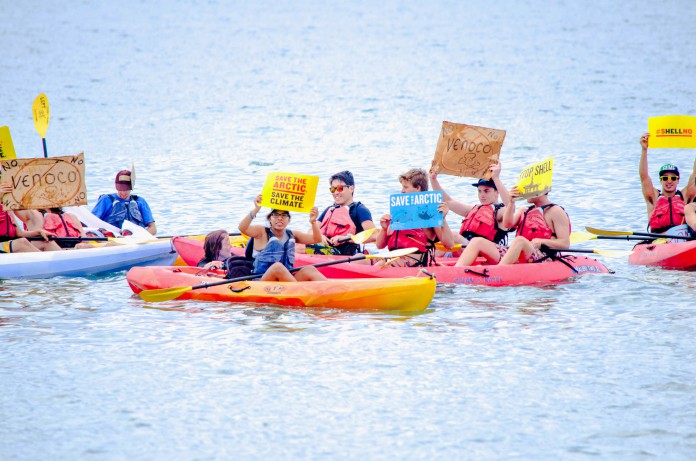 Local residents, environmental activists, and government officials rallied at Goleta Beach this past Saturday, July 18 in protest of Shell’s proposed exploratory Arctic drilling, as part of a national day of remembrance and action.

On May 11, Shell was granted approval by the Bureau of Ocean Energy Management (BOEM) to conduct exploratory drilling operations in the Chukchi Sea, an area just northwest of the Alaskan Coast. Experts from the U.S. Geological Survey believe the Chukchi Sea is home to an untapped reserve of nearly 30 billion barrels of oil and gas. For many Santa Barbara residents and other environmental activists, the news comes at a moment where drilling and oil are still at the forefront of their minds.

On May 19, the Central Coast was rocked by an oil spill at Refugio State Beach. In a matter of hours, a severely corroded section of pipeline burst, spewing an estimated 105,000 gallons of oil—21,000 of which made it into the Pacific Ocean. Following months of intensive cleanup and restoration efforts, totaling around $96 million, Refugio State Beach reopened to the public on Friday, July 17. Despite this, some residents and environmentalists remain wary of future spills—not just in their backyard, but also in the Arctic Ocean.

“We’re asking President Obama to say ‘Shell No’ to Arctic drilling,” said Samuel Sukaton, a Dirty Fuels organizer with the Sierra Club. Sukaton previously worked as an organizer for the “Yes on P” campaign during the 2014 midterm election.

According to a report released in April by the BOEM, analysts predict that any exploratory drilling or future development runs a 75 percent risk of causing one or more large oil spills over the lifetime of the Arctic leasing program.

Sukaton spoke to the effect exploratory drilling would have on both the climate and fragile Arctic ecosystem. “Even though there is a 25 percent chance [a spill] won’t happen,” Sukaton said, “there is a 100 percent chance of disruption.”

Among those in attendance were Congresswoman Lois Capps and State Senator Hannah-Beth Jackson, as well as County Supervisor Salud Carbajal and Santa Barbara Mayor Helene Schneider. Both Carbajal and Schneider are running to replace Capps in the 2016 congressional election.

Capps took the opportunity to speak about her experience as a champion of environmental issues. Touching on the impact of citizen advocates, Capps delivered words of support to those in attendance. “Big oil has money, they have influence, but they don’t have people,” she said. “This is the line in the sand right here.”

This past session of congress, Capps introduced two major pieces of legislation that strengthen coastal protection by barring hydraulic fracking and prohibiting future leasing in the Outer Continental Shelf off the coast of California. Tying the national discussion about oil drilling back to the local community, Capps took time to discuss the attempt by Venoco Oil to expand their operations in the Ellwood Oil Field area. “Don’t you think Venoco would figure it out?” Capps said. “The Central Coast does not want new oil drilling off the shore.”

According to Food and Water Watch organizer Rebecca Claassen, Venoco’s proposal poses an immediate threat to the Central Coast environment. “We’ve got an entire platform and processing facility that’s aging,” Claassen said, “we don’t want to be drilling more oil wells…in an aging infrastructure. We’re asking for another oil spill if we let this go through.”

State Senator Hannah-Beth Jackson reminded the audience of the importance of fighting for a clean environment—not just for themselves, but also for generations to come. “[The Earth] is not here for us to benefit financially from it, it is here for us to respect, enjoy, and pass on to the next generation,” she said.

For Jackson, the Refugio spill harkened back to stories about the devastating 1969 Santa Barbara Oil Spill. “We had a spill in 1969—many of you were not alive, but for those who were—it was one of the darkest hours in our stewardship of our planet,” she said. “It was because we allowed oil to be drilled irresponsibly and at all, that we found this coastline literally darkened and silent.”

Like Capps, Sen. Jackson has a strong record of environmental advocacy. In the wake of the spill, Jackson authored and introduced two pieces of legislation: SB 414 and SB 295. According to a legislative brief provided by her office, Jackson’s SB 414 aims to revamp the current oil spill response protocol and create a more responsive framework for dealing with future spills.

“Had they moved more quickly to suppress this oil spill when it happened, we would not see tar balls going 100 miles down the coast,” said Jackson. “We would not have had Refugio and other beaches in our area closed until this past week.”

Following the end of the rally, several attendees entered kayaks and paddled out to the waters of Goleta Beach. Many held signs that read “Save the Arctic, save the climate” while others displayed some that lambasted Venoco for pursuing more wells.

For Santa Barbara resident and rally supporter Sharon Broberg, being politically active is important when addressing the issue. “This generation is the first to experience global climate change,” she said, “and we’re the last to be able to really make a big difference. It’ll be much harder as the years go on.”

Third year environmental studies major and Co-Chair of UCSB Environmental Affairs Board Nicholas Frey paddled out as well, echoing similar sentiments. “UCSB is a really green campus,” Frey said, “but we can be very detached from issues going on around the world. This is solidarity for something that is affecting everyone.”

For Samuel Sukaton, it was refreshing to see diverse engagement and participation in Santa Barbara. “As somebody who knows it’s our generation that has to make the decisions to transition away from dirty fossil fuels and toward clean energy,” he said, “watching a community that’s historically active [participate]…is something that is really inspiring to me.”