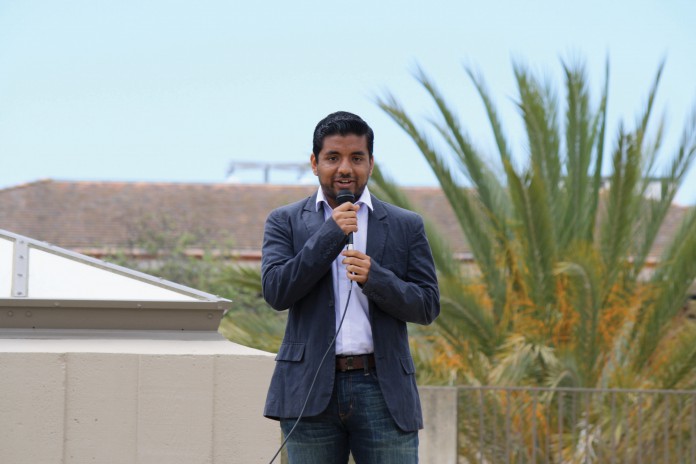 Students from the University of California, Santa Barbara rallied against UC tuition hikes on May 15 at Storke Lawn. The Office of the External Vice President of Statewide Affairs organized the rally, which served as the culminating event for a week-long campaign to raise students’ awareness of UC funding.

First-year political science major and fellow in the EVPSA office Kristin Hsu is the main organizer of the “We’re fUCked” campaign.

“The need for affordable and accessible higher education is what started this campaign,” Hsu said. “Personally, this issue resonates with me because I’ve seen so many of my peers have to forego an education at a four-year university because it’s too much of a financial burden.”

In light of UC President Janet Napolitano’s announcement of Governor Jerry Brown’s revised state budget labeled “May Revise” that freezes in-state tuition for the next two years but increases out-of-state tuition by 8 percent, third-year sociology and black studies major and EVPSA-elect Mohsin Mirza said it is not enough.

“So the UC want us to be happy with the news that we received yesterday,” Mirza said. “I remember reading that email; and Janet Napolitano, our president, was saying, ‘Thank you so much. This is such a great achievement, thanks for all your help,’ which I find interesting because she hasn’t been much help to any of us this year. But I’m not happy with this deal because I’m not happy with any deal that balances our future by the backs of other students.”

Hsu also mentioned that the May Revise is not a permanent solution.

“While the frozen in-state tuition is a small victory, we definitely acknowledge the fact that a percentage of our students are still getting fUCked,” Hsu said. “We realize that the May Revise today raises new questions regarding the direct effect that it has on students so we are definitely working on trying to figure out the next steps for our campaigning.”

Four large chalkboards with student quotes written on them were present during the rally. Comments like “We aren’t learning to learn, but to graduate” and “It’s food or an education” resonated with the audience.

“There’s a budget proposal that wants to cut $163 billion dollars from Pell Grants and many other programs that students heavily depend on,” Garcia said. “I believe that education is a right and I believe that it’s ridiculous that education has become a form of privilege and a commodity. Students are being exploited. Students are dollar signs for a lot of representatives and we need to do something about it.”

“[Tuition hikes] cause a larger housing problem in IV but is also causes students to have to take out more loans,” Dela Cruz said. “Because of this I had to take out an emergency loan and this is a damn shame because we are so fucked.”

Multiple speakers repeated the chant “Whose university is this? Our university!” throughout the event. They also mentioned they would begin lobbying in the next couple of weeks.

“I would like to see the UC Regents sympathize with the plight of students,” Hsu said. “I want them to understand that, although the opportunity of higher education is wonderful, the costs of pursuing it can oftentimes lead to more bad than good. Personally, I would love if they would be more willing to work with students on representing their interests and priorities.”