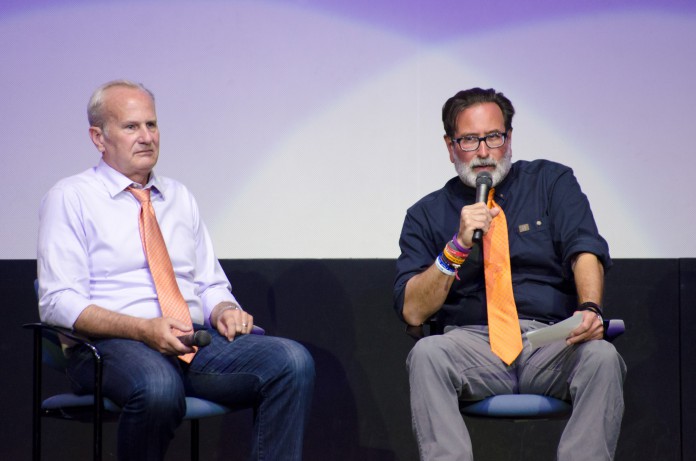 “If you’re an American between the ages of 15-24, you’re 42 times more likely to be shot and killed than in any other developed country in the world.”

This statistic was provided by Richard Martinez, the father of one of last May’s shooting victims Christopher Michaels-Martinez, in a talk with Bob Weiss, father of fellow victim Veronika Weiss, on May 18 at the University of California, Santa Barbara.

Coordinated by KCSB 91.9 FM and the Higher Education Action & Research Consortium (HEARC), the talk, titled “Turning Tragedy into Activism: Why We Got Involved in the Gun Safety Movement–A Conversation with Richard Martinez and Bob Weiss,” provided a discourse between the two fathers regarding their personal efforts to organize and mobilize after last year’s tragedy.

After an introduction by KCSB General Manager and fourth-year film & media studies major Yibing Guo, KCSB advisor Marta Ulvaeus, and Chair of HEARC Veronica Fematt, Martinez spoke to the crowd about his involvement with the nationwide gun control movement.

“Over the summer of last year, I traveled across the United States and took postcards personally to elected officials throughout the country,” said Martinez. “I delivered 60,000 ‘Not One More’ postcards to the Governor of Florida, and those 60,000 postcards were from people in Florida–that’s how wide reaching it was.”

Since last year’s tragedy, Martinez has remained a staunch advocate for gun control. Last summer, he began working with Everytown for Gun Safety, a bipartisan nonprofit group that aims to end gun violence and build safer communities. In this past election cycle, voters in Washington approved a historic piece of legislation which mandated background checks for people attempting to purchase a gun through both licensed vendors and private sales.

“When voters were given a choice about voting for sensible gun legislation, they voted for it–60 percent to 40 percent,” said Martinez.

During his talk, Martinez shared the story of Hadiya Pendleton, a 15-year-old high school student from Chicago who was killed one week after performing in President Obama’s second inaugural parade.

“This June second will be her 18th birthday,” said Martinez. “We’re going to honor that–her death and her life–by wearing orange on that day.”

Martinez explained that orange was chosen by her classmates to commemorate her life, and as a larger awareness symbol, as the color is often used in protective clothing for hunters.

Martinez closed off his remarks with a call to action for the audience.

“Don’t wait until it happens to people that you know or love, step up–do something,” said Martinez. “Sandy Hook happened, and I didn’t do anything, and I have to tell you–I wish I had. The only thing that is important to me anymore is trying to make sure that other kids like my son aren’t shot and killed in the way that he was. We can do better, but we have to do it together.”

Following Martinez, Weiss took the stage to address the audience. Speaking frankly and reminiscing about his time in college, Weiss commented that it was refreshing to see students both engaged and involved in the conversation.

“As a 59-year-old child of the ’70s–where political activism was as much a part of college life as anything else–we protested a lot,” said Weiss. “Activism was our culture then, and it seems like you youngsters only care about [other things.] It’s really good to see you show up and care enough to hear about what Richard and I have to say.”

Weiss discussed his continued involvement in the gun control movement, speaking to media regarding his personal experience and volunteering as time permits. He will be joining volunteers and supporters of the Campaign to Unload on May 21 to deliver a petition calling upon the UC Regents to financially divest from gun corporations and manufacturers.

“As you probably know, since you’re here, the University of California is invested in weapons manufacturing,” said Weiss. “They’re actually taking your money and investing it in companies that make guns. When I heard about that, I had to get involved.”

Using his time on stage, Weiss shared stories about his daughter Veronika–from her time in high school to her time at UCSB–with the audience.

“She loved it here, I never heard her complain about any aspect of college life,” said Weiss. “Not having to wash her own clothes, not having any money, eating dorm food–she loved every aspect of this university.”

Weiss ended his time by talking about the overwhelming support he’s received from the UCSB community, and the solace many people have found in it as well.

“You’ve got an amazing life here,” said Weiss. “Yes, we’ve had some terrible things happen in the last year, but we’re Gauchos. Even on my license plate it says proud Gaucho dad. I’m a Gaucho for life, and I’m with you.”

After their separate remarks, the two fathers took time to answer questions from the audience in a panel moderated by Ulvaeus.

When asked about the National Rifle Association, Weiss offered comments regarding its actions in lobbying on behalf of both gun owners and the gun industry.

“If the NRA didn’t think that changing laws was a threat to gun violence or just the ultimate freedom to buy whatever you want and use it without any responsibility, they wouldn’t be fighting it so hard,” said Weiss. “All we’re for is gun safety–we’re not against guns.”

Martinez also spoke about the impact of the loss of his son Christopher.

“You know it’s bad to lose a kid–everybody does–but until it happens to you, you have no idea,” said Martinez. “It takes you down to a place you’ve never been before–I’m telling you. If I could give up all the remaining days of my life for one more day with my son, I would. That’s how bad it is to lose a kid.”