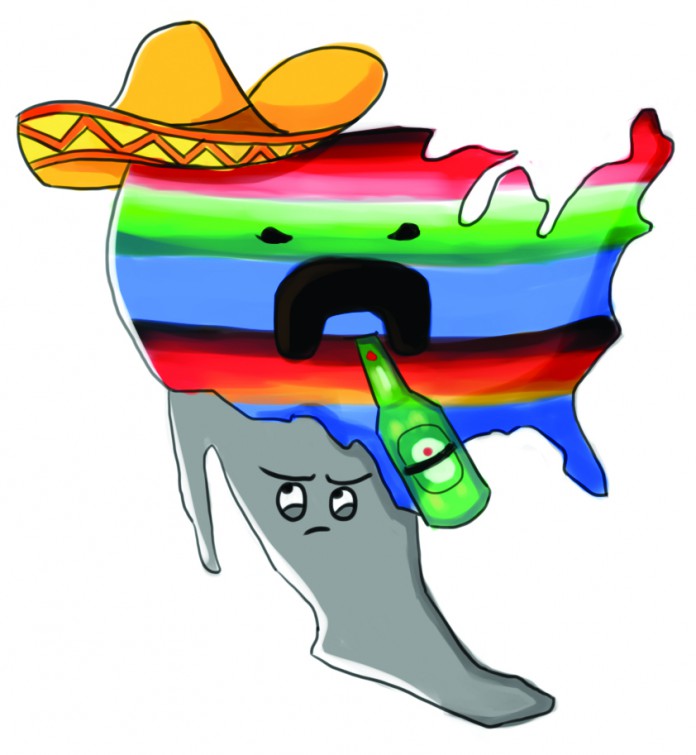 Growing up Mexican-American in California is interesting, to say the least. California, once being Mexican territory, is rich with Mexican influence, and so non-Mexicans obsess over your food, your language, your music, your culture and, of course, your nonexistent holiday. Newsflash: “Cinco de Drinko” is not an official Mexican holiday. Disculpame, Isla Vista residents.

Cinco de Mayo does exist and it has a noble history and background. The holiday derives from the Battle of Puebla, a battle in which an outnumbered Mexican army beat the larger and better-equipped French army in a miraculous victory in 1862 in the Mexican state of Puebla. It was a morale boost for the Mexican army at the time and brought a sense of national unity and pride to the country’s people.

Like many Mexican-American kids, however, my parents are not from the state of Puebla and do not celebrate the holiday that has been falsely known as Mexican Independence Day to many Americans. Mexico celebrates its Independence Day on September 16 and it is a joyous and voracious occasion when citizens gather by the millions in Mexican landmarks, like the Plaza de la Constitución in Distrito Federal (Mexico City). To be perfectly frank, Cinco de Mayo is nowhere near this level of celebration in the country—in fact, it is virtually uncelebrated in Mexico.

However, to those who come from Puebla or surrounding states, the holiday is a time for them to feel proud of their their roots and their people’s victory. Even to the majority who do not recognize or celebrate the holiday, it is a time for Mexican-Americans to be proud of the culture and hard work they have brought to the United States. But how can one feel pride amidst the binge-drinking and “fiesta”-ing of people like IV residents?

Day-drinking on Cinco de Mayo is a tradition in Isla Vista, but it is a tradition rooted in stereotype and ignorance. A holiday that has a noble history and is supposed to bring pride for the people who celebrate it is simply shrouded in and celebrated with bottles of tequila, a Spotify playlist entitled “Cinco de Drinko Turn Up,” a sombrero that was picked up at K-Mart, and a haphazardly glued-on felt, black mustache… by mostly non-Mexicans.

The U.S. has a well-known history of perpetuating caricatures of various ethnic groups. It is definitely not news that this country has a deep-rooted xenophobia, yet still appropriates much of the culture it ridicules. In older cartoons, for instance, African-Americans, Asian-Americans, and Jewish-Americans have been mocked, ridiculed and completely exaggerated. The film Dear White People centers around an African American-themed college party held by a group of elite white students and their caricatures of the ethnic group as a whole. Similarly, parties and day-gers held in the “honor” of Cinco de Mayo by non-Mexicans feature some of the most outrageous caricatures of Mexicans, and the “drunkard” stereotype is widely accepted and perpetuated. What is more demeaning than belittling a whole group of people by only recognizing and honoring them for one shallow trait?

It is true that Mexicans, as with many people regardless of ethnicity, are not immune to the love of the drink, but why is that the only trait out of thousands that Isla Vista residents choose to commemorate on this day? Using a nation of people and their culture and holiday as an excuse to drink and party is not the noblest act and, in fact, is incredibly degrading.

Mexicans are more than just the stereotypes that were thrust upon us to demean us: we are immigrants, hard workers, and people with families, dreams, and aspirations just like anyone out there. If one did a bit of research on Cinco de Mayo, one would see that the holiday was brought over to the United States by workers part of the infamous Bracero Program—the beginning of a long and complicated relationship between the United States and Mexican workers. They would learn about our contribution to this country—which isn’t just tequila.

So, Isla Vista, I ask you to please reconsider the cheap tequila, ponchos, and badly mispronounced Spanish words next year, and instead actually learn about the beautiful and long history and culture of people you seem to try to (inaccurately) embody on Cinco de Mayo.