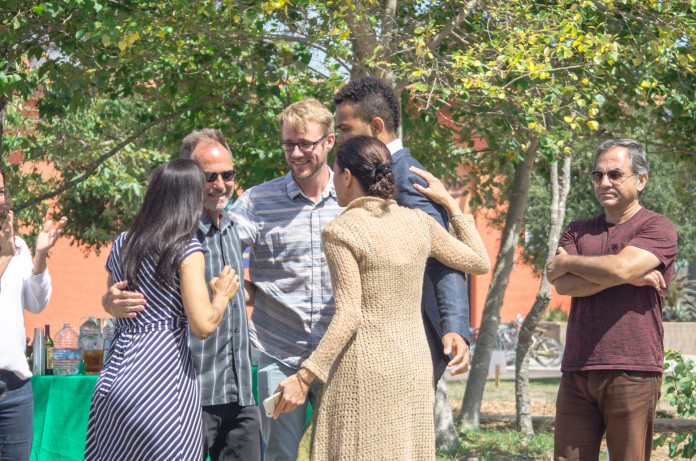 Ahead of the one-year anniversary of last May’s tragedy, members of the Isla Vista community gathered on May 16 in People’s Park for the dedication of a new remembrance garden. With representatives from university administration, student groups, and Santa Barbara County Officials in attendance alongside community members, local business owners and members of the media, the Isla Vista Love & Remembrance Garden was formally dedicated to commemorate the lives of George Chen, Katherine Cooper, James Hong, Christopher Michaels-Martinez, David Wang, and Veronika Weiss.

Information provided by the Isla Vista Recreation and Parks District website indicates that the Isla Vista Love & Remembrance Garden aims to create a space for “contemplation and celebration in memory of the student lives tragically lost almost a year ago.” The unveiling and dedication culminates a year’s worth of planning and development by the IVRPD, University of California, Santa Barbara Art professor Kim Yasuda, and Jordan Killebrew.

Killebrew, a UCSB alumnus, said he was spurred to action following news reports from that night.

“I was confused at first–I was in denial,” said Killebrew. “Not my IV, not my Gauchos. As articles hit in waves and information became readily available, I came to realize that the reality set in… The emotion of being helpless really struck home for me.”

In the wake of the shooting, Killebrew founded Project IV<3 (IV Love), which aimed to gather donations for the creation of a permanent Memorial Public Art Installation.

“I’m not a person who is one to sit down and do nothing,” Killebrew said, “so I felt compelled to make the website and start something.”

With his background as an artist, Killebrew designed shirts, and each purchase included a donation to the project. Partnering with Garrett Gerstenberger, UCSB alumnus and Owner of Isla Vista Screen Printing, Project IV<3 was capable of raising nearly $2,000.

“We did a kickoff fundraiser right away with Jordan to start the momentum,” said Glover. “We had approached some tech companies in [Goleta] and various businesses… and got good support from not just Isla Vista, but also the companies in town. It actually went beyond Isla Vista–I was pretty impressed.”

With 100 percent of the profits from that day dedicated to the project, Ambrose and Glover managed to raise approximately $5,000.

“The reason why we did this is to celebrate life—spring life—out of tragedy,” said Armistead

The plants—donated in part from the inventories of the Cheadle Center for Biodiversity and Ecological Restoration, and Southern California Edison—serve a dual purpose.

“All the plants flower in California and they will bring sustenance for the birds, bees and butterflies,” said Armistead. “We really wanted something beautiful to come out of this.”

Armistead also took time to deliver thanks to everyone involved in the process, notably the IVRPD Board of Directors. “We couldn’t have done anything without them,” she said. “We needed their approvals and their support, so we really appreciate them listening to our idea—from the naming of the park to what we wanted to do.”

When asked in an interview about challenges the project faced, IVRPD General Manager Rodney Gould explained that they were far outweighed by the overwhelming support the community extended. “People worked with us on timelines, people discounted prices, people donated things,” Gould said. “It’s always difficult when you’re asking people for things for free, but everyone gave willingly.”

After Armistead, 3rd District Supervisor Doreen Farr took some time to speak. “I have never been prouder of Isla Vista than I am at this moment,” she said.

Farr, who has represented Santa Barbara County’s third district for the past seven years, spoke highly regarding the outpouring of community support the project has seen. “It is triumphant that this community wasted no time after May 23, 2014, to come together and show their resilience, determination, courage, and sense of community–to build a beautiful and lasting memorial in honor of the lives of their brothers and sisters in this family of residents that we call Isla Vista,” she said.

Later in an interview, Farr spoke in awe of the greater importance of the memorial garden. “To have something tangible like this as a memory to the six students–but also to the collaborative effort it took between the university and community–I think is something that is amazing,” she said.

Farr hopes that this project will not be the last collaborative effort, as she felt it was positive in bridging the divide between the UCSB and the greater Isla Vista community. She felt the garden encapsulated the collaborative spirit that she felt should serve as a template for future projects.

Next, UCSB Chancellor Henry Yang spoke to the audience regarding the park and everything he felt it represents.

Yang, who had met with the parents of George Chen and James Hong the week before, spoke about the strong ties people would have to the benches. “This is a place all of us–early in the morning or late at night, anytime you sit here–can connect with those precious lives that left us way too soon,” said Yang.

The remarks Yang delivered were not prepared, as he wanted to connect with the crowd on a more personal and intimate level. In prepared remarks provided exclusively to The Bottom Line, Chancellor Yang said that “as our community continues on the path toward peace and healing, this garden will be here to help us—a symbol not of our sadness, but the support and sympathy that we can offer each other, and especially, to the friends and relatives of the six victims.”

Following Yang’s remarks, James Glover shared the story of his involvement in the planning and coordinating process. Glover, who moved to Isla Vista when he was 19, said he was honored to be involved with the project from it’s inception.

“I’ve had very mixed emotions,” said Glover. “I wasn’t personally friends with the victims; however, the whole process of creating something to honor them for IV has been really great. It’s been healing for myself, and I would hope the community of IV as well.”

Glover briefly touched on the power of community engagement and the solidarity that he has experienced in getting involved with the memorial coordination. “It’s tough that these tragedies happen, but it’s great to see the community together working to make something like this happen—to remember, together, everything that this community means.” Glover spoke highly of the other members of the coordinating team, and delivered thanks to everyone else that had been involved.

Yasuda followed Glover’s remarks, and introduced Killebrew and two student artists, Caila Baltas and Jonathan Holcomb, who designed the patterns for the six memorial benches. Prior to the design process, the artists were provided information from the families of the victims about their lives, interests, and personalities. For Veronika Weiss, Holcomb was able to incorporate her initials and immortalize her love for water polo. Both Baltas and Holcomb conveyed that their ability to use art for remembrance was a great honor.

Additionally, Yasuda discussed the manufacturing process for the benches. Hoping to encapsulate a spirit of renewal, Yasuda mentioned that the tops of the benches were fabricated by a local craftsman, Guner Tautrim, from fallen eucalyptus and cypress trees surrounding IV parks and Coal Oil Point.

According to Yasuda, “the curves on the benches, if they were to be put in a circle, would form a perfect circle.” The intention of this design was to invoke a sense of unity between the six separate victims, and provide a semblance of comfort and healing.

Closing out the dedication ceremony, Killebrew extended some final remarks to all those in attendance. “A year ago I would have never imagined that this would have happened–never,” said Killebrew. “I’m just so happy that I have an opportunity to do something for the victims that were lost.”