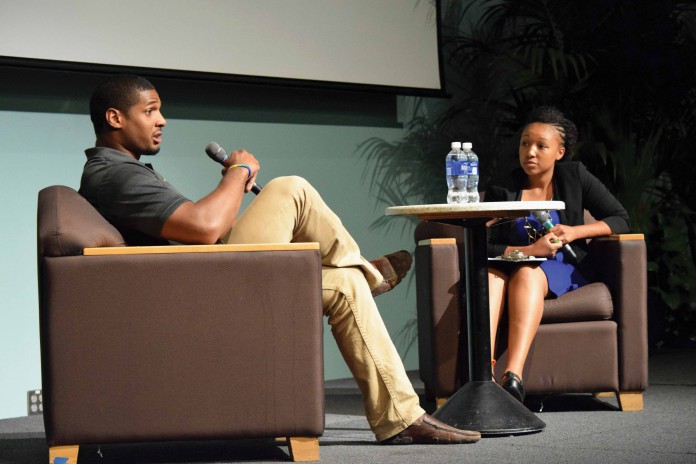 Michael Sam, the first openly gay NFL player, discussed his experiences and offered advice to students during an event held by the Resource Center for Sexual & Gender Diversity (RCSGD) at Corwin Pavilion on Monday, May 4.

​Sam was selected by the St. Louis Rams in the 2014 NFL draft and drew heavy media attention during his time in the NFL, which also included a brief stint with the Dallas Cowboys. Fourth-year communication and feminist studies double-major Kashira Ayers moderated the discussion, during which Sam spoke at length about his life and experiences at the forefront of media attention.

​Sam began by talking about his family, saying he was abused by two of his older brothers when he was a child. He also spoke about his parents’ reactions when he came out to them as gay.

​“My mom kind of knew that I was different and she had some stuff to say, but she still loved me and supported me,”  Sam said. “My dad had some stuff to say, but not to me, but to the New York Times. He pretty much said that he didn’t agree with my lifestyle… it’s been over a year and I haven’t said a word to him. I still love my father, but I can love him from afar. “

​Sam said being drafted into the NFL was a difficult and emotional process, but finally being selected was fulfilling.

​“The draft was just three long, long days,” Sam said. “Those were the longest three days of my life, just waiting to see if I was going to be in the NFL. The moment I got my name called, there wasn’t a dry eye in that room… it was a great moment.”

​“Make sure you’re keeping it professional,” Sam said, in an interview after the event. “Don’t care about what that person’s lifestyle is, because in the end it doesn’t matter what it is, it’s about whether that person’s doing what he’s supposed to on the court or on the field.”

​Sam said his fiancé Vito Camissano encourages him to be an inspiration to youth and supports him through difficult times.

​“When I felt weak several times, he gave me the strength to be stronger,” Sam said. “He made me realize that doing this is such a big deal, and if kids are unsure about their sexuality they can look at this and think, ‘He has the courage to come out, he’s trying to make a difference in the world, and so I can come out and try to make a difference in the world too.’”

​Ayers read questions to Sam submitted by students during the initial discussion. Afterwards, there was a question-and-answer session, during which students were allowed to ask questions to Sam directly. She also spoke about her own perspective as a member of both the black community and the LGBTQ community on campus.

​“It’s an identity that I hold myself,” Ayers said. “It’s important to me that I speak my truth, being a black queer woman on this campus and so I wanted to be inclusive as possible with my own story, because we have a similar story being part of the black and LGBTQ community.”

​Fourth-year sociology major Brianna Wiles said the source of her interest in the event was her personal experiences as part of the LGBTQ community.

​“I personally identify as gay, and I came here with my girlfriend. I work with LGBTQ youth and I’m also an athlete, so I wanted to come see what Sam had to say.”

​Wiles also said Sam’s recollections of coming out to his parents were striking, as she often has to hide her sexuality to parents she encounters while working with youth.

​“It’s a situation where I’m open but I’m not open to all the parents because I don’t know what their reaction to me teaching their kids would be like,” Wiles said. “I think it’d be interesting to hear his perspective on how to come out to parents so it’d be easier for them to accept you.”

​Second-year mathematic and financial statistics double-major Sumit Kumar said the football community’s acceptance of Sam was a stepping-stone for the advancement of the LGBTQ community.