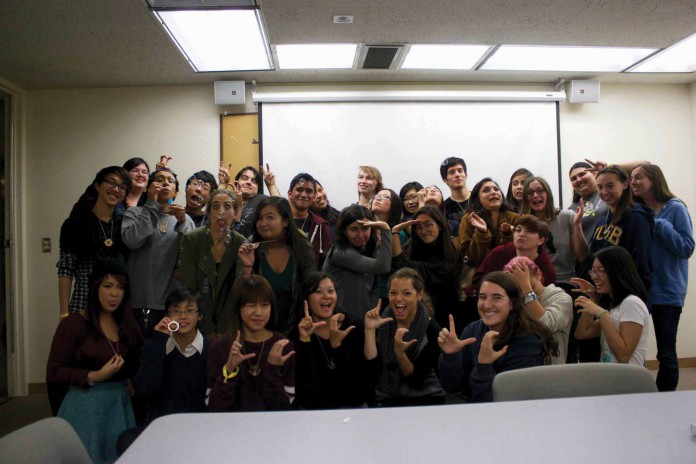 “People have fallen out of love with the printed word and writing,” said Ivy Kuo, president of University of California, Santa Barbara’s Literature Club. “We want to foster a creative space for book worms and literature lovers to interact and meet each other.” With 100 members, 40 of whom are active, the recently revived organization has succeeded in doing just that. After attempts to begin an English Club two years prior, Literature Club (Lit Club) came to fruition last year, and they have been eager to get their name out on campus.

Second-year English major Kuo said that she was surprised when the former Lit Club president stepped down from his position, effectively elevating her from her previous role as Vice President. “I was taken aback when I found out, because I didn’t expect to become president as a second year,” she said. However, her surprise leadership position has proved to be a great opportunity to use new ideas to help fund the club and get their name recognized.

Kuo is hopeful that their events will continue to attract new members, and she stresses the open atmosphere of the club in accepting members from any major, not exclusively those that are literature related. Because UCSB is a research university, there is often a high level of importance placed on clubs related to STEM fields. Kuo hopes that the Lit Club can provide an important atmosphere for anyone to enjoy the arts, and stated that they even have some STEM major members who find the club to be a welcome break.

True to their name, the club hosts an array of literature related events as well as maintaining a theme for their meetings throughout each quarter. Last quarter, the group chose a Harry Potter theme, sorting its members into the book’s four houses and then competing for a house cup. For spring quarter they have adopted a Hunger Games theme and even put on arena events where people “fight” each other to be the last competitor and become a Champion for their District.

One of the club’s most successful events so far has been their quarterly Blind Date with a Book fundraiser. For the fundraiser, the club buys used books from local thrift stores, wraps them in brown paper, and then writes some themes, genres, and/or plot lines on the paper. This way, students are unable to “judge a book by its cover” and must instead buy a book based solely off the written scribbles.

Kuo states that this fundraiser has been successful enough to entirely fund the club and has even allowed for them to take members on a field trip to the Last Bookstore in Los Angeles. The rest of their funds are used to host speaking events, where local publishers and authors are invited to help anyone interested in working in these fields and learn about prospective careers. So far, many of their speakers have been UCSB alumni, but Kuo hopes more fundraising can also lead to bringing in outside literary minds.

Lit Club also hosts monthly open mic nights at Coffee Collaborative in Isla Vista. These events not only allow people to perform spoken word or read their poetry, but also encourage musicians and comedians to participate as well. Their next open mic night will be Thursday, May 14 at 8 PM, and is a collaborative event with UCSB Poet’s Club.

Kuo hopes that the Lit Club can reach out to other literature and arts organizations on campus to create more collaborative events that will encourage others to participate in these creative outlets. “Lit Club has grown a tremendous amount in the past year, and I am so thankful to the dedicated officers and loyal members for making our previously small org such a success,” said Kuo. “I’m ecstatic that there’s now a place in UCSB for bookworms to openly discuss novels, literature, and geek out with our nerdy themes.”

She, along with the rest of Lit Club, hope to continue creating an open space for creativity and enjoyment of the arts within UCSB’s campus.

UCSB’s Literature Club meets every Monday at 7 pm in South Hall, Room 2635 and is always welcoming new members. Information on any of their upcoming events can be found on the groups Facebook page: https://www.facebook.com/groups/UCSBLitClub/.