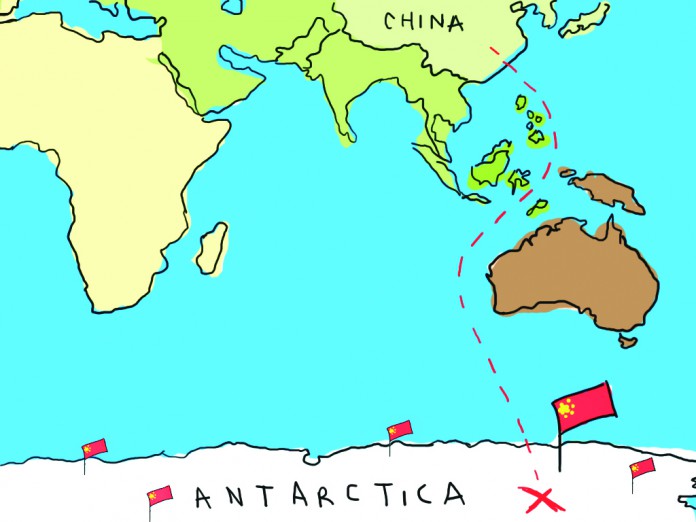 China’s need for long-term resources and further climate change data has led the nation to the Antarctic, where it plans to establish a fifth research station.

Since 1985, China has been present in the arctic, but it has only now established itself as a frontrunner in the quest for scientific discovery and economic resources.

China’s leader, Xi Jinping, has signed a five-year agreement with the Australian government that allows Chinese icebreakers to replenish their food and fuel at an Australian port before heading south. This event was seen as a significant step in China’s expanding presence in Antarctica.

“Today, we are already standing at the starting point of a brand-new historical era, of striding toward becoming a polar-region power,” said Liu Cigui, the director of the Chinese State Oceanic Administration.

Although Antarctica’s harsh climate makes scientific research in the area incredibly difficult and expensive, 30 countries currently operate research stations there. With four research stations and a fifth in the making, China certainly is catching up fast. Australia has three bases, and America is in the lead with a total of six.

Chinese scientists hope to be the first to drill and recover the longest ice core yet obtained. The Europeans managed to obtain a two-mile-long ice core, but if a longer one could be extracted, researchers could analyze the bubbles in the ice to determine the fluctuations in temperature and carbon dioxide throughout the Earth’s history. This would allow researchers to observe climate change indicators from up to 1.5 million years ago.

Extracting these ice cores is an expensive and delicate procedure, and everyone who has tried to beat the two-mile-long ice core record has failed. The Chinese are currently drilling at Dome Argus, the highest point on the East Antarctic Ice Sheet.

While their apparent motive is research-based, there has been much conversation regarding whether this is China’s only motive, and others involved in the Antarctica territories have raised concerns about China’s “Strategic Interests”. Although the Chinese have committed to the Antarctic Treaty System, skeptics believe that China may be working their way toward changing the Antarctic Treaty System in order to exploit the area for mineral and energy resources.

Yang Huigen, director general of the Polar Research Institute of China, hints at this as well, saying “So far, our research is natural-science based, but we know there is more and more concern about resource security.”

The economic resources in Antarctica are abundant but illusory. Because of the extreme climate, the thick ice, and the short working period, not much is known about what oily treasures lie beneath the ice, but there is much speculation.

Geologically speaking, one can predict the resources found in a certain area based on those found in an area that was created at around the same time and through the same geological processes. Explorers are hoping that the coal, oil, and minerals that are found in South America, South Africa, and Australia will also be present in Antarctica. Coal deposits line the coast and the Transantarctic Mountains, where they’ve rested for 30 million years since the Antarctic was covered with swamps. The ice that conceals the minerals is a resource in itself, holding 90 percent of our Earth’s fresh water. The ocean around this ice is teeming with krill, which Chinese corporations have begun to fish extensively, increasing harvest to two million tons of krill per year.

“This is part of a broader pattern of a mercantilist approach all around the world,” says Peter Jennings, the executive director of the Australian Strategic Policy Institute, “A big driver of Chinese policy is to secure long-term energy supply and food supply.”