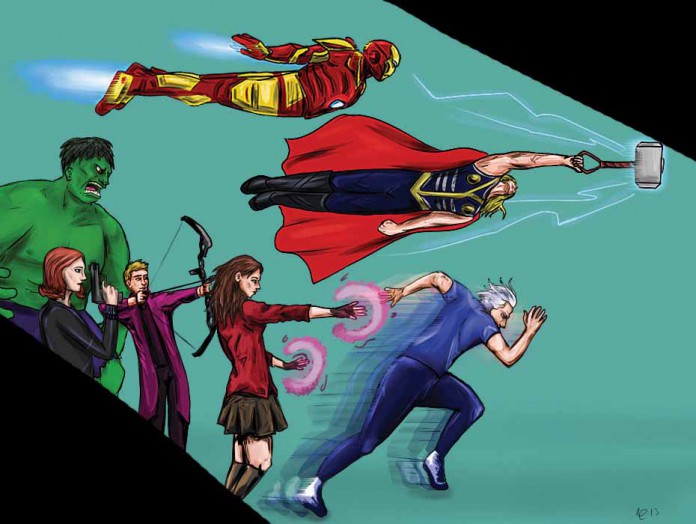 When considering the totality of what Joss Whedon was faced with while writing and directing Avengers: Age of Ultron, it seems apt to think of him as a sort of cinematic Atlas. Tasked with executing a quarter-billion dollar budget, meeting the exorbitant expectations of a global fan base, balancing the bloated cast of heroes, villains, and associates, charting the course for the future of the Marvel Cinematic Universe, while still finding a way to inject the witty banter and characterization that made the first Avengers so great, Whedon’s burden certainly seemed like one of mythological proportions. That he was able to bear its weight and deliver it to us in the form of another spectacular Marvel installment simply serves to remind us that Whedon is, in fact, a superhero-film-making titan.

In the Avengers’ second go-around, the world is imperiled when the attempts of Tony Stark/Iron Man (Robert Downey Jr.) and a hesitant Bruce Banner/Hulk (Mark Ruffalo) to create an artificial intelligence network that can actively detect and defend against global threats gone awry. Instead of the “suit of armor around the entire world,” that Stark wanted, he creates the malicious Ultron (voiced by James Spader), bent on destroying the Avengers and then Earth (don’t be fooled by the trailers, Ultron is not the uber dark villain they portray him to be—he takes a break from waxing apocalyptic to deliver some solid zingers). This leads Iron Man, Hulk, and the rest of the Avengers—Captain America (Chris Evans), Thor (Chris Hemsworth), Black Widow (Scarlett Johansson), and Hawkeye (Jeremy Renner)—on a mission to stop Ultron from bringing about the global annihilation he so desires.

As these events unfold over the film’s two and a half hour runtime, it becomes quite clear that there is a lot going on. Even more heroes are introduced and added to the fray. The action sequences are more elaborate and havoc-wreaking than ever (though, refreshingly, there is more of a concern about the casualties and destruction than is typical for this type  of movie).

Is the film overstuffed? Probably. With more time dedicated to action and plot, there isn’t as much room for the quieter, more personal scenes of the Avengers bickering and bantering that Whedon specializes in; a natural byproduct of having so many characters is that some will be left with half-realized characterizations. It’s a shame that new heroes Quicksilver (Aaron Taylor-Johnson) and Scarlet Witch (Elizabeth Olsen) don’t receive more development and back story, but as I watched them mow through bad guys with their awesome powers alongside the rest of the Avengers, I realized that I didn’t care. Sure, the cup that runneth over will make a mess, but how much of a concern should that be when what’s being poured is this delicious?

The brimming nature of Age of Ultron seems to be the movie’s biggest criticism so far, but it was also inevitable. Hollywood’s superhero culture grows bigger by the year, with the market yet to show signs of superhero fatigue. Did anyone expect Marvel not to throw more of everything into the sequel of the third highest grossing film of all time? Age of Ultron is not the revelation that the first movie was, but it’s still so damn much fun. To write it off because it is too big would be to fly in the face of the very concept of the Avengers. There is supposed to be an overloaded roster of superheroes. Shit is meant to hit the fan and fly in every which way. Ultimately, how you feel about the sprawling messiness will dictate how you feel about the film as a whole. Toward the end of the film, there is a mesmeric slow-motion shot that circles all of the Avengers as they battle a horde of Ultron’s robots in the claustrophobic and chaotic confines of a ruined cathedral; the CGI-riddled shot has a distinct, vivid aesthetic, and the whole thing is reminiscent of a full-page splash panel in a comic book. I did not see this shot and think that it was too much or over the top; I saw it and knew that I was in pure blockbuster bliss.